Early Saturday morning, they came to talk about sex and they didn’t hold back.

“The hook-up culture is really like eating French fries off someone’s plate,” said Hearst’s chief content officer and former Cosmopolitan editor-in-chief Joanna Coles. “You think they don’t have calories and that they’re delicious. But a half an hour later you’re full of remorse.”

For Teen Vogue writer Lauren Duca, knowing what you want is key. 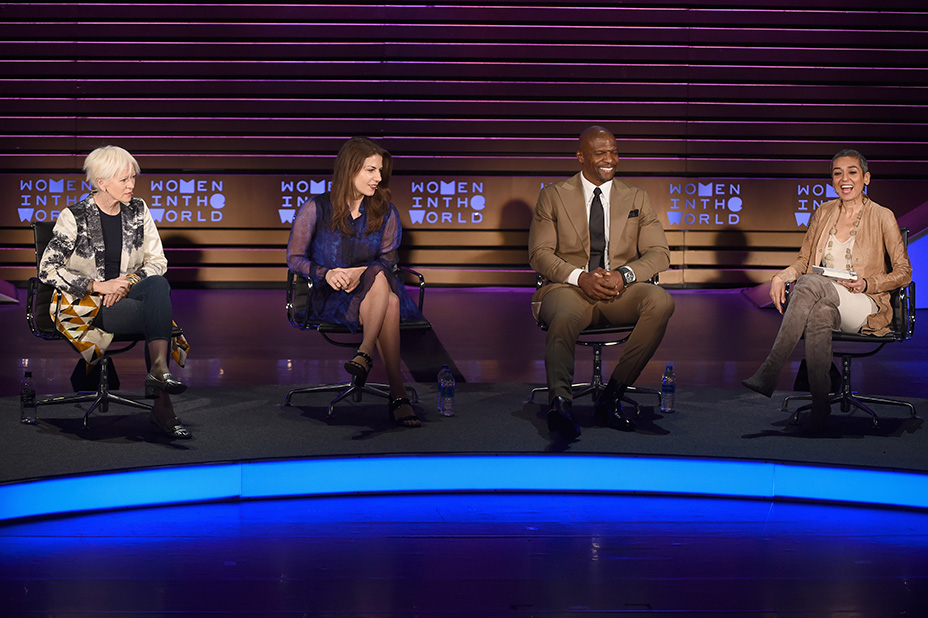 And for actor and activist Terry Crews, women need to understand where a guy is all-too-often coming from.

“Masculinity can be a cult,” the Brooklyn Nine-Nine star told a rapt audience. “And when I say cult, it’s no different than David Koresh or Jim Jones.”

To illustrate, Crews told of visiting strip clubs in his football-playing days. “And the woman sits down and once she starts talking about her kids or anything in her life, it’s like ‘stop, stop,’ because you’re becoming a human before my eyes,” he said. “I don’t want you to be a human. I want you to be something pretty to look at. But as you talk, you’re making things too real for me.”

Crews added he has taken some heat from his fellows for divulging their “game” as he put it, as he joined his fellow panelists onstage at Lincoln Center for the final day of the ninth annual Women in the World Summit led by Tina Brown.

Panel moderator Zainab Salbi, host of PBS’s #MeToo, Now What, had gotten things rolling off the bat by asking about the epic and very public clash of expectations involving actor Aziz Ansari and a woman he went out with on a date.

To Coles, whose new book Love Rules looks at sex in the digital age, it was but an example of the conundrum of online dating, a “computer-mediated communication which is not the same as communication in real life” with four selves at work — “a man and a woman’s computer self and their real-life self.”

Teen Vogue’s Duca said she could not have been more frustrated with the dialogue around the Ansari debacle.

“It was complicated and there were gray areas,” she interjected.  “I think it showed a moral panic within the #MeToo movement, when there was not an obvious, black and white, ‘here’s the villain’ and ‘here’s the victim.’ We need to be able to have a more nuanced conversation about consent.”

Ultimately, she added, the bedroom “is not an egalitarian space” and that during sex (though she put it a little more directly) is probably not the time “to live my feminist theory, if that’s ok,” getting a roar of approval from the audience.

“If we could actually move to an understanding that sexuality is not a coin to be traded but that it’s a renewable resource,” she said. “And (if) we could just be more positive and move to enthusiastic consent, I think we could all be having better sex.”