Perhaps the biggest challenge for the designers behind Rebecca — Netflix’s adaptation of the classic 1938 novel (which became an Oscar-winning 1940 film) — was finding one house that could fill the role of Manderley, the estate of Armie Hammer’s aristocratic character, Maxim de Winter, and where his second wife (played by Lily James) comes to live.

“Manderley is such a massive character,” says BAFTA Award-winning production designer Sarah Greenwood, who in the end decided that she “could not find everything in one house” and instead relied on a combination of eight English country houses with the right mix of rooms that fit each of the characters.

The result is imposing and intimidating, with touches of foreboding and gloom, blending Elizabethan, Georgian and Edwardian styles and including a showstopping bedroom for the late Rebecca (de Winter’s first wife) that could easily be featured in today’s Elle Decor. “The room hints at Hollywood glamour as she would have been very glamorous and sophisticated if we had ever seen her,” says Greenwood. “Our approach was, Rebecca would have gotten these decorators from London such as Elsie de Wolfe and Syrie Maugham, so we used them as references. This was her deliberately breaking the rules of the house.” 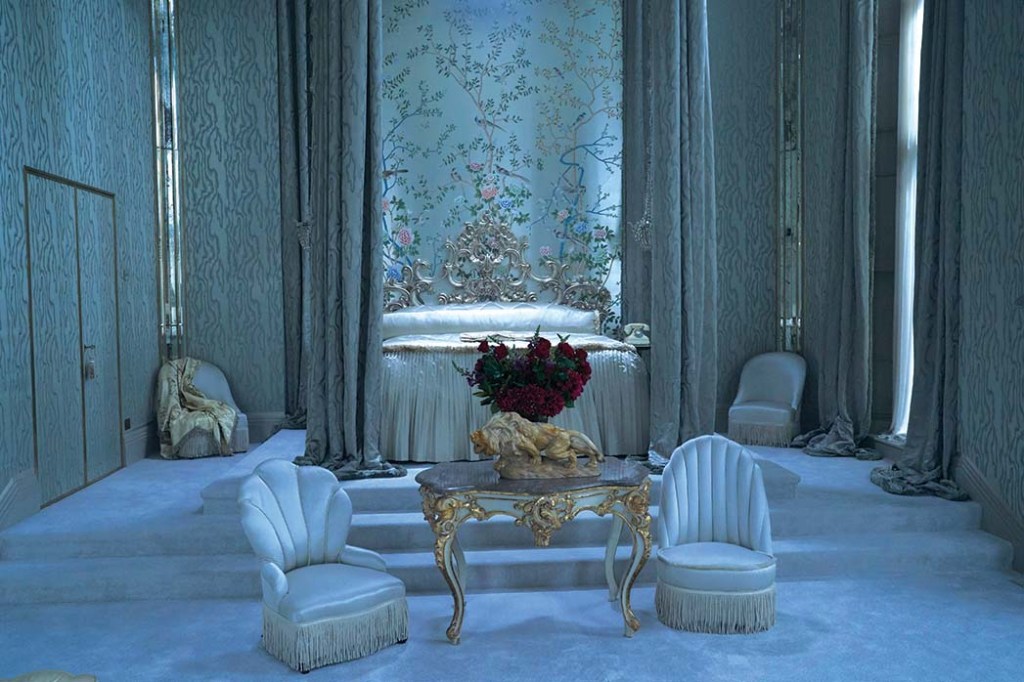 When it came to the film’s outfits, costume designer Julian Day looked to the original source material for cues, noting that Rebecca novelist Daphne du Maurier was “all about female embodiment,” developing the once-meek protagonist into a powerful force by the end of the story.

Keeping the costumes fresh and modern yet period-appropriate, Day found inspiration in Katharine Hepburn, Greta Garbo and Marlene Dietrich for James’ wardrobe, which translated into pants, turtlenecks, berets and masculine suiting. “I found a great picture of Garbo on a passenger ship, and she is elegant, sophisticated and feminine but powerful. I wanted to get that across on Rebecca,” he says. “The ’30s is one of those eras that was revolutionary in fashion. Without the ’30s, there would not have been the ’70s as [fashion designers] Ossie Clark and Celia Birtwell borrowed from that period.”

The costumes for the film’s scenes set in the sun-drenched French Riviera are a marked contrast as James is dressed in feminine silks, prints, ruffles, linen palazzo pants and straw hats while Hammer sports a light gold suit, custom designed by Day. “Arriving at Manderley, Maxim sheds his French laissez-faire style for old heavy tweeds, crumpled suits and heavy cords,” the costume designer details. “I wanted to slowly incorporate the style of the house for the lady of the manor, so I used tweeds and wool suits, which was a difficult task for Lily’s character.” Dressing Mrs. Danvers, the evil housekeeper played by Kristin Scott Thomas, involved the creation of only one signature suit. “Mrs. Danvers is like a dominatrix, and I took a ’30s suit with a clinched waist to separate her from the staff,” says Day. “She is very wounded after Rebecca’s death, so I used colors that were like a bruise such as blue, maroon and ochre.”

The Ben Wheatley-directed film — which debuts Oct. 21 — is high style, sophistication and beautiful color, while retaining the haunting aesthetic of the Gothic horror tale.