To Axel Alonso, there’s something that comic books are capable of that no other media can match. “Comics are the ideal medium for producing truly ground-breaking work that creates IP that can come alive for generations,” he tells The Hollywood Reporter. “Comic fans are in the vanguard of pop culture — they are incredibly discerning, so when a character, story or series resonates with them, you know you have a hit on your hands.”

Alonso knows what he’s talking about. As editor, and later editor-in-chief, of Marvel Comics from 2000 through 2017, he was a key figure in guiding the company from bankruptcy to the cultural behemoth it became, returning key franchises such as Spider-Man and the X-Men to fan-favorite status. Since 2018, he’s been chief creative officer and editor-in-chief of start-up publisher Artists, Writers & Artisans, one of a new generation of comic publishers positioning themselves as the next Marvel to not only fans, but potential investors and business partners.

Those would-be competitors, including AfterShock Comics and Valiant Entertainment, are cultivating a financial model that focuses on a leaner publishing output. In comparison with indies like Image, Boom! Studios and Dark Horse Comics, the new guard is smaller in size but arguably more centered on potential film and TV adaptations.

That has attracted the attention of business partners: Valiant — a 2012 relaunch of a publisher founded in 1989 — was bought by DMG Entertainment in 2018; mogul James Murdoch invested $5 million in AWA in 2019; and AfterShock merged with distributor Rive Gauche last year. (They’ve also hired away from Marvel. AWA’s founders include not only Alonso but also former Marvel publisher Bill Jemas, while Valiant Entertainment’s reboot added former Marvel CEO Peter Cuneo as chairman.)

Valiant publishes a Marvelesque shared universe of superhero properties, while AfterShock focuses on unrelated sci-fi and fantasy series envisioned as mini-franchises. (Two such successes: Animosity, optioned for a movie at Legendary, and Undone by Blood, being developed for TV via Norman Reedus’ Bigbaldhead productions.) AWA features a shared universe guided by Sense8 writer J. Michael Straczynski that’s published alongside properties created by the likes The Boys co-creator Garth Ennis. 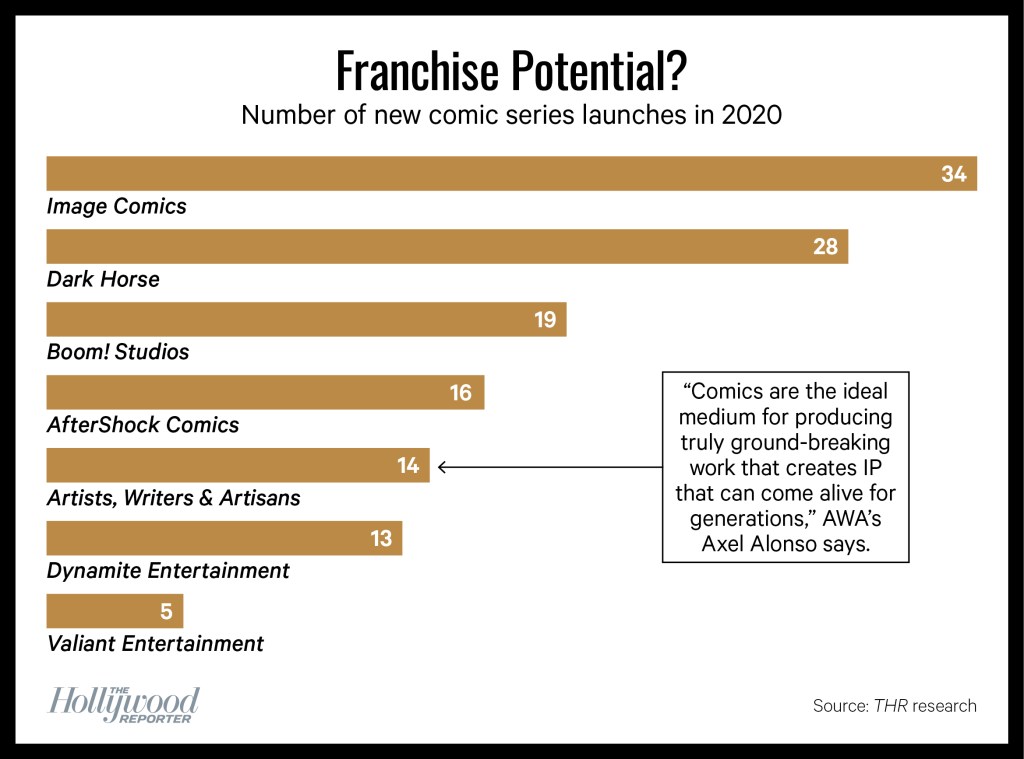 As a famously fast and cheap medium — at least in comparison to television and especially movies — the appeal of using comics as proof of concept is hard to ignore, but simply printing a comic doesn’t lead to getting optioned.

Publishers are developing franchises with Hollywood talent — think Boom’s successful BRZRKR series, co-created by Keanu Reeves — in order to produce intellectual property for film and TV development. That has led to publishers setting up production deals without having even released a comic, as was the case in 2019 with Paramount and Atlas Comics, a new company using IP from a defunct 1970s publisher of the same name (that agreement has yet to produce any tangible results).

“It shouldn’t need to be said, but this industry is rife with companies that are little more than IP farms,” says Jon Kramer, CEO from AfterShock Comics. “The only way to be genuinely successful in this space is to be true to comics, their creators and their fans. There are no shortcuts.”

Marvel has a stranglehold on the comic book sales market, with the Disney company claiming slightly less than half of all single-issue orders in any given month — in the region of 3 million copies in North America alone. By comparison, newer publishers tend to hover around 1 percent market share, although that figure also reflects smaller publishers’ reduced volume of product compared with Marvel’s roughly 70 single issues per month.

Marvel’s dominance also poses a problem when it comes to adaptations. Last year’s Bloodshot from Sony — the first Valiant property to hit the big screen, although Harbinger and Faith are both also in development — was the first non-Marvel or non-DC theatrical release adapted from comics and not based on a preexisting movie property since 2014’s Kingsman: The Secret Service. (Bloodshot, which was released last March 13 in the U.S., grossed $34 million worldwide and had its theatrical run cut short by mass theater closures amid the pandemic.)

While studios have optioned titles from indie publishers — with deals in place for everything from Dark Horse’s Black Hammer series (Legendary) to AfterShock’s The Kaiju Score (Sony) — they’ve been slow to bring them to the screen; Valiant’s Harbinger was in development at Sony for four years with Arrival screenwriter Eric Heisserer attached before Paramount picked it up in late 2019. It remains unscheduled.

The landscape is better in streaming, where The Old Guard from director Gina Prince-Bythewood was a Netflix success, with a sequel greenlighted this year. The streamer also is set to debut Jupiter’s Legacy on May 7, the first result of its 2017 purchase of Millarworld, the comics studio set up by former Marvel writer Mark Millar. (Further Millarworld projects including American Jesus, Supercrooks, and Huck, are already in development.)

Netflix and Amazon Prime also have turned Dynamite Entertainment’s The Boys, Image’s Invincible and Dark Horse’s The Umbrella Academy into series. In that respect, the model may be Robert Kirkman’s Image Comics series The Walking Dead, which went from a black-and-white comic book series to a massively successful television franchise supporting three ongoing series for AMC.

Kirkman’s success speaks to something at the heart of the publishers aiming to position themselves as the next Marvel: a trust in the creator’s vision to head toward unexpected places that audiences respond to, as opposed to corporate or editorial mandates to maintain specific brands. That attitude has translated into publishers allowing creators to maintain some level of creative and financial control over their comic book work — in a way that isn’t necessarily the case at Marvel or DC — as an incentive for creators to offer up their best work.

“Without an appealing concept and story there is no [media] afterlife,” AfterShock’s Kramer argues. “The idea that a company can enter into the comic space solely to make movies, TV, video games, et cetera, is a pipe dream. Reality dictates that the story needs to be embraced by the comic audience first before any consideration can be given to adaptation into another medium.”

Without their best efforts, publishers argue, the comic audience won’t respond to the work — and without that positive fan response, all is lost. “It’s a medium where creators can take risks on the projects they choose and audiences can take risks on the material they buy,” says Alonso. “If we as an industry remember that we hold this unique position in the media landscape and can take it to heart, we will continue to be the place where other media looks for the future.”