If Forbidden Broadway and the John Hughes teen films that ruled the ’80s had a queer baby, it might look something like the frothy new musical comedy, The Prom. That means the show is one part satire, packed with delicious theatrical in-jokes delivered with aplomb by game stage veterans playing caricatures of themselves; and one part inclusivity teaching moment, reminding us there’s a place for everyone beneath the Mylar balloons at a high school dance, even in conservative Indiana. If the two halves aren’t entirely seamless, especially in the uneven second act, the show has enough humor and heart to paper over the cracks.

With its elements of cruel ostracism in the high school corridors and its buoyant dance explosions of adolescent hormonal vitality, The Prom sometimes seems just a short hop from director-choreographer Casey Nicholaw’s last Broadway success, Mean Girls. But the affectionate skewering of self-aggrandizing stage troupers also nods back to Nicholaw’s 2006 production, The Drowsy Chaperone, which featured one of this show’s stars, Beth Leavel, as a similarly outsize diva.

The legitimately funny book is co-written by Bob Martin, who won a Tony Award (as did Leavel) for his work in the same capacity on The Drowsy Chaperone; and Chad Beguelin, who penned Disney’s Aladdin, another Nicholaw musical. The two-pronged score, which has distinct styles for the Hoosier teens and the Manhattanite interlopers, is by composer Matthew Sklar, with clever lyrics by Beguelin; the two last teamed on yet another Nicholaw show, Elf. 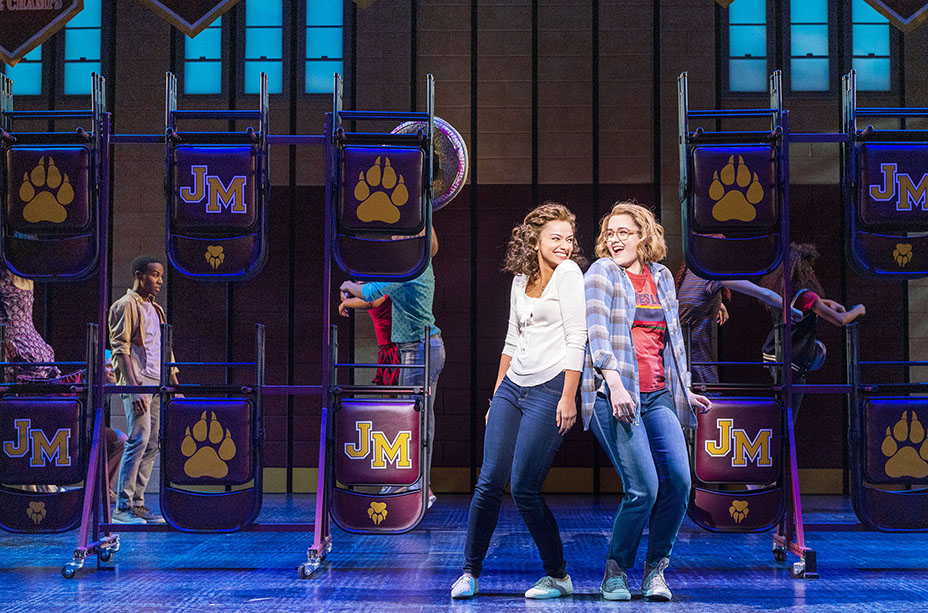 Any musical that makes it to Broadway these days without a familiar movie source or a popular jukebox score is an achievement, so this original story is a rainbow unicorn that wins points right there. Although The Prom will not go down as a classic, it’s an enjoyable, old-fashioned entertainment that provides a tonic for these bellicose times. It taps into the acrimonious national divide between Red and Blue states with a winking wit that lets neither side off the hook for rigid preconceptions. And it points toward a generational shift in LGBTQ acceptance, providing upbeat acknowledgment of the capacity for open-mindedness among today’s youth even in churchy communities. (There are plot similarities with the current London hit Everybody’s Talking About Jamie.)

At the show’s center is Emma (Caitlin Kinnunen), who was kicked out by her parents when she came out at 16 and now has caused an uproar by wanting to take her girlfriend Alyssa (Isabella McCalla) to the prom, where the latter nervously contemplates emerging from the closet.

Emma is no activist out to make waves; she’s simply a young woman who knows her own heart and no longer wants to hide. Shy and sweet-natured, she’s uncomfortable drawing attention to herself. (The hair, makeup and costume team seem to have styled her like Barb from Stranger Things.) But with the support of progressive school principal Mr. Hawkins (Michael Potts), she’s prepared to stand up to the PTA, led with self-righteous conviction and encroaching fear by local realtor Mrs. Greene (Courtenay Collins), whose dog in the fight will be revealed later in the action.

Meanwhile in New York, slightly fading Broadway leading lady Dee Dee Allen (Leavel) and her “gay as a bucket of wigs” co-star Barry Glickman (Brooks Ashmanskas) have just opened to withering reviews in an Eleanor Roosevelt bio-musical that closes the same night. Their publicist, Sheldon Saperstein (Josh Lamon), says the problem is that they’re too self-absorbed to be likeable onstage. What they need is an image makeover, and what better way to achieve that transformation than by championing a worthy political cause that requires the least amount of effort?

Armed with a deluded belief in the power of celebrity to change lives, and smug in their blinkered view of all Midwesterners as Bible-thumping cretins, they zero in on the infringement of Emma’s rights as the perfect PR opportunity. They band together with Trent Oliver (Christopher Sieber), a once-promising Juilliard graduate now waiting tables and remembered mostly for a ’90s sitcom; and perennial chorus member Angie (Angie Schworer), still waiting to play Roxie Hart after 20 years in the Chicago ensemble. Hitching a ride on a non-Equity Godspell tour bus (cue gloriously hideous costumes), they head for Edgewater, Indiana, to spread the word of compassion. And better fashion. 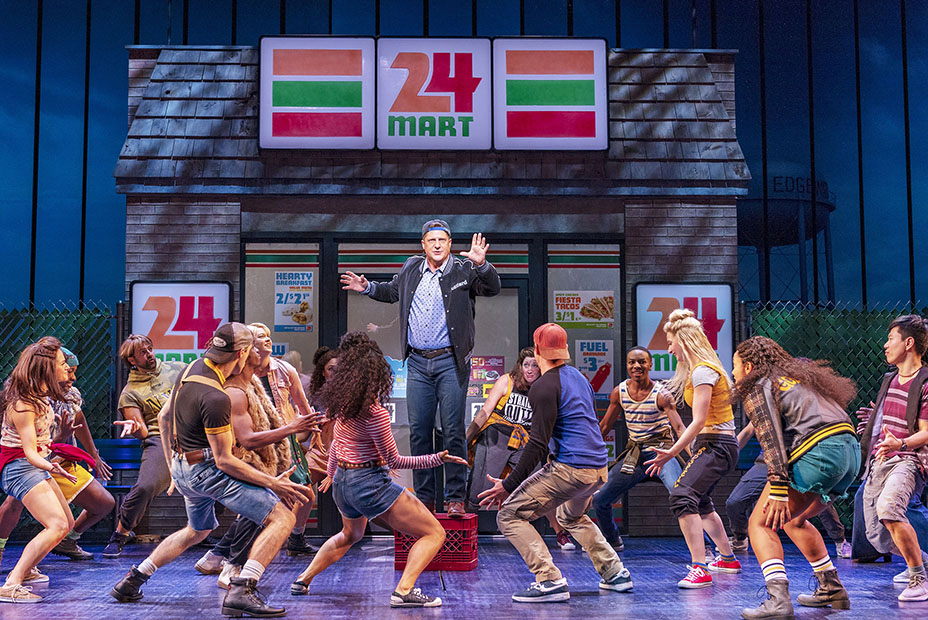 While all that might sound like a convoluted setup, Martin and Beguelin keep the jokes firing through a zippy, frequently hilarious first act that mines comic gold in particular out of the hermetic bubble inhabited by showbiz folk. That thread reaches its apotheosis when the New Yorkers descend on Edgewater in the middle of a PTA negotiation that’s actually going Emma’s way. They inadvertently set back her cause with an outrageously tone-deaf intervention song called “It’s Not About Me,” led by the priceless Leavel, who pulls out all the stops to show egomaniacal Dee Dee’s faux humility.

The self-adulation of the two-time Tony winner (she carries the awards in her handbag to impress when required) is only fueled by the discovery that Mr. Hawkins is a major fan. “Straight people like Broadway, too,” he assures the skeptical star. Potts sings “We Look to You,” a warm hymn to the magical escape of the theater that also sets up a tentative romance between them.

Playing Dee Dee as Patti LuPone-meets-Judy Garland, Leavel’s timing is impeccable. She’s a scream when Dee Dee’s eyes are opened to her pathological inability to put anyone’s interests ahead of her own, pleading with Mr. Hawkins to save her. “I have to be deprogrammed,” she implores him. “I have to unlearn things like shoving and taking, and learn things like smiling and tipping.”

The pretty love songs of Emma and Alyssa, “Dance With You” and “You Happened,” as well as Emma’s intimately revealing solos, “Just Breathe” and “Unruly Heart,” seem almost to belong to a different, more introspective musical.

But tonal whiplash is amusingly built into the material as Emma’s prom disappointments get repeatedly steamrolled by the out-of-towners, whose psychological preparation to deal with real-life issues comes mostly from shows in which they have performed. The funniest of their clumsy attempts to spread a do-gooder message is “The Acceptance Song,” a painfully earnest “We Are the World”-type anthem performed to disastrous response during the halftime show at a monster truck rally. Sieber is a hoot bringing clueless conviction to cringeworthy lyrics like, “Here’s what I learned at Juilliard / Bigotry’s not big of me / And it’s not big of you.” 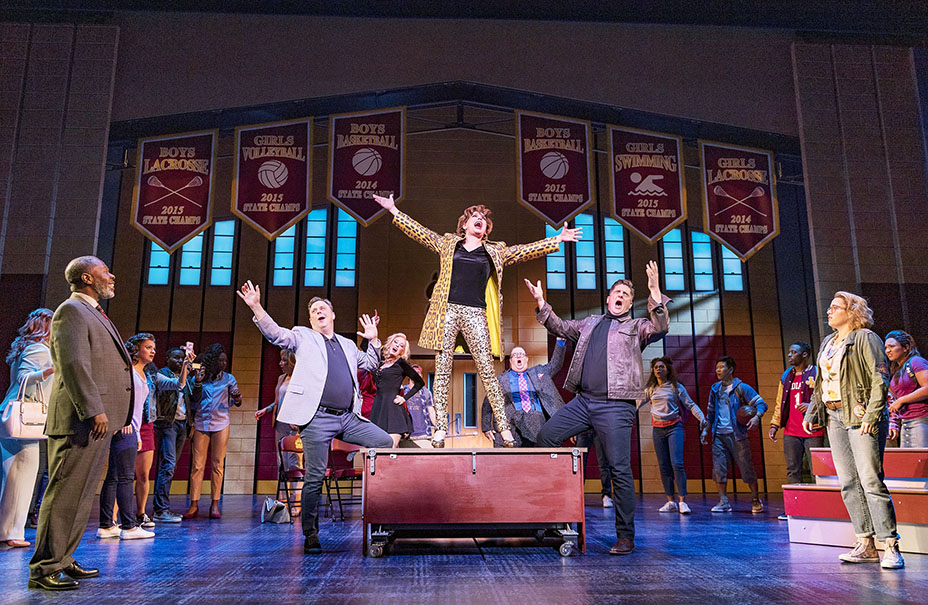 It’s to the credit of Kinnunen, in a quiet heart-melter of a performance that never pushes too hard, that Emma remains the soul of the show despite all the shameless scene-stealers grabbing for attention. She’s lovely as she gains in confidence, discovering that the blundering intruders just might have something to teach her, and vice versa. This applies to “Zazz,” a cute pep talk of Bob Fosse wisdom, imparted by Angie with gravity-defying leg extensions for emphasis; and in the preamble to “Barry is Going to Prom,” in which the parallel teenage outsider experiences of Emma and Barry hand him the opportunity for a do-over.

Ashmanskas is at his exuberant best in that number, but his performance throughout is a joy, full of inspired bits of physical business to suggest that Barry’s entire adult life is a one-man Pride parade, deflecting any momentary self-doubt with sardonic humor and a flamboyant gesticular flourish. One of Broadway’s comedic treasures, Ashmanskas has made a specialty out of playing exaggerated gay stereotypes that fly in the face of PC restraint, making Charles Nelson Reilly and Paul Lynde look butch. But what’s great about his work here is that Barry goes so far over the top he comes out the other side as a flesh-and-blood, deeply human individual. With empathy.

Even if the material is contrived and the songs are catchy without being exactly memorable, the terrific cast sells it all with irresistible verve, making this a small-scale crowd-pleaser that sends you out with a smile. And Nicholaw’s handle on musical comedy is unimpeachable, taking as much care with the little character details and peripheral action as he does with the splashy musical statements. Without marquee stars, hit songs or a proven property, The Prom may not be the easiest sell on brand-driven Broadway, but this modest production delivers big time on sweetness and laughs.