With the Sunday premiere of HBO’s Game of Thrones‘ eighth and final season just days away, die-hard fans of House Stark may be brushing up on the nobles’ ancestry, blazon and motto. Now, they have their own eponymous cocktails to enjoy, thanks to Hollywood bars going all out to capitalize on the theme.

Thanks to Paige Nelson, a bartender at Ever Bar in the Kimpton Everly Hotel in Hollywood, followers of the Kings in the North can imbibe a strong, creamy drink made with Blackened Whiskey, honey, Fernet and whipping cream that, for $20, allows them “to mimic the feeling of breathing in cold air,” she said. The snowy landscape of Winterfell is re-created in a julep glass with powdered sugar, and a smattering of dehydrated pink rose petals are scattered like weirwood leaves in a winter gale. “Online quizzes have always told me I’m a Stark so I have to support my people,” Nelson told The Hollywood Reporter. “House Stark stays honorable no matter what. And who can resist Sansa, Arya and Jon leading that pack?” 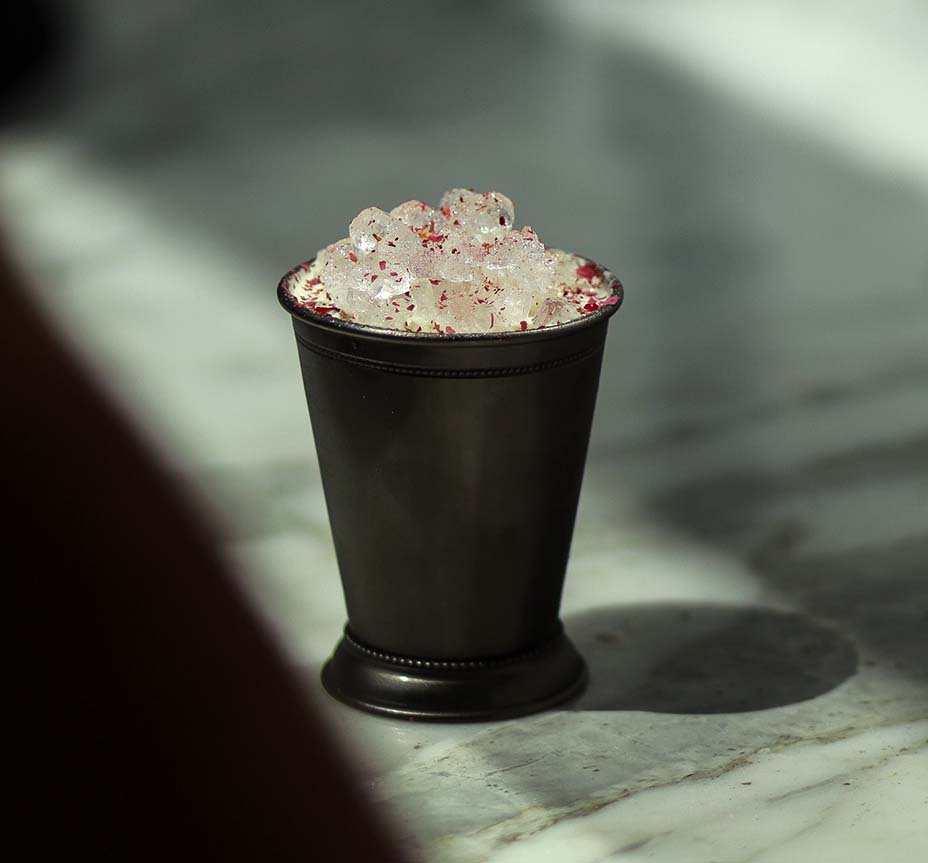 Game of Thrones has inspired several other L.A. bartenders. In addition to the Emmy-winning TV series, they also glean plenty of material from the 4,197 pages in the five books published thus far in George R.R. Martin’s planned septology. Fortified by a deep knowledge of Westeros through multiple readings of the novels and viewing of each TV episode, Dave Wieland, bar manager at Scum and Villainy Cantina in Hollywood, concocted new cocktails such as Dracarys ($14; Herradura tequila layered with St. Germaine elderflower liqueur, champagne, orange juice and grenadine to conjure flames) and Red Wedding ($15; Irish cream and Kahlua blended with Godiva white chocolate liqueur and strawberry puree). There’s also an $8 nonalcoholic option called The Unsullied, a sprightly mix of ginger beer, cranberry and lemon juice, soda and bitters, sold with a tagline that reads, “Something’s missing from this cocktail.”

J.C. Reifenberg, co-owner of Scum and Villainy Cantina and a film editor who has worked with director Kevin Smith, took on the tasks of writing the pun-steeped descriptions for each specialty drink as well as revamping the menu with Chicken Little Fingers and Khal Drogo Queso. He even spent eight hours customizing the menus by dyeing large sheets of white paper in coffee, which he then baked and crumpled to resemble disintegrating parchment paper. 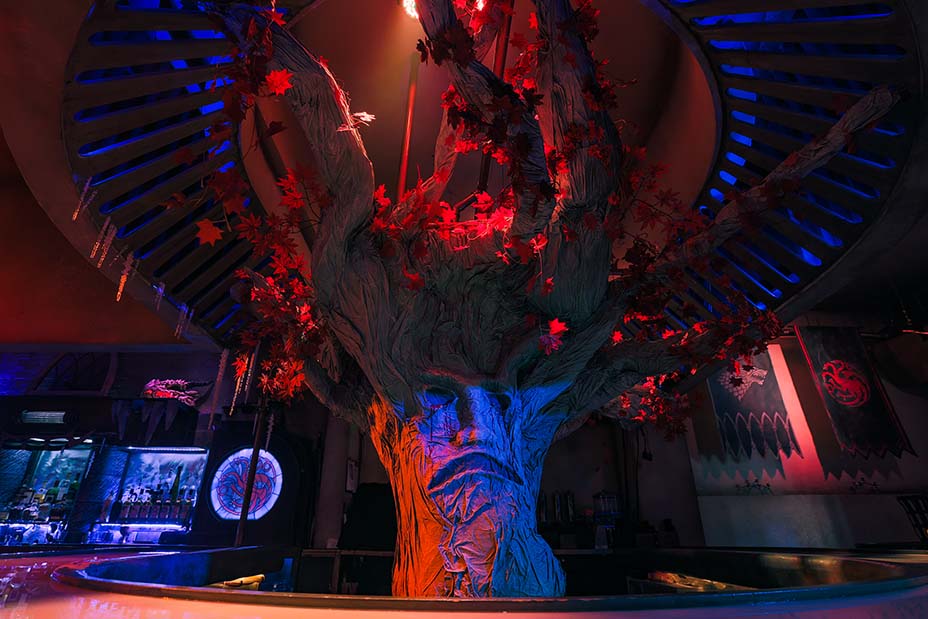 These are the tiny touches that enhance the authentic scenery created by event design company Damn Good Shindig at Scum and Villainy. Besides erecting an iron throne in the venue’s front patio, the L.A.-based company also built a weirwood tree in the middle of the horseshoe-shaped bar and decorated the booths under arched entryways to mimic Winterfell crypts.

“Game of Thrones was able to bridge the gap between nerd culture and pop culture,” Reifenberg told THR, describing the show as “the nerdy version of Cheers.” The bar encourages elaborate costume play (cosplay) as well as simple get-ups, such as the popular Target tank top printed with the phrase “Mother of Dragons.” He continued: “We work very hard to provide a judgment-free zone for all levels of passion and fandom. For the people who are able to break out their Jon Snow or Daenerys Targaryen cosplay, it may be the last time before it becomes less relevant.”

The start of Game of Thrones‘ final season has been anticipated for months in the beverage community. In February, British company Diageo announced an HBO-collab limited-edition, eight-piece collection of single malt whiskeys named after the great houses in Westeros as well as the Night’s Watch. Four months earlier, the beverage conglomerate released White Walker by Johnnie Walker (stocked at Beverage & More stores in Los Angeles), a limited-edition blend of Scotch whiskey evoking notes of caramelized sugar, vanilla and red berries. On the bluish-white bottle, the brand’s gentlemanly mascot pairs his top hat with the armor worn by the Night King. Recommended to be served ice cold, the bottle was etched with thermochromic ink to deliver a surprise message when frozen. 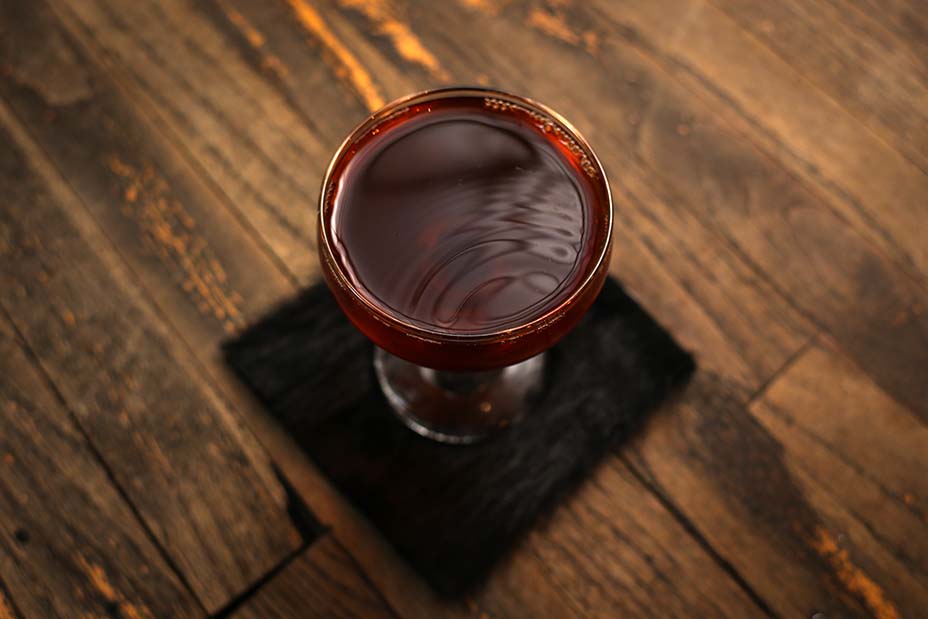 Big Bar in Los Feliz uses White Walker by Johnnie Walker as a foundation for its cocktail “The White Winds Blow by the Night King.” On Monday, April 15, the Los Feliz bar is unveiling a menu filled with Thrones-style tipples, all priced at $16 and offered through the duration of the show’s season. Take the Black mixes Hennessy Black cognac and Whipsaw rye whiskey with Mr. Black coffee liqueur, Averna herbal liqueur, Miracle Mile walnut bitters and Angostura bitters. Served in a short-stemmed coupe with a cherry, the all-black libation is “just the kind of boozy aromatic cocktail you’d want if you were serving in the cold and brutal North,” said Cari Hah, Big Bar’s bar manager.

But there are limits to how far a fan will go. April 30 is the last day that visitors can immerse themselves in Westeros at Scum and Villainy, even though the series will have broadcast only half of the final season’s six episodes by then. That’s because Scum and Villainy, whose own name is cribbed from a line uttered by Ben Obi-Wan Kenobi in Star Wars: Episode IV — A New Hope, will need to prepare for Star Wars-related celebrations on May 4, when fans will flock there to regale each other with the expression of “May the Fourth be with you.”

“We cannot have the bar looking like Game of Thrones [on May 4],” Reifenberg said. Otherwise, he said, “There will be riots in the streets of Hollywood.”