Ayear ago, in early 2016, writer and composer Justin Hurwitz made his first tentative trek down the red carpet in a $300 tux from Men’s Wearhouse at the Grammy Awards, where he was nominated for best score soundtrack for visual media for Whiplash. Since then, Hurwitz, 32, has donned Burberry on the Golden Globes carpet and Zegna Couture at the BAFTAs. Now, as he preps for this year’s Academy Awards with three nominations for La La Land, the composer, who already has won two Globes — for best song (“City of Stars”) and best original score — and a BAFTA for original music, has enlisted the services of Hollywood executive style consultant Andrew Weitz of The Weitz Effect.

“It’s been an exciting few months and also a little exhausting dressing up so often, which I’m not used to doing,” says Hurwitz, who has sported a daily uniform of a gray T-shirt, jeans and Adidas Gazelles “for probably the last eight years or so” (although in the status-casual lexicon of Hollywood, the T-shirt is James Perse and the jeans A.P.C. raw indigo denim). He adds, amiably, “I’ve been doing my best to try to look decent at events.” 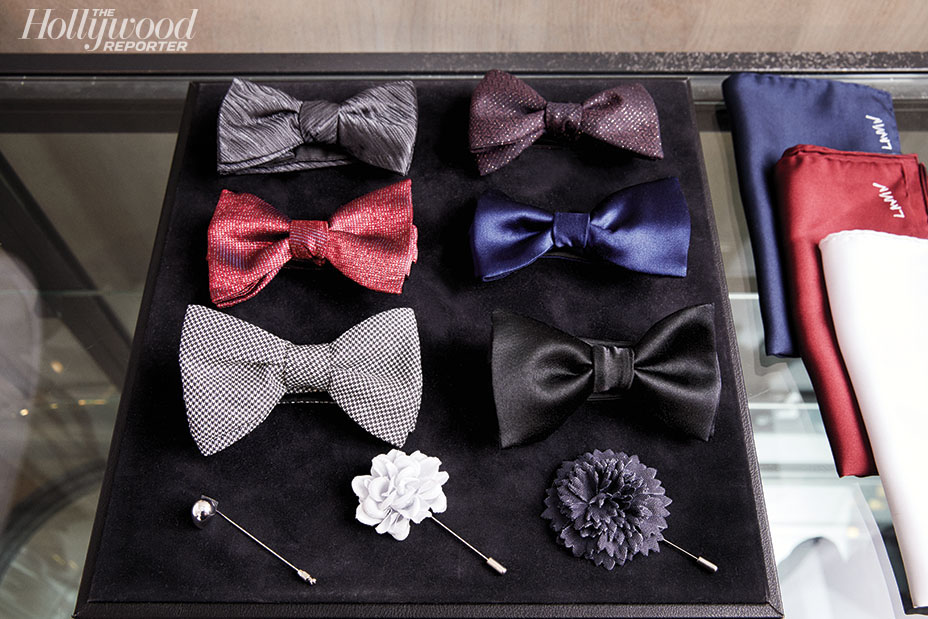 Weitz, a former WME agent turned fashion insider (and brother to agency partner Richard Weitz) was recommended to Hurwitz in January by his WME rep Amos Newman. Weitz’s job, he says, is to bring extra polish to his new client’s look for “the mother of all awards shows.”

The stylist and Hurwitz started off in sync. “One of my colleagues and I were sitting around on set a couple of weeks ago just Googling tuxes that people have worn to the Oscars and other award shows,” says Hurwitz, whose current job is writer-producer on Larry David’s new Curb Your Enthusiasm for HBO. During their web search, they “came across Pharrell wearing Lanvin. It fit him so well, and he’s a slight guy, so I emailed Andrew and said, ‘How about Lanvin?’ He said, ‘That’s exactly who I was thinking of for you.’ “ 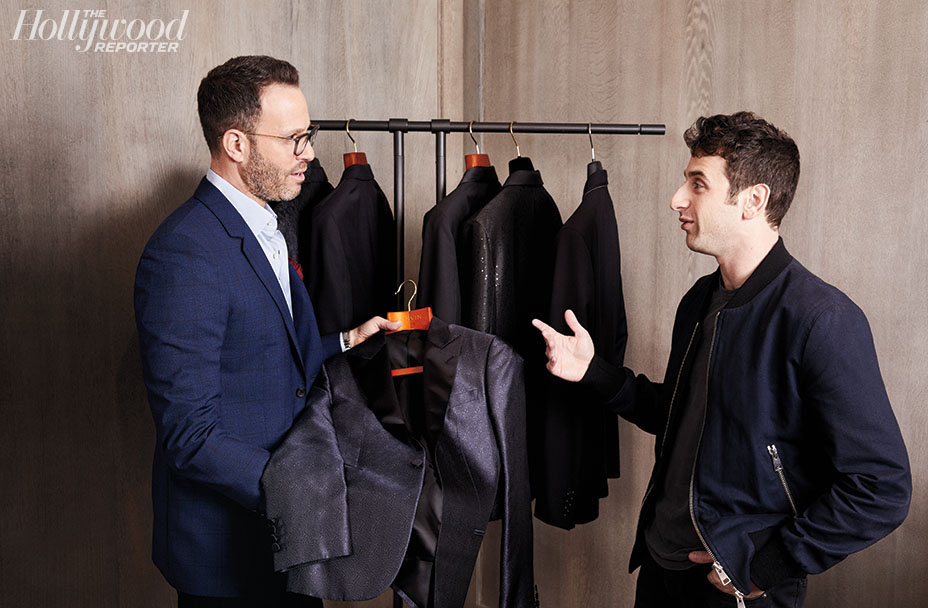 Weeks later at Beverly Hills’ Lanvin boutique on Rodeo Drive, Weitz mentions that Hurwitz has been a quick study in the finer points of formalwear. “If you want to put some comedy in your piece, Google me at the Grammys and look at how my tie was sitting,” says the composer. “It was the most off-kilter bow tie that’s ever been photographed.” Weitz does have a few constructive criticisms of that off-the-rack suit: “To start with, the jacket is maybe two sizes two big. You can tell because of the excess fabric in the sleeves. And it’s way off of his shoulder, not where his shoulder line is,” says the stylist, who adds that the trousers also are too big, a common issue for men. “You can tell by the bunching of the fabric below, the excess on his leg. They are a full one or two sizes too big.” 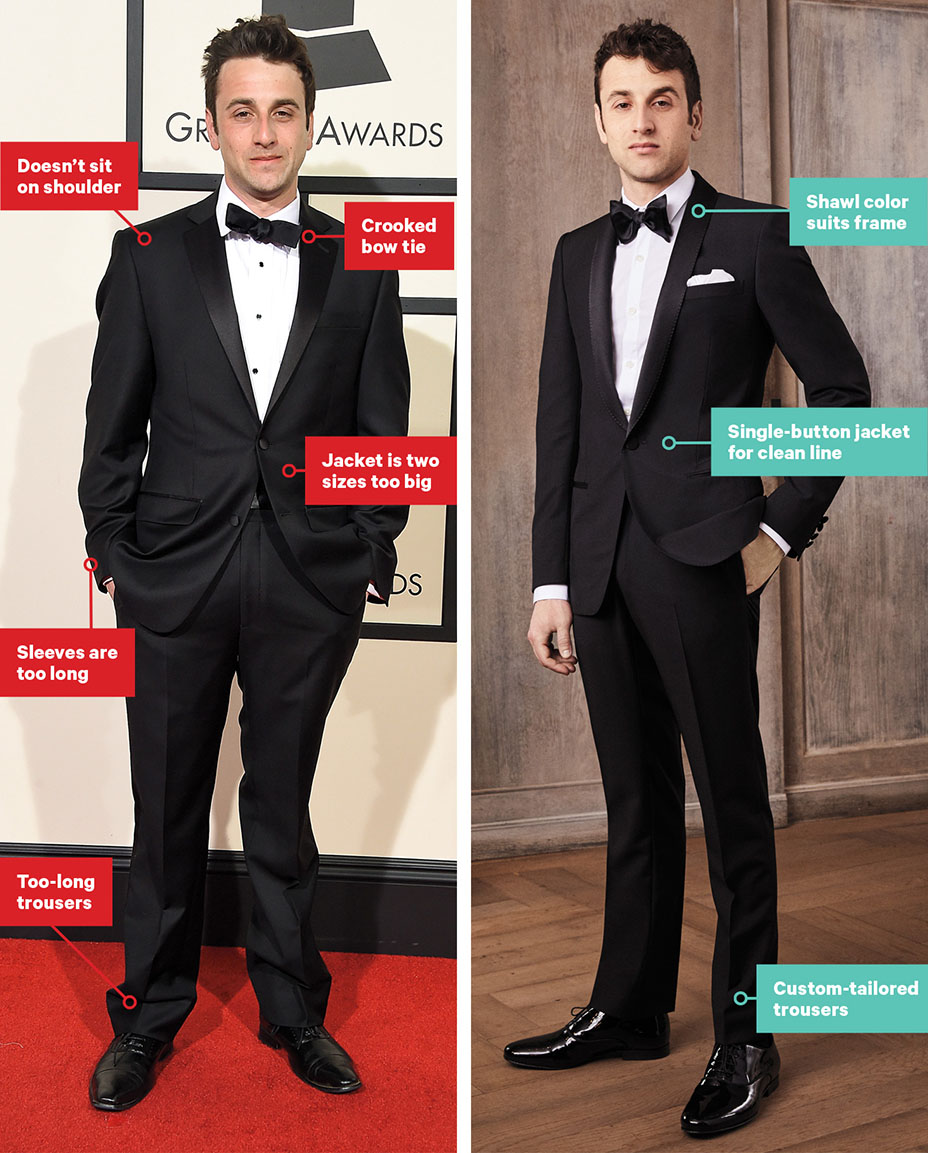 Weitz mentions that men often will pick a tuxedo with a notch lapel (“One level above a business suit,” he says), as Hurwitz did last year, but “if you are going to do a tuxedo, it should be a peak lapel or a shawl collar. Those are timeless,” he says. “We tried on a couple of tuxedos and learned that the peak lapels were slightly too big on Justin. The shawl collar was slim, which was good on his frame.” Hurwitz concurs: “The shawl collar looked classic but a little different,” he says. “Not that edgy but different for me.” Weitz adds that a jacket shoulder shouldn’t be “too padded. I don’t like jackets that make people look too broad nowadays. But you also shouldn’t have an unconstructed shoulder because it flattens you out too much.” He advises that pants always be custom tailored to eliminate any excess drooping and pooling around the ankles.

Before There Were Stylists: Barbra Streisand, Jodie Foster and More Defend Their Oscar Gowns

For bow ties, Weitz says a larger butterfly style, like the ones designer Tom Ford has successfully revived, works well on larger-framed guys. For slimmer men, a smaller bow is better, as long as it doesn’t verge into Pee-wee Herman territory. “I always bring three different versions and sizes of bow ties because you never know what is going to be best,” says Weitz.

The final results are worth it. “How often are you nominated for three Oscars in a year? This could be a once-in-a-career moment. You’re going to look back in photos and make sure you look timeless.” 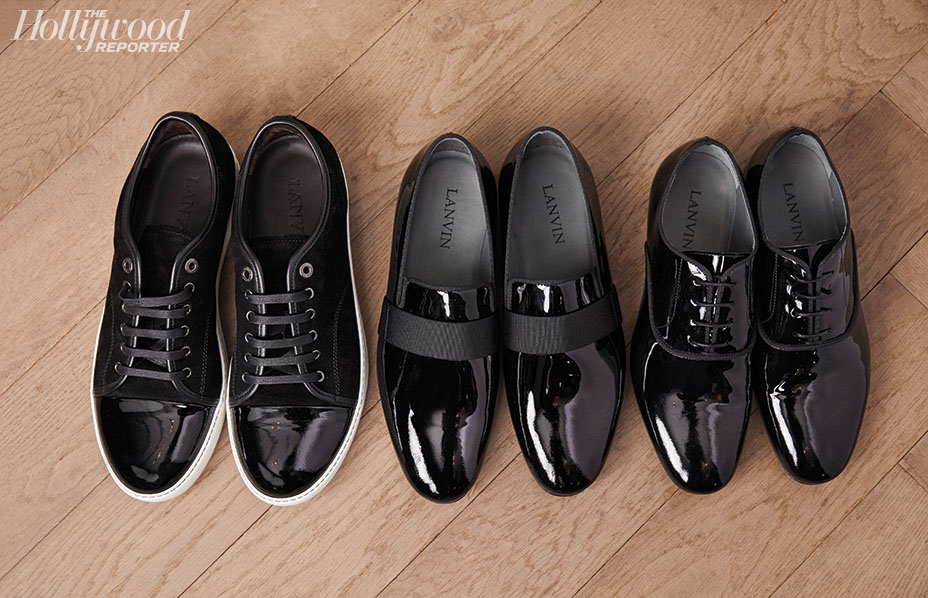 A GUY’S GUIDE: HOW TO STAND ON THE RED CARPET

1. Avoid collar crimes “When going on the carpet, check that your collar is tucked underneath the jacket and that the jacket is sitting on your shoulder properly,” Weitz says.

3. Unclasp the hands The often-photographed hands-clasped-in-front pose for men is to be avoided, says Weitz. “You’re already rounding your shoulders so you’re not standing full in your power.”

4. Hands down If facing the cameras head on, Weitz says, let your hands hang clearly down by your sides.

5. Pocket pose For the most flattering shot, Weitz advises angling yourself away from the cameras with one hand in your pocket — make sure your jacket nicely covers it.