Stage acting doesn’t get any better than Glenda Jackson’s performance as the autocratic nonagenarian in Edward Albee’s Three Tall Women, modeled on the adoptive mother with whom the playwright had a famously thorny relationship. On Broadway for the first time in 30 years (23 of which she spent as a member of British Parliament), the two-time Oscar winner shows no trace of rustiness in a characterization of such diamond-hard ferocity you dare not take your eyes off her. It’s an almost ridiculous luxury that in Joe Mantello’s crystalline production of this brittle but moving play about death and self-knowledge, two such accomplished actors as Laurie Metcalf and Alison Pill become supplementary dividends.

With its taut structure, psychological acuity, acid-dipped humor and fragmented approach toward anatomizing a single life, not to mention its transparency as a work of an intensely personal nature, Three Tall Women did much to restore Albee’s reputation. After the early plays that had established him as a bracingly original voice in American drama — among them The Zoo Story, Who’s Afraid of Virginia Woolf? and A Delicate Balance — the playwright had fallen out of favor through the 1980s, producing work that remained frustratingly cryptic, arid and distancing. Sorting through unresolved feelings toward his adoptive mother in a play he once described as “a kind of exorcism,” Albee’s writing here feels revitalized, which makes this 1994 Pulitzer-winning drama a fine choice for the first Broadway production of his work since his death in 2016.

Jackson, after standing down as an MP in 2015, returned to the stage the following year not with caution but with fearlessness, tackling the title role to great acclaim in a gender-blind production of King Lear at London’s Old Vic. Her character here, identified only by the letter ‘A’ in Albee’s script, shares many traits with Shakespeare’s enfeebled monarch. Her health is failing and her memory has grown unreliable, adding to the physical indignities of old age. But with barking imperiousness and a fabulous sneer, she clings to her authority, to the importance of appearances, and to the armor of her wealth and class, querulously convinced that everyone is conspiring to rob her blind. 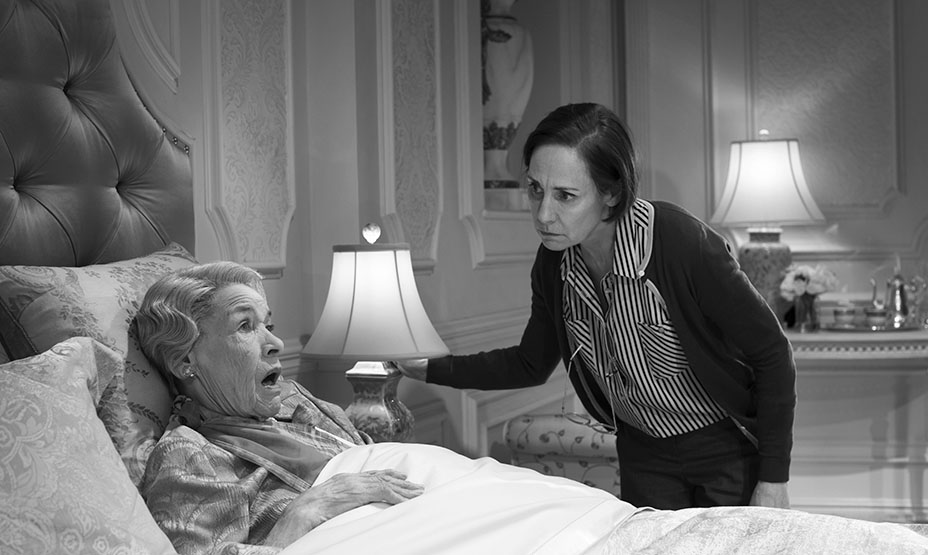 Miriam Buether’s single set, which undergoes a visually arresting transformation in the second act, is a stiflingly tasteful bedroom with cream-colored walls and muted mint green accents — there’s a fitting touch of the mausoleum in the sterile environment. Ruling this domain from an armchair by her bed sits A — her silver hair immaculately coiffed, her makeup flawless and her broken arm in a fabric sling over her elegant mauve robe, accessorized with the requisite pearls. One look at her says this is a woman determined not to let go of her pride. We learn that she refuses to have her arm amputated as her doctor has advised, and will not wear diapers despite frequent panicked shuffles to the bathroom and the occasional accident.

The two other tall women in the room, also unnamed, are B (Metcalf), A’s 52-year-old professional home caretaker, and C (Pill), a 26-year-old associate from her lawyer’s office, visiting to sort out some financial irregularities in her paperwork. The dynamic among them is swiftly established as A insists with bristling indignation that she’s 91 while C, with all the smug certainty of youth, points out that according to documents, she’s actually 92. B has clearly figured out the best way to get along is to humor the old woman and let her questionable assertions and blathering repetitions slide, but C is a stickler for details, annoyingly inclined to disagree.

Despite such disputes, A obviously enjoys holding court, even if her reminiscences are intended more as a battle to control her own deteriorating mind than to entertain her companions. At times she curtly dismisses C for being unable to follow her nonlinear conversation and wandering references, but just as often A loses the thread and admits defeat, dissolving into infantile tears or sputtering rage. B serves as a mediator, with Metcalf deftly channeling empathy into her deadpan delivery. In some of the more amusing exchanges, the two older women gang up on C, savoring every chance to remind her that old age and infirmity eventually await her, too.

“It’s downhill from 16 on! For all of us!” B informs her with glee as C mutters banalities about how awful physical decline must be. “Don’t be so soft. I’d like to see children learn it — have a 6-year-old say, ‘I’m dying’ and know what it means.”

Part of B’s job, along with the practical nursing duties, is simply to help A keep the cogs turning, to make the appropriate affirmative noises or jump in with gentle interjections to reassure her when she hits a patch of uncertainty. Jackson’s voice is a full orchestra with rich bass notes and a glorious brass section as she lingers momentarily over an unpleasant memory, revises another until she irons out the kinks or cackles with delight over some incident from the past in which she invariably recalls being one step ahead of everyone else. Her hands are equally expressive.

Many of these windy recollections, of course, B has heard before. But it’s all new to C, who alternates between feigned attention, offense at the casual racist slurs littered through A’s chatter and, every now and then, genuine interest when she reveals something juicy. “I didn’t like sex much, but I had an affair,” admits A, talking up her skills as a horsewoman before acknowledging her tryst with a groom in the stables. The most salacious stuff, however, pertains to her penguin-like husband, a short, rich man with a glass eye as a result of a golfing mishap. A makes no apologies for her calculating approach to the marriage, and the transactional nature of sex for her is outlined in an astonishing story — recounted by Jackson with delicious wit, evident distaste and just a hint of shame — in which her husband tottered into her dressing room naked with a diamond bracelet dangling from his erection.

Mantello stages the play without intermission, with just a pause between acts as the rear wall becomes a mirror, showing A lying unconscious in bed after a stroke. All three women then return to the stage playing A at three different points in her life, outfitted by costumer Ann Roth in stylish dresses in various shades of purple, suggesting the decades that correspond to their respective ages without getting too specific about it. This threefold separation is a somewhat blunt device for a writer who traded so heavily in obliquities, but it’s effective.

Having fused into a single entity, the women continually juggle pronouns, shifting from “I” or “you” to “we” or “us” as they connect the threads and reflect on the experiences that transformed naive, optimistic C into jaded B, and B into sour, isolated A. The latter acquires complete lucidity in this alternate version, as she engages with her younger selves while glancing across at her dying body in the bed, without a trace of self-pity. There’s beauty and sadness in their respective thoughts on when they were at their happiest, reflected in the supple changes of Paul Gallo’s lighting. 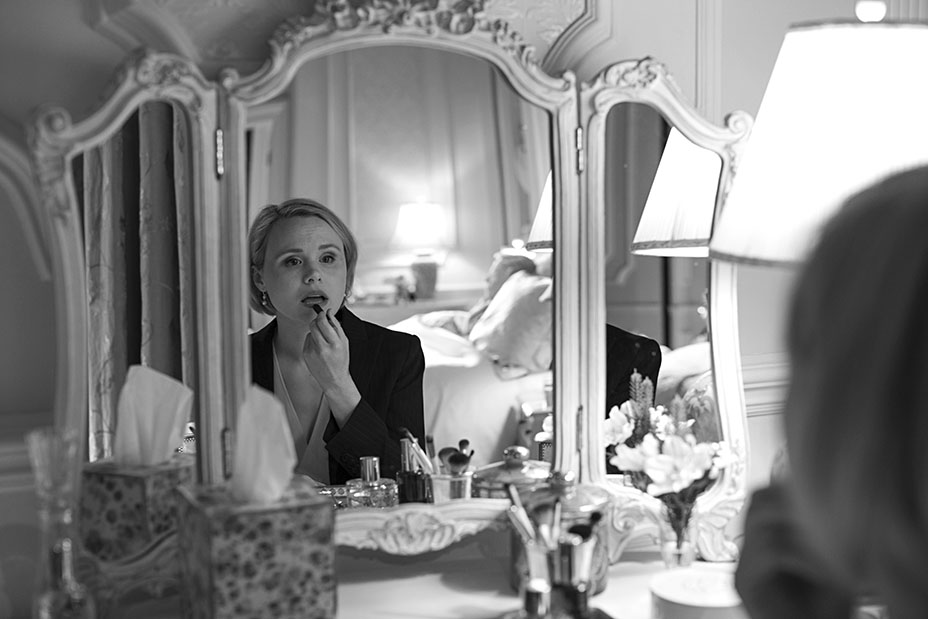 A fourth presence appears, silent but significant, that of the son (Joseph Medeiros, uncredited) referred to only as “he” or “him.” Like Albee himself, the son left home at a young age due to his mother’s refusal to accept his homosexuality, and that fissure was never fully mended. “He loves his boys, those boys he has,” says A in one of her more maudlin moments of distraction, anxiously wondering if he’ll visit while always maintaining that he never loved her. Although she continues questioning his motives when her son steps into the mirror to bring flowers to her bedside, that emotional image and the contrasting reactions of the three women to his unexpected arrival are among the most tender and affecting moments of the play. They convey, if not fondness between mother and son, then at least a begrudging mutual respect that seems to encompass the playwright’s own complicated feelings toward this most difficult of parents — as well as thoughts on his own mortality.

Pill is slightly shaky in the least gratifying role, constrained by her character’s relative lack of experience and wisdom. But she has lovely moments late in the play, crushed by the possibility that her greatest joys might already be behind her and aghast at what she’s going to become. While Metcalf is always a fascinating performer to watch, she’s at her best here in Act I, when her lack of vanity and her straight-faced humor are an ideal match for the stoical caregiver. In Act II, she seems too essentially down to earth, too unfussy and open-minded to play the kind of rigid, patrician figure that would continue to harden into calcified old age. (The role was originated off-Broadway by the eternally majestic Marian Seldes.)

Still, it all makes sense if you accept that someone on the brink of death — reordering the memories of her delusional mind to make some kind of peace with a life about to be extinguished — might superimpose her younger selves onto whatever body happens to be close by. When the three women reach out and join hands as A welcomes the end with a closing line of exquisite surrender, they do indeed become one. And if Jackson dominates this production, with a performance by turns broken and steely, lost and illuminated by bitter knowledge, no one can say her formidable power is to the detriment of Albee’s play.