“There’s a great devil in the universe, and we call it Time,” says Kay Conway, the aspiring novelist whose precognitive gifts pierce her psyche like knives, foreshadowing the undoing of her happy family over the 18-year span of Time and the Conways. This and other works by J.B. Priestley were heavily influenced by the theories of British philosopher J.W. Dunne, identifying time not as a linear succession of frozen instants but as a parallel dimension fusing past, present and future, in which the highs and lows of a life are secondary to the entirety of experience. Only one character in this lumpy but eventually intriguing drama, Kay’s contentedly dull, underachieving brother Alan, is able to grasp and take comfort from that altered consciousness.

Rebecca Taichman, who won a Tony last season for directing Indecent, returns to a problematic work she tackled previously at San Diego’s Old Globe, bringing the play to Broadway for the first time since its 1938 premiere, a year after its London debut. The plush Roundabout revival demands patience, withholding payoff for its haunting final moments. And it is significant that the production’s most memorable achievement is a mesmerizing scene transition, time-jumping from 1919 to the same room in 1937. In that extended transformation, Taichman, set designer Neil Patel and lighting magician Christopher Akerlind tap into the playwright’s metaphysical concept with lingering imagery far more evocative than Priestley’s self-conscious writing.

Its inorganic mysticism aside, the play functions more readily as a naturalistic English drawing-room drama of the period, examining the shifting tides of wealth and class, the cost of bourgeois complacency, the failure of political idealism and the loss of prosperity, position and security for one well-off Yorkshire family between the wars. Those themes provide a kinship to Chekhov, particularly The Cherry Orchard and Three Sisters, though this is a vastly inferior work to those plays, or to Priestley’s better-known An Inspector Calls. However, Roundabout at least deserves credit for casting its net beyond the established classics. 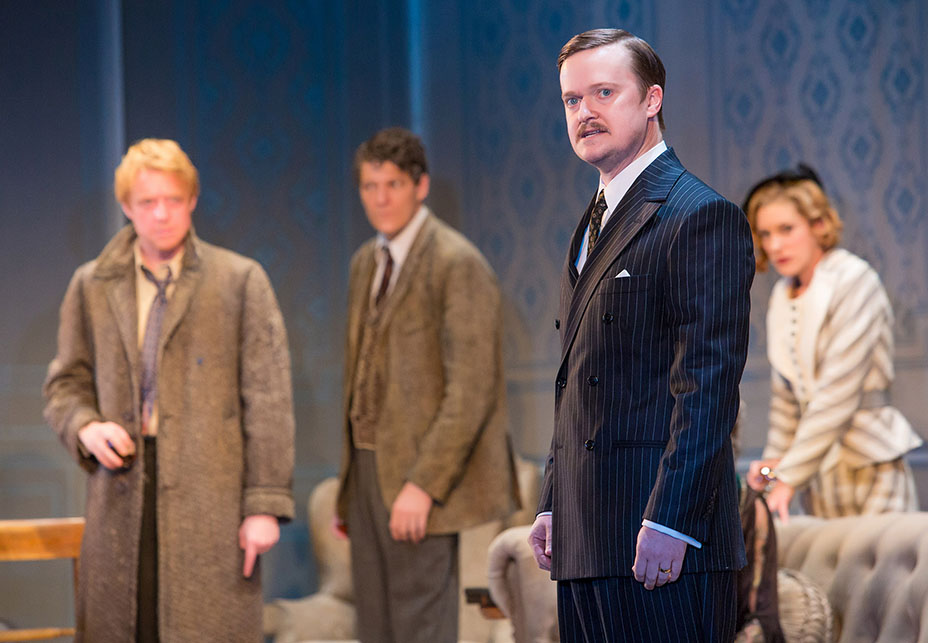 In the plodding first act, spirited widow Mrs. Conway (Elizabeth McGovern) gathers her six grown children for a jolly evening of dress-up skits and charades to celebrate the 21st birthday of Kay (Charlotte Parry). While Kay is the serious one, given to brooding silences, her sister Hazel (Anna Camp) is a frivolous beauty who attracted military brass like a magnet during the war. Madge (Brooke Bloom) is a budding Socialist schoolteacher with a brittle edge, and the youngest sister, Carol (Anna Baryshnikov), is a giddy free spirit, the essence of purity and kindness.

The two brothers are polar opposites: The aforementioned Alan (Gabriel Ebert) “never looked right in the Army,” according to their mother, failing to distinguish himself and then segueing without complaint after the Great War into a dreary clerking position at the local Town Hall. Robin (Matthew James Thomas) surprises them all when he arrives late, looking dashing in his Royal Air Force uniform. Cocky and full of grand but formless plans to conquer civilian life doing something “in the car or motorbike line,” he’s clearly Mrs. Conway’s favorite. And Hazel’s snobbish friend Joan (Cara Ricketts) swoons for him.

The other outsiders are Gerald Thornton (Alfredo Narciso), a longtime friend of the Conways, now the family solicitor. He brings along a client new to the area, Ernest Beevers (Steven Boyer), an upstart with a good head for business, whose unstylish suit and working-class accent place him beneath the world of his fabulously attired hosts. That doesn’t stop him eyeing the prize of Hazel, who cruelly mocks his obvious designs on her, referring to him barely out of earshot as “that dreadful little creature.”

Taichman stages the three-act play with just one intermission, leaping directly from the 1919 opener to 1937. Patel’s single-room set is all pristine elegance, beige on beige with gold trim. In a stunning visual, the entire room recedes slowly to the rear of the stage, its perspective shrinking as a transparent scrim version of the same room descends from above, accompanied by the pensive piano and strings of Dustin O’Halloran’s “An Ending, A Beginning.” Just one character from the first act remains pinned to the sofa. Her face is suddenly a mask of apprehension as the Conways’ gathering place, once brimming with gaiety, conversation and life, literally becomes a ghost of its former self.

That image artfully signals the precipitous tumble in the family’s fortunes, as well as a physical absence only later explained. The play grows exponentially more interesting once we see how ill-matched marriages have soured; hopes and dreams have been shattered or just quietly crumbled away; obstinate impracticality has started a course toward financial ruin; the golden boy has become a worthless drunk; and the former underdog is now a moneyed bully, his scorn for the Conways fueled by their condescending attitudes toward him.

Madge serves as Priestley’s principal political mouthpiece, venting at feckless Robin for helping to break a strike by railway workers as she bemoans the lack of harmony between middle- and working-class that she so naively predicted. Another perspective on that snapshot of postwar optimism making way for disillusionment and dissipation is revealed in the final act, which returns to 1919 to show how the remainder of the evening of Kay’s 21st played out, and the seeds of misfortune were planted. 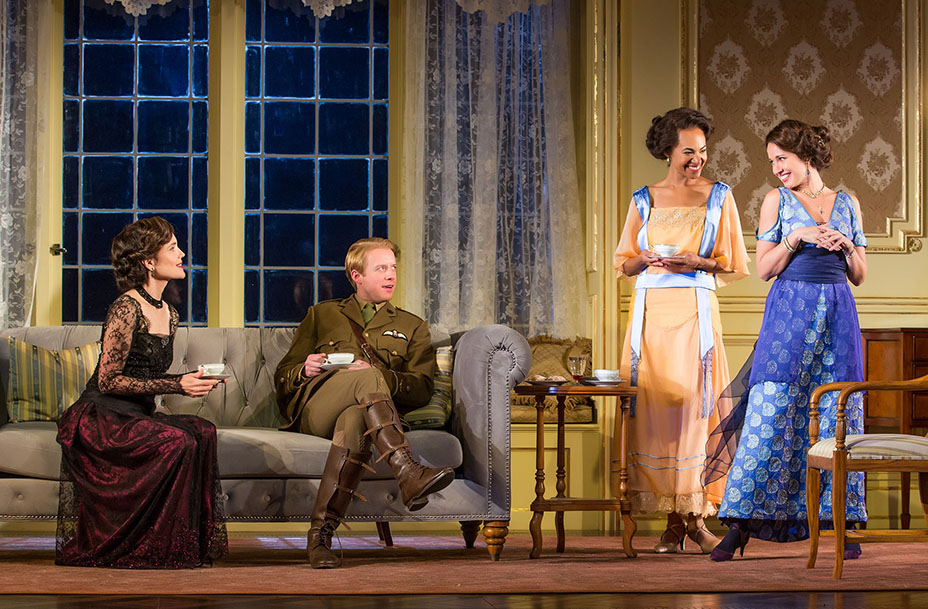 This is not the subtlest of plays, and Taichman allows half her actors to wade into over-emphatic melodrama. That’s the case with Camp, who can be such a delight in bitchy roles, but here seems too inhibited by the starchy accent to find much poignancy in her character’s unhappy outcome. Boyer, who was a crackling force of reluctant mischief and malevolence in Hand to God, makes Beevers’ ice-cold rage a vicious cartoon. Bloom can’t do much with the shrill scold Madge, a spent firebrand uncharitably described by her mother as middle-aged before her time. Thomas gives a weak performance as a weak character, and Ricketts’ Joan is a grating interloper who generates zero sympathy.

Parry has arguably the most challenging task with Kay, stepping outside the action at the end as she shudders at her visions of the family’s — and her own — bleak future. The pathos in her performance lends power to the melancholy closing moments. There are nuanced pleasures also in the work of Narciso as the levelheaded Gerald, and most of all Ebert, dressed in tails at the party, behaving and being treated like the butler, while simultaneously flinching and remaining impervious to every insensitive slight from his family. Alan is the chief vessel for Priestley’s theorizing on time, and his comparative resilience is the play’s ultimate irony. In a small but indelible role, Baryshnikov (daughter of the famed ballet star) makes an enchanting Broadway debut.

The headliner, of course, is McGovern, back on a Broadway stage for the first time in a quarter-century and playing a woman with no aristocratic title but in many ways weathering similar upheavals to her character on Downton Abbey. Mrs. Conway is basically Arkadina from The Seagull, a spotlight-stealing mother (she’s a former professional singer) who makes a big show of doting on her children while cutting them down to size with her casual dismissals. She’s perhaps the most deluded of them all, actively seeking distractions rather than facing reality. McGovern’s slightly mannered quality is a nice fit for the double-edged role, and she looks sensational in Paloma Young’s distinctive costumes. As she showed in her marvelous work on Natasha, Pierre & the Great Comet of 1812, Young is brilliant at combining period style with idiosyncratic flair (not unlike the great Sandy Powell’s work in movies), her costumes providing sharp character insights.

Time and the Conways is a funny old play, interesting more for its structural adventurousness than its thematic trenchancy. And while Taichman and her uneven cast can’t obscure the writing’s weaknesses, the production closes on a forceful note that makes it retroactively quite satisfying.