When Tina Fey and Jeff Richmond assembled the cast for Broadway’s Mean Girls musical, they set out to make “fetch” happen all over again. But to recapture the magic of Fey’s 2004 film for the stage, the married couple and creative partners knew that diversity would be paramount to success.

In fact, during the audition process — aided by famed casting house Telsey + Company — Fey says that instead of searching for look-alikes, they focused on finding performers who carried the “essence” of the beloved characters she created nearly 15 years ago for her first screenplay.

“We strived for more inclusivity, not just in the ensemble, but with the principals,” says Fey, whose show opened on Broadway in April and has netted $65 million in ticket sales. “We were very excited to find Ashley Park to play Gretchen because she’s so skilled and emotionally three-dimensional in that part. I also felt a palpable relief that we all got the added benefit of her being an Asian actor and adding diversity to our show.”

Fey, 48, and Richmond, 58, will be honored Jan. 31 at the Casting Society of America’s 34th annual Artios Awards (held at dual ceremonies in L.A. and New York), where they will receive the Marion Dougherty New York Apple Award. Ahead of the event (where Laura Dern will also be honored), the pair spoke to THR about finding the right players for Mean Girls, the possibility of a movie musical and the one stunt casting they’d allow for the show.

What was the most challenging part about casting Mean Girls the musical?

TINA FEY Trying to find people who could really do everything. Almost everybody has to be able to dance in our show, and everyone has to be able to sing. Most importantly, they have to be able to handle a joke. And in some actors, that’s the hardest thing to find because kids grow up learning to sing and dance, but it’s tough to teach someone how to be funny.

JEFF RICHMOND With Tina’s writing, you really need a quadruple threat — someone who can sing, dance, act and also land a joke. Trying to find that combination of talent with a cast that is supposed to be in high school? It’s a very tricky process.

How did the casting compare to finding actors for the film?

FEY A very similar thing happened in the casting of Mean Girls on Broadway. We got down to the wire and it was hard to decipher who would play each of the Plastics because everyone was just so talented and capable. With the movie, we weren’t sure if Amanda Seyfried was going to be Regina or if she was going to be Karen. The same thing happened with Taylor Louderman, who plays Regina, and Kate Rockwell, who plays Karen, in the musical. So, there were definitely moments of deja vu. 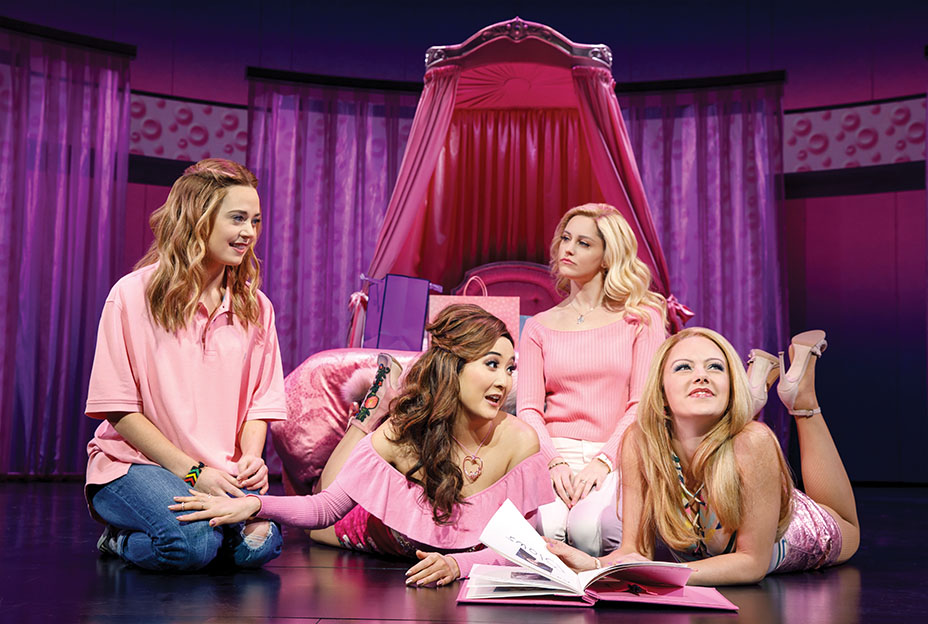 How did you balance your desire to be more inclusive with the expectations set by the cast of the original film?

FEY There is no perfect look, really. It’s about finding the spirit of the character in different actors. A good casting director can identify when a person might look completely different but embodies exactly what you’re looking for.

Now that the musical is off the ground, would you ever consider bringing back Mean Girls to the big screen?

FEY Maybe someday we’ll get lucky and make a film of the musical! I just said that now. No one is talking about it … except for me. (Laughs.) But let’s try and start momentum!

What about hiring one of the film’s stars for a limited run on Broadway?

FEY Honestly, I think most of the actors from the movie are too old to play high school students.

RICHMOND But if Amanda wanted to come back for six weeks and do the Mrs. George role, I think that might be cool? And not just Amanda — any of them!

Jonathan Bennett reprised his role of Aaron Samuels in Ariana Grande’s “Thank U, Next” video. What did you think of the tribute?

FEY She made a great Regina. I was so honored. It’s a wonderful feeling to know the movie meant so much to her and that she’s keeping it alive for a younger generation. And I’m not crazy about stunt casting, but she’s allowed to be stunt-cast in the musical anytime she wants. Call us, Ari.

RICHMOND I agree. Ariana is always more than welcome!

From 'Mean Girls' to 'Legally Blonde': A Breakdown of Movie References in Ariana Grande's "Thank U, Next" Video