Tina Fey put the life of Gilda Radner into personal perspective when introducing the documentary about the Saturday Night Live legend, Love, Gilda.

“Gilda was our equivalent of Michelle Obama,” Fey explained to the packed crowd inside New York’s Beacon Theater who came out for the CNN film’s premiere, effectively kicking off the 2018 Tribeca Film Festival on Wednesday night. “[Love, Gilda] feels like a miracle to me: It felt like I was getting time to spend with someone that I never knew, that I very much would have wanted to have spent time with.”

Fey choked up twice during her speech about the doc from first-time filmmaker Lisa D’Apolito; first when talking about the indelible mark Radner made on herself and the female comedians she came up with at SNL‘s famed Studio 8H, and a second time when remarking about how everyone knows how Radner’s story ends.

The trailblazing comedian and wife to Gene Wilder — who became a breakout star after launching SNL in 1975 as an original castmember — died at the young age of 43 of ovarian cancer in 1989.

“We talk a lot right now about visibility and representation in movies and TV; I can personally attest — and I feel comfortable speaking for Amy Poehler and Maya Rudolph and Rachel Dratch,” said Fey of her SNL co-stars, fighting back tears, “when I say that seeing Gilda as a kid — she was so lovely, but she was also so authentically herself and so regular in so many ways. She was not a piece of casting, she was who she was on the TV and we all saw that and said, ‘I want to do that and it’s possible because I see her doing that.’ It was an early example, for me, about how important representation is, for everyone in every walk of life.”

Love, Gilda uses recently discovered home videos, photographs, diary entries and audio of Radner to give viewers a condensed 90-minute look into her life — and one that is told from her own voice, thanks to the Radner family’s cooperation and archives. Familiar faces including SNL creator Lorne Michaels, Radner’s SNL co-stars Chevy Chase and Laraine Newman, ex-boyfriend Martin Short, Melissa McCarthy, Poehler, Rudolph, Paul Shaffer, Cecily Strong and Bill Hader all make appearances in the film. Some share stories and others read from her personal writings as the film tracks her childhood in 1950s Detroit to her whirlwind years with The Second City Toronto troupe, SNL and her one-woman Broadway show; followed by her marriage to Wilder and battle with cancer.

The movie does not shy away from addressing her personal struggles — like her years-long eating disorder and struggles with her celebrity and love life — but manages to do so with a touching sense of humor. At one point, her friend jokes that Radner had trouble watching the movie Ghostbusters because all the stars, except for Rick Moranis, were ex-boyfriends.

“It was a different generation, but Gilda could compete with the guys,” D’Apolito told The Hollywood Reporter of the performer being ahead of her time. “She never felt any different than any of the guys and when she felt like there was a difference, she asserted herself. John Belushi and all of them treated her like she was an equal. I’m not sure what she would think today, but I think she always thought she was an equal and why wouldn’t other people think the same way?”

Wednesday’s premiere brought out Chase, Newman and Michaels, along with the likes of Billy Crystal, Gilbert Gottfried, Richard Kind, Ray Liotta, Keegan-Michael Key and Tribeca co-founders Robert De Niro and Jane Rosenthal. After the screening, the star-studded crowd celebrated at Tavern on the Green.

For D’Apolito, who works with the Gilda’s Club charity, Love, Gilda was more than four years in the making. The timeliness of Radner’s story and fighting spirit, according to the festival co-founders, is what made the film a perfect pick to open up this year’s inclusive and politically charged Tribeca fest; 46 percent of the festival’s films were helmed by women, a historic high for the event.

“It has all the themes that resonate with us — as women, as New Yorkers and with what’s going on in our world,” Rosenthal told THR of Love, Gilda opening Tribeca, which was founded as a tribute to New York after 9/11 and is now in its 17th year. “It’s about a woman; it’s comedy; it’s about New York and celebrating. Gilda certainly knew how to laugh in the face of adversity.”

The rarity of Radner’s talent as a sketch artist are on display in the doc, which leans on footage from her performances both from Second City and SNL. A theme of the film is that she was outnumbered by men — but she wasn’t a self-proclaimed feminist. As the only female troupe member and National Lampoon show player (which also included Harold Ramis and Bill Murray), Radner talks about how she fought to stand out with her improvisation. She was the first one cast by Michaels in the original SNL lineup, but the trio of herself, Jane Curtin and Newman were again outnumbered by the male castmembers of the original seven: John Belushi, Dan Aykroyd, Garrett Morris and Chase. After only a minutelong appearance in the premiere episode, the Emmy winner would quickly go on to find her comedy voice with unforgettable characters like Roseanne Roseannadanna, Baba Wawa, Emily Litella and Judy Miller. 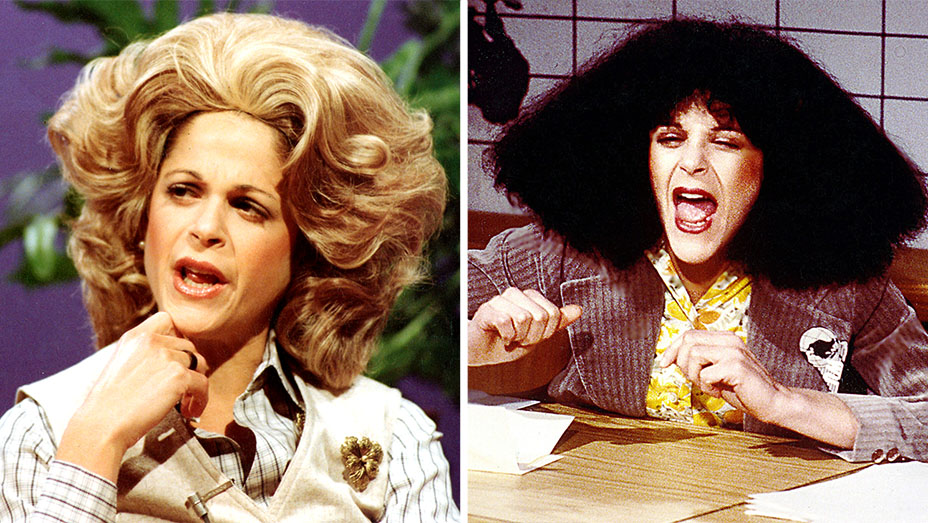 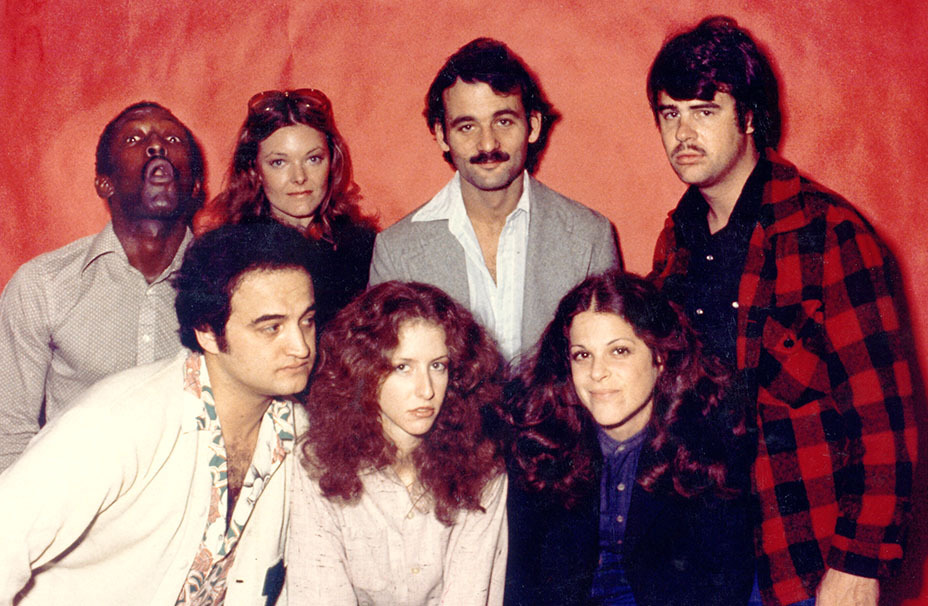 “She would do anything for a laugh,” Newman tells THR of Radner’s comedy. “Gilda probably was the first woman on TV to introduce bathroom humor. There are women who think it’s funny — there are about nine of us! — but she was certainly one. Roseanne Roseannadanna really touched on that subject and I think it paved the way for the content you see in the girls-behaving-badly movies.”

A theme of the night was how Radner opened a door for the likes of Fey, Poehler, McCarthy, Amy Schumer, Kristen Wiig and Kate McKinnon to come through with their own physical, no-holds-barred brands of comedy. Radner, after all, was the first to say “bitch” on broadcast TV and to joke about cancer (on It’s Garry Shandling’s Show), the film recalls.

“One of the reasons I love this film is that it’s a window — not into the celebrity of Gilda — but into her personal struggles as an artist, what fears she had to overcome to go on Broadway and to be on SNL, and her own insecurities,” Paula Weinstein, longtime executive vice president of Tribeca Enterprises, told THR of Radner’s bravery, which included filming herself during rounds of chemotherapy. “It’s a brave act to put yourself out there and to devote years of your life to creating characters; and she was brave in terms of fighting her illness and fighting it with wit. These are not funny times, and you need wit and activism and bravery to get through it.”

That honesty, particularly about her eating struggles, is something that Weinstein especially thinks will resonate with female viewers.

“Now, in this moment, women are being very honest with each other,” she says. “There is a call to action — the third phase of the women’s movement — and for the first time in my life, a real self-examination in the entertainment industry. When I started, there was only one woman at each studio and we all looked at each other and never thought we would ever climb higher, and we did. But there was not the sisterhood that there is now, because we were breaking ground.”

But it is also clear that Radner’s impact is gender-less.

“What influenced me was how big and broad and unabashed she would allow herself to be,” Key told THR. “When she allowed herself to be that way, then it allows you to be that way. That’s something that was instilled in me as a child so now as an adult, I can say, ‘OK, I’m allowed to go there in my comedy. I’m allowed to go that far.’ And it still affects people in a positive way.”

The Key and Peele star added, “I see her mark when I see people trying to make a social statement with comedy and also allowing the slapstick, the vaudevillian aspects and the physical comedy to exist. That goes back to Gilda — and to Carol [Burnett], Lily [Tomlin] and Lucy [Ball]. What made those women iconic and memorable was that aspect of their comedy.”

For D’Apolito, it was Poehler who put it best about why Radner’s love for laughter has the power to speak so loudly. The insight came during their interview for the film, but the moment didn’t make the final cut.

“There’s a lot of anger around and comedy plays such a part in easing tension — it’s a common ground,” said D’Apolito. “It’s not in the film, but when I interviewed Amy Poehler she said, ‘Gilda is a red-blue state, she’s loved by all.’ There’s nothing about Gilda that is polarizing to anybody, and I think that’s great.”

The Tribeca Film Festival runs through April 29. See highlights from the lineup here.