Tituss Burgess has earned four Emmy nominations for his portrayal of Titus Andromedon, the food-obsessed struggling actor on Tina Fey and Robert Carlock’s Netflix comedy Unbreakable Kimmy Schmidt — but hasn’t yet sealed the deal. The 41-year-old Broadway veteran (he originated the role of Sebastian the Crab in Disney’s stage version of The Little Mermaid) has one more shot at nabbing Titus a trophy, for his work on Kimmy vs. the Reverend. It’s a choose-your-own-adventure-style Kimmy Schmidt TV movie that mimics the interactive features of Black Mirror: Bandersnatch, with plenty of mole women and laughs thrown in.

What’s the difference between making the Unbreakable Kimmy Schmidt interactive special and a regular episode?

Oh man, it killed me. It’s so difficult. Tina Fey and Robert Carlock have a deliciously specific tone and cadence to their writing, and while it may sound like it rolls off our tongues, it can be challenging to memorize because their jokes are so dense and full of other jokes inside jokes. So you have to really be on your A-game. With that said, filming the interactive special, the scenes were all similar enough to one another that you had a general sense of what was happening, but different enough that you had to be reminded of which plot point you were in at that very moment. We were all confused about where the hell we were in the story.

How thick was the script?

[Composer and executive producer] Jeff Richmond told me that they had over three hours’ worth of footage that we filmed. So if an episode is, oh, I don’t know, 50, 60 pages, and that’s reduced to, say, 28 minutes of footage on Netflix, then multiply that by three or four, and that’s how much denser the script was.

Pacing must have been a real challenge.

It really was. The most fun part of it was that we had to film these moments where we were letting the audience decide. So you really had to lean into the pause and the ridiculousness of it all. At first I didn’t quite get it, and they were like, “No, Titus — further, go further!” It was pretty satisfying to be so absolutely irreverent and ridiculous. 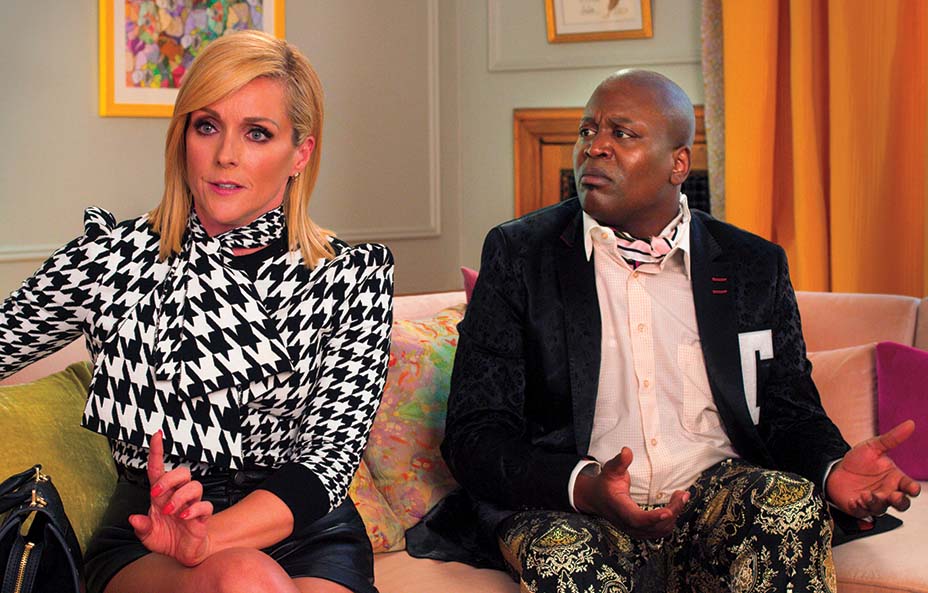 Is that the last we’ll ever see of Titus Andromedon? If any character deserves a spinoff, it’s him.

I hear that from many people. It’s a testament to [Fey and Carlock’s] writing. I love that people find Titus Andromedon so satiating. But I personally believe that he wouldn’t pop as much on his own because he needs Jane [Krakowski], he needs Ellie [Kemper], he needs Carol Kane. He needs his friends to play off of. And while Titus has some natural eccentricities and zaniness that unto themselves are very entertaining, I would be hard-pressed to figure out another world that he could exist in outside of Unbreakable Kimmy Schmidt.

Do people tend to mistake you for your character?

Oh, all the time, man. All the time. I also have to be careful how I word that, because I never, ever want to appear ungrateful toward my blessings and for the success of the show. But I do find it challenging. I often have to undo people’s preconceived notions about who I may be at the onset of meeting them. It can make for some uncomfortable situations, because I’m very uncomfortable being the center of attention.

Home for you is New York?

I used to live in New York. I lived in New York for 17 years, and I just recently moved to New Jersey, in August.

How are you finding that?

Oh, I love it. You know, I’m from the country. I grew up on a farm, believe it or not, in Lexington, Georgia. My grandparents raised hogs and chickens. They had acres and acres of corn and collard greens and watermelon, and my job was to go and feed the pigs. So I didn’t realize how much I missed grass and trees. I love Central Park — but I didn’t want to have to go to Central Park to see a tree. And now my home is full of grass and trees and open air.

I understand you’re working on a musical?

I optioned the rights to [the 1996 film] The Preacher’s Wife that starred Denzel Washington and Whitney Houston. We are in the final stages of firming up plans for a commercial run of some sort. I’ve been working on it for about 12 years now and started writing it without the rights, which I do not recommend. But I just felt in my heart I was going to get these rights. And I did.