When THR asked me to review the new Roseanne reboot, I promised objectivity. But, of course, I’d been the audience warm-up guy for the Roseanne pilot in 1988 and worked my way up on the show from writer to producer. In fact, by the time Roseanne fired me in 1994 — destroying the trophy case in my office, canceling my credit cards and promising I’d never work in show business again — I’d been executive producing and playing Arnie for a few years. So you can see why these delightful memories would make it hard not to be prejudiced.

The world is different now than when Roseanne and I went to Bill Clinton’s inauguration in 1992, and a lot has changed since the show went off the air in 1997. When I read on Twitter that there was going to be a Roseanne reboot, I was happy for Roseanne and the other actors, but I also knew the new show’s success would rest on one thing: Who will Roseanne Conner be in 2018? Because today’s Roseanne Barr is more polarizing than ever. No longer a feminist-pacifist voice for the working folks, she’s now a far-right Trump-loving troll who’s gone hard against liberals and Hillary supporters and even #MeToo women. That is not the Roseanne Barr I knew, but that’s OK so long as that’s not the Roseanne Conner she brings back to TV.

Dan is alive. Even though John Goodman’s character suffered what everyone assumed was a fatal heart attack in the 1997 series finale, he and Roseanne haven’t skipped a beat. Reboots have to be tough to write because they aren’t pilots, but they kind of are, so you have to introduce your characters to new people but not over-introduce them to fans. But honestly, once my eyes adjusted a bit, the cold open could be from the ’90s. Darlene is grown up, living at home and unemployed. Roseanne and Dan are older and take a lot of meds. The show always did a great job of organically dealing with adolescent issues, and Darlene’s gender-fluid son, Mark, played by Ames McNamara, will definitely be dealing. (I just flashed back to a long-ago writers room with head writer Danny Jacobson lecturing us about story points and me staring enviously across the table at fellow writer Joss Whedon’s beautiful flowing red hair.)

Roseanne Returns: Is TV Ready for a Trump-Loving Comic With "Nothing Left to Prove"? 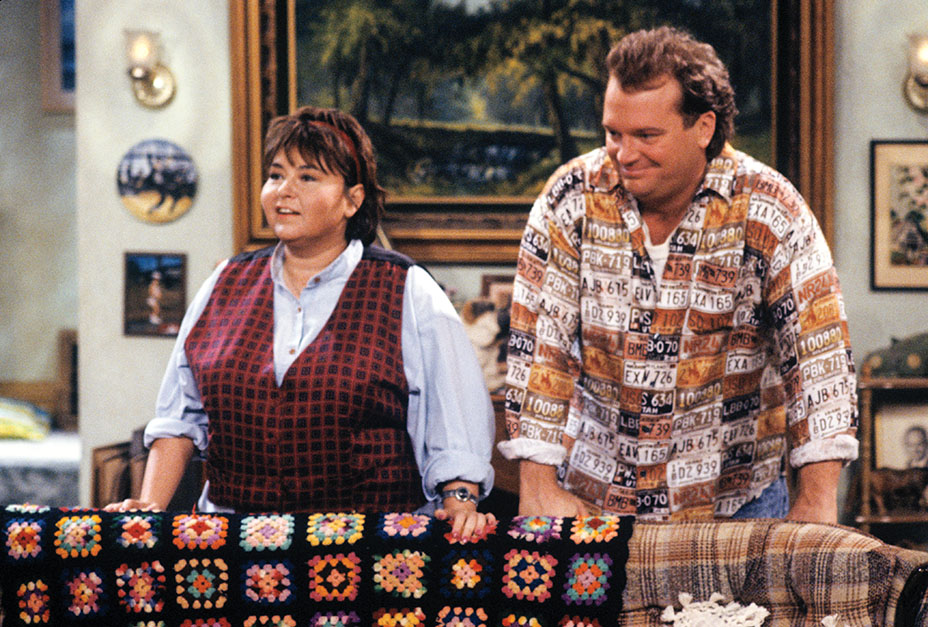 Most importantly, Jackie is in the house! I’ll full-on admit to Laurie Metcalf superfandom, personally and professionally. One night while partying during pilot week in 1988, Roseanne, who was in the front seat with Goodman, noticed me holding Laurie’s hand in back. The next morning she called me into her office and told me, “Writers cannot date actors. That’s a rule of show business.” Who was I to break a rule of show business? Never mind that Roseanne and I got married two years later (and lasted four). But Laurie is a tour de force. She could carry this show. She could carry every show ever. When she walks into what is set up to be a knock-down drag-out months-in-the-waiting confrontation with Roseanne (Jackie, Roseanne thinks, voted for “the worst person on earth”), Jackie is wearing a “Nasty Woman” shirt and has a pussy hat in hand. “What’s up, deplorable?” she greets her sister. If you just read the words of the scene that play out you’d shut off the TV, whether you were a Fox News or MSNBC fan. Their back-and-forth covers a lot of ground: health care, snowflakes, flags and guns. But the jokes work and trigger an actual common-sense gun-safety moment (that’s the show I loved). It didn’t feel at all false that Dan found the family’s handgun in an ice cream container in the garage freezer.

Michael Fishman’s DJ is back from the war with his little daughter; his wife is still overseas so I’m guessing she’s in the U.S. Air Force. Lecy Goranson, who plays Becky, has not aged and still owns her character; she’s going to be a surrogate mother for a much needed 50 grand. Of course, this raises complicated moral issues for the Conners to yell about and make jokes about, eventually reminding us why we love them. Goodman picks a precise moment to throw a coffee cup into the trash can and saunter out of the kitchen with perfection. Roseanne’s peerless timing makes two perfect jokes land, killing the weird tension, yet letting us know there’s more to come.

As always, Roseanne is best when it pulls into its core: that crazy family. New viewers might think Roseanne and Jackie are arguing about Trump and Hillary, but look at the glint in Roseanne Conner’s eyes. She’s just busting her sister’s chops, like we all do.

Bottom line: If you want to watch a show because it’s the voice of your political point of view, right or left, do not watch the Roseanne reboot. You’ll be disappointed. But if you’re a fan of the original Roseanne, especially the glory years — you know, the “Tom Arnold years” — this is as good as it’s going to get.

Roseanne has done everything from pulling my hair transplants immediately after surgery to saying I had a 3-inch penis on SNL, so I figure if I can give the show another shot, maybe other people could too. Also, there’s Laurie Fucking Metcalf. I can face all kinds of past pain and humiliation with a smile on my face because I know Laurie Metcalf walks this earth.

I can also forgive Roseanne Conner voting for Trump in 2016. I bet if you’re a Midwest housewife, he might’ve come across on TV like he really had your back. But Roseanne Barr knew Donald Trump personally for 30 years and saw how he treated women. She even did business with him. I’m not surprised by anything Trump does, but Roseanne Barr made $200 million off Roseanne Conner, so I’m a little disappointed she doesn’t have her back.

A version of this story first appeared in the March 21 issue of The Hollywood Reporter magazine. To receive the magazine, click here to subscribe.