Reverse chronology has become a familiar narrative device in film, but when Harold Pinter employed it in 1978 in his blisteringly personal drama about an extramarital affair, Betrayal, it was still uncommon enough to become highly influential. It makes the drama start from a place of awkwardness steeped in grief, two years after the illicit liaison has finished, and end at the beginning, with a rapturous sense of secret possibility, marbled by the deep vein of melancholy present from the first scene. That emotional complexity smolders like hot coals in Jamie Lloyd’s expertly calibrated production, transferring to Broadway direct from its hit London engagement.

The headline news is the commanding Broadway debut of Tom Hiddleston, taking a breather from the Marvel Cinematic Universe to revisit the stage roots to which he has returned periodically throughout his career. The coolly charismatic star is matched at every step by Zawe Ashton and Charlie Cox, the latter trailing his own Marvel association from Netflix’s Daredevil.

Lloyd staged Betrayal, one of the tightest and most straightforward (albeit back to front) of Pinter’s full-length plays, as the unorthodox culmination of an acclaimed London season of the dramatist’s one-acts. The director’s feeling for Pinter’s tricky rhythms, his freighted silences, glacial distances and brittle intimacies is unerring, evident not just in the dialogue-driven moments but also in the physical staging, the austerely elegant design choices, the stunningly descriptive use of shadow in Jon Clark’s lighting and the precise attention to movement.

The action unfolds in bars, restaurants, family homes, a regular assignation address and a Venetian hotel. But designer Soutra Gilmour’s set is a simple, stark rear wall in slate gray that makes intimate advances on the actors at times, with a sparingly used turntable that suggests the unkind passing of time, even as the scenes play out in backwards order. Among the few props are two chairs, the glasses or bottles required for a variety of alcohol, cigarettes, of course, and only late in the play, a table with an Italian linen tablecloth that becomes the saddest sight you’ll ever see.

The three principal actors are onstage for the duration, with the third player at first remaining detached in the background through each of the mostly two-character scenes. But almost imperceptibly, the tiniest flicker of reaction begins playing across the face or in the body language of the silent additional presence as key information is divulged, twisting the knife as to who knew what and for how long. It’s a masterstroke of direction, adding lacerating stabs of hurt to a drama in which none of the protagonists is overly sympathetic.

The parties involved, all in their mid-30s, are Robert (Hiddleston), a London publisher; his wife Emma (Ashton), who runs a gallery; and Jerry (Cox), a literary agent who also has an unseen wife at home. Each couple has two children. Complicating the seven-year affair of Emma and Jerry is the friendship of much longer duration between Robert and Jerry, who was best man at their wedding. The two first met when both were bright young things editing poetry magazines, Robert at Oxford and Jerry at Cambridge.

Pinter, and in turn here, Lloyd, get much mileage out of the urbane sophistication of these very English characters, consistently testing the strain beneath their polite small talk and practiced civility, with an edge of formality even between spouses and lovers.

It’s thrilling when the simmering rage beneath Robert’s smooth, at times bordering on smug, surface bubbles up, for instance in a discussion of the male ritual of a squash game followed by a pint at the pub and then lunch, his exclusion of Emma delivered like a casual body blow. Or during one such lunch with Jerry, when he rants about the tediousness of launching a novel while ferociously attacking a plate of prosciutto and melon. That his anger is never directed openly at its target doesn’t make it sting any less. 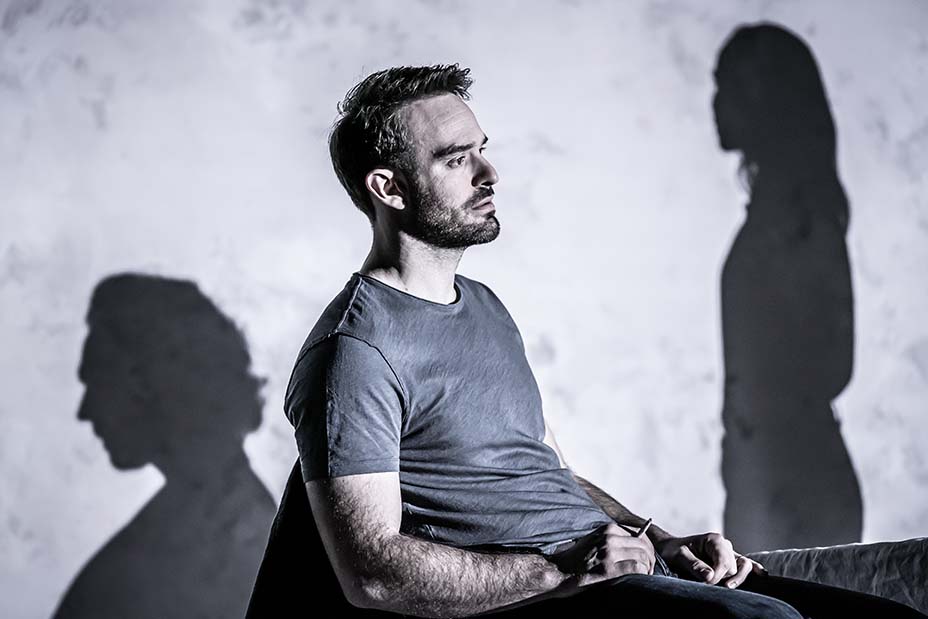 But it’s in those moments when the armor of Robert’s composure is pierced by vulnerability that Hiddleston’s performance truly dazzles. A scene in Venice, during which Robert dances around his suspicions to the point where Emma reads the knowledge of her transgression in his eyes and chooses that moment to confess, is made all the more wrenching by its restraint. As they sit side by side and she provides key details — location of their trysts, how long it’s been going on, reassurance about the paternity of their youngest child — Robert stares straight ahead, impassively absorbing the full impact as his eyes pool with tears. The generally guarded Emma’s sudden emotional release is quite different, but no less affecting in Ashton’s self-possessed but finely layered performance.

Lloyd’s brisk scene transitions add texture to the drama throughout, notably when that painful exchange segues to Emma and Jerry meeting at the suburban flat they’ve been renting, the shadow of their embrace seeming to infect the still-seated Robert like a virus.

The uncustomary choice to show one of Robert and Emma’s children (an adorable girl played at the performance reviewed by Emma Lyles) also pays off. Repeated reference is made to Jerry tossing her up in the air and catching her one afternoon in their kitchen — or was it his? It rips your heart out to watch the child giggle with joy when that happens before curling up in her father’s arms to sleep as Emma then meets with Robert early in their relationship, seemingly contemplating making a permanent change.

It might be argued that Lloyd’s repeat use of a chilled-out, female-vocal cover of Depeche Mode’s “Enjoy the Silence” is a little on the nose for Pinter (“Words like violence / Break the silence”). But the effect is powerful and the music choices, including Trent Reznor and Atticus Ross, Ryuichi Sakamoto and Norwegian electronic duo Royskopp, help thread one scene to the next, as words and wounds bleed into the spaces between.

At the beginning of the play (which is the end of the story), Robert’s infidelities also have contributed to end the marriage, two years after Emma has broken off the affair with a still-aching Jerry. But of the three, Jerry is arguably the only one who wears his guilt visibly. The excellent Cox plays that burden with a palpable sense of the pain beneath Jerry’s studied attempts to keep things light and breezy. His declaration to Emma in the final scene, at the start of their love story, is one of the most searing Pinter monologues — ecstatic in its expression of romantic feeling and yet desolate in the awareness that Emma is condemning Jerry to a kind of exquisite misery. 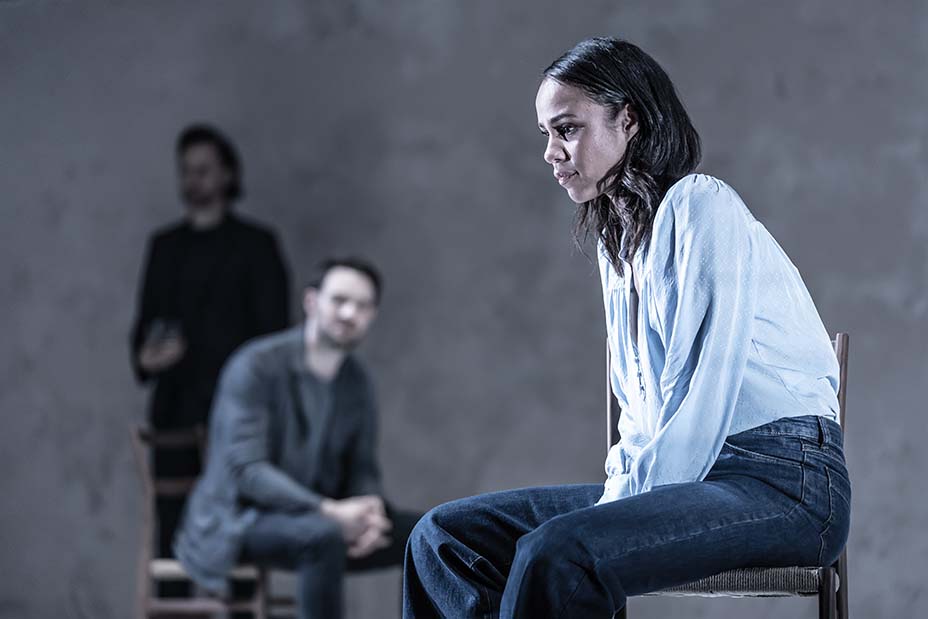 Those last three little words never sounded so doomed. The smile of contentment as Robert interrupts them, entering the room from the party all three are attending, seems veiled on Hiddleston’s face with a suggestion that he already sees what’s happening. And Lloyd stages the closing moments like a mournful dance, anticipating the pain of what’s to come.

It’s just six years since the last sizzling Broadway revival of this work, directed by Mike Nichols and starring Daniel Craig, Rachel Weisz and Rafe Spall, all in top form. But this very fine production makes an absolutely compelling case for returning so quickly to the play, in which betrayals cut in every direction — between couples, friends and within the characters themselves. Lloyd and his actors illuminate a glimmering darkness in the drama, a deeper well of sorrows that linger in the air even after the cast take their bows.

If there’s one nagging issue, it’s with the audience, not the production. While it’s great for business that fans flock to Broadway to see an MCU star like Hiddleston showing consummate skill, the constant laughs at inappropriate moments must be distracting for the actors, particularly in the many moments of quiet devastation. Sure, there are sparks of dry humor throughout Betrayal, but c’mon people, it’s Pinter, not Upright Citizens Brigade. It’s for grownups.