As the 73rd annual Tony Awards gets underway Sunday night at Radio City Music Hall, the red carpet also will make a statement with its support of Pride Month as it features a backdrop of roughly 22,000 roses tinted in a rainbow of hues to resemble the pride flag, the iconic symbol of the LGBTQ community.

For the past five years, Vogue Editor-in-Chief Anna Wintour has enlisted event designer Raul Avila, who has been crafting the decor for the annual Met Gala since 2007, to create the Tony Awards backdrop. “Anna always has such clear vision for the creative direction,” Avila said. “The inspiration meetings start at least six months before the Tonys, but the actual process starts a few days before in our warehouse, where we pre-build a wall to ensure it is prepped for the roses.” PassionRoses, a grower based in Avila’s native Colombia, donated the florals for tonight’s backdrop, he adds.

Broadway’s 2018-19 season has showcased a diverse crop of choices, and audiences have responded, generating a new box office record of $1.829 billion in ticket sales, up from $1.697 billion for the previous year, as well as a 7.1-percent increase in attendance. How does Wintour interpret this year’s record numbers?

“I think it’s a combination of a lot of things, but certainly there are great writers — ancient and modern, including a really exciting crop of very young contemporary playwrights — who have vital stories to tell and are taking on complex issues of politics, race and gender identity,” she told The Hollywood Reporter. “Luckily, on Broadway we have the directors, producers, designers and performers to communicate these stories in provocative, uplifting and engaging ways.” 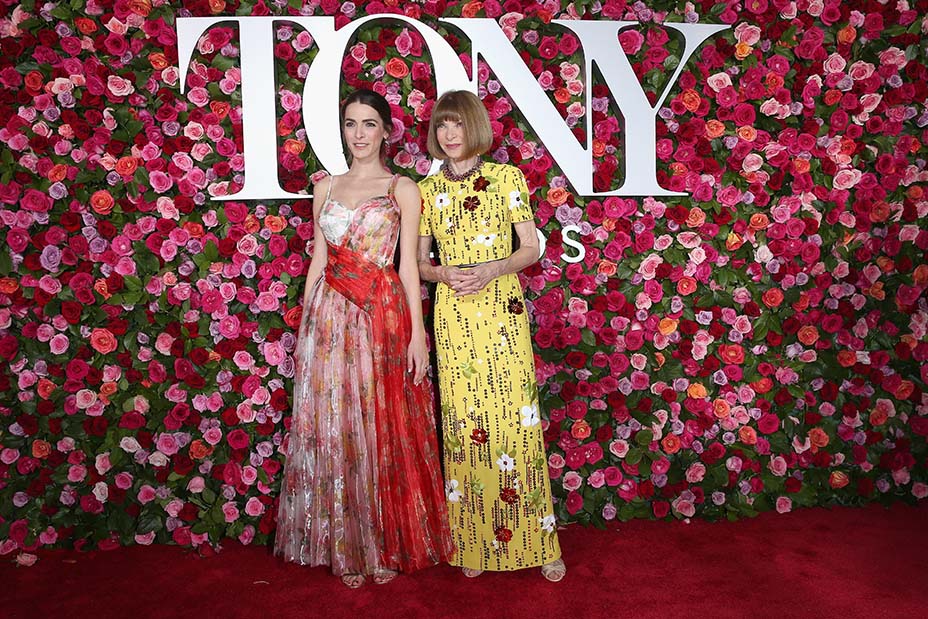 The Vogue editor-in-chief has always been an enthusiastic theatergoer, in recent years translating that enthusiasm both into the magazine’s pages and onto the Tony Awards red carpet. Vogue’s June issue includes a feature showcasing the latest crop of writers, actors and directors to conquer Broadway — with castmembers of Hadestown and Oklahoma! posing for portraits by Annie Leibovitz — while tonight’s carpet once again will reflect the influences Wintour has injected since looking at the event in 2015 and deciding it needed a style upgrade.

“There has certainly been a far more exciting engagement with fashion over that time frame, and it’s getting more exciting every season,” Wintour said. “I think that a heightened sense of glamour reflects the importance of the awards to the theater community and theater lovers, and brings more attention to the event and its honorees.”

For Sunday night’s ceremony, expect Wintour to be rooting for some of the season’s hottest shows, from The Ferryman and What the Constitution Means to Me to Oklahoma! and Hadestown, all nominees this year for Broadway’s most coveted prize. And make no mistake, she’s seen everyone, and several more, counting these nominated plays and musicals alongside To Kill a Mockingbird, Moulin Rouge! The Musical and Ain’t Too Proud – The Life and Times of the Temptations among the currently running shows she would recommend to friends and colleagues. Now-closed productions such as Choir Boy at Manhattan Theatre Club and Ain’t No Mo’ at the Public Theater also made Wintour’s list of season favorites.

“She sees everything — of all the people I’ve run into at the theater over the 18 years I’ve been in business, it’s Anna I see the most,” says designer Zac Posen. “It’s very much a mutual passion.”

Wintour’s support isn’t rooted solely in putting the look of the Tony Awards on more equal footing with the Emmys or Oscars; rather, there’s a deeper meaning to her goals, balancing pragmatism with the art form. “Broadway is one of the treasures of this city,” she says. “It generates significant revenue, but it also generates conversation and thought — there is simply nothing like live theater, and the miracle of the actors’ craft: You can’t replicate, simulate or fake it in any other medium. At its best, it is an electrifying, uplifting experience that makes you think in new ways about familiar things.”

As the Tony Awards get set to kick off, expect to see Wintour once again walking the red carpet, not only as someone who will cast an exacting eye on the look of the event, but also very much as an ardent fan. “On Broadway, there is something for everyone this season, but personally I find it really exciting to step outside my comfort zone and to be surprised and exhilarated by other voices and other points of view,” she says. “I am sure the theatergoing public — and most importantly, the ‘new-to-theater’ public — feel the same way.”