The Tony Awards have evolved into a more elegant affair in recent years thanks to Anna Wintour’s behind-the-scenes influence, but Sunday night’s ceremony honoring Broadway’s best proved these attendees desire no shortage of sartorial fun or freedom. Perhaps more than any other awards show, dressing for the Tonys takes on an unabashed air, an enthusiasm that’s equal parts individuality, bold statements and not caring even a little bit for playing it safe. The result? A colorful, joyful carpet, populated by those who understand that, in the theater community, being different is not only accepted, it’s encouraged.

Prior to the ceremony, speculation abounded that some guests might opt for rainbow-themed looks as a nod to LGBTQ Pride Month; ultimately that idea was limited to a few standout pieces, from the glittering Christian Louboutin striped ankle boots that Kristin Chenoweth paired with a black ruffled Christian Siriano minidress to the rainbow-striped evening clutch carried by Wintour’s daughter, Bee Shaffer Carrozzini, a standout against her sleeveless vintage Oscar de la Renta gown in silver metallic. (Wintour noted to The Hollywood Reporter on the red carpet that it was her daughter’s idea to construct the red carpet’s backdrop in the stripes of the pride flag, crafted of 22,000 rainbow-hued roses flanked by green hedges.) And under his signature black jacket, Michael Kors wore a black T-shirt emblazoned with his logo in rainbow stripes, part of the #MKGO capsule collection he produced for Pride Month, proceeds of which benefit the New York City non-profit God’s Love We Deliver.

Speaking of stripes, Catherine O’Hara opted for unabashed fun with her look, choosing a black and white gown from Marc Jacobs’ Spring 2013 collection. “I’m introducing Beetlejuice, so it seemed like the perfect choice,” O’Hara told THR on the red carpet; as one of the stars of the 1988 film version, the actress added that she wanted to evoke the look of the show’s mischievous title character, and she didn’t mind delving into Jacobs’ archives to find the perfect dress: “I was dead-set on wearing black and white tonight.” 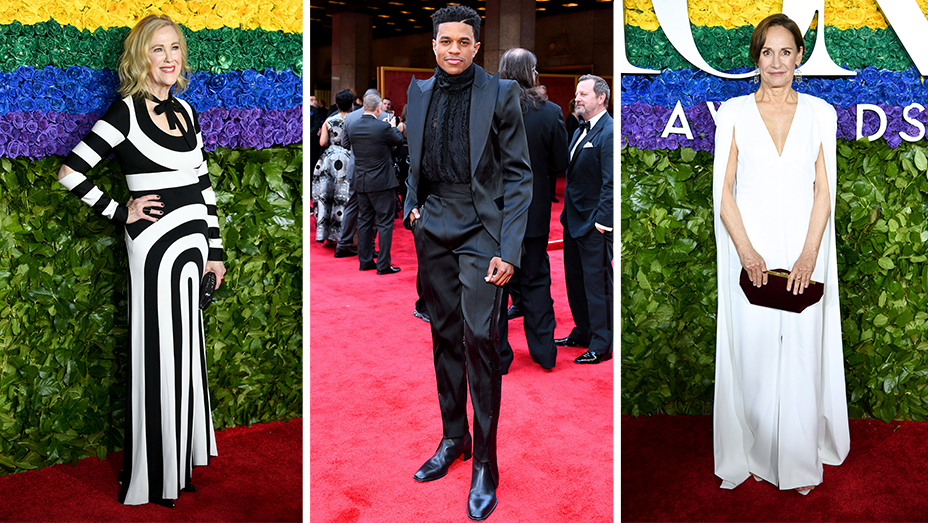 In trends, capes and cape gowns were prominent on Sunday night, starting with nominee Laurie Metcalf’s custom white cape gown by Khaite. And for those keeping a designer scorecard, Christian Siriano was the big winner: In addition to Chenoweth, the Project Runway alum and current mentor also produced a black velvet gown splashed with crystals for Laura Linney, while for Lucy Liu he created a tulle gown in deep lilac, which the actress offset with Lorraine Schwartz earrings crafted of more than 125 carats of Colombian emeralds. 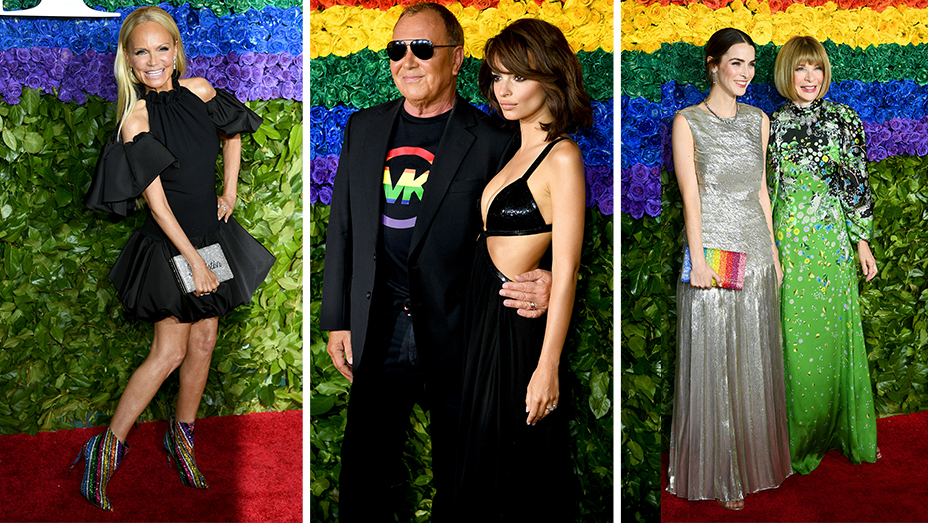 Judith Light likewise opted for sparkle, wearing a sleek silver-beaded gown accented with pink velvet by Badgley Mischka, chosen by her longtime stylist, Jack Yeaton. “I thought about elegance and simplicity and making sure that what I say tonight, the beauty and artistry of the clothing, fit the feeling of what this night is for me, which is creative and artistic and supportive and truly wondrous,” said Light, who was presented with the 2019 Isabelle Stevenson Award, a humanitarian-focused honor which the actress received for her advocacy for the LGBTQ community and her work to end HIV/AIDS.

Such thoughtful statements, a desire to transcend merely what looked or photographed best, were not uncommon. Jeremy Pope, a double Tony nominee for his work in Choir Boy and Ain’t Too Proud – The Life and Times of The Temptations, wore a tuxedo by New York-based designer Andre Landeros Michel, whose Landeros label is all about genderless clothes. “I love the community aspect he brings to his designs,” Pope told THR. “For me, that’s what this [Broadway] season has been about. There’s nothing like feeling seen and feeling heard, so I wanted to wear something that said in its own way that we’re here tonight, but for everyone watching at home, no matter what you might be going through, we see you.”

Notions of androgyny, meanwhile, are nothing new for Lilli Cooper, who noted on the red carpet that she’s been wearing a lot of suits in the run-up to the Tonys. “I’ve been into the idea of masculine/feminine-chic, also because it relates to our storyline,” said Cooper, nominated for best performance by an actress in a featured role in a musical for Tootsie. She chose to change things up Sunday night with a curvaceous gown in navy tulle by Zac Posen. “I wanted to hit tonight’s red carpet in a beautiful, sexy, feminine, womanly shape, and I knew that Zac Posen was the way to go. He knows a woman’s body better than some women do.” 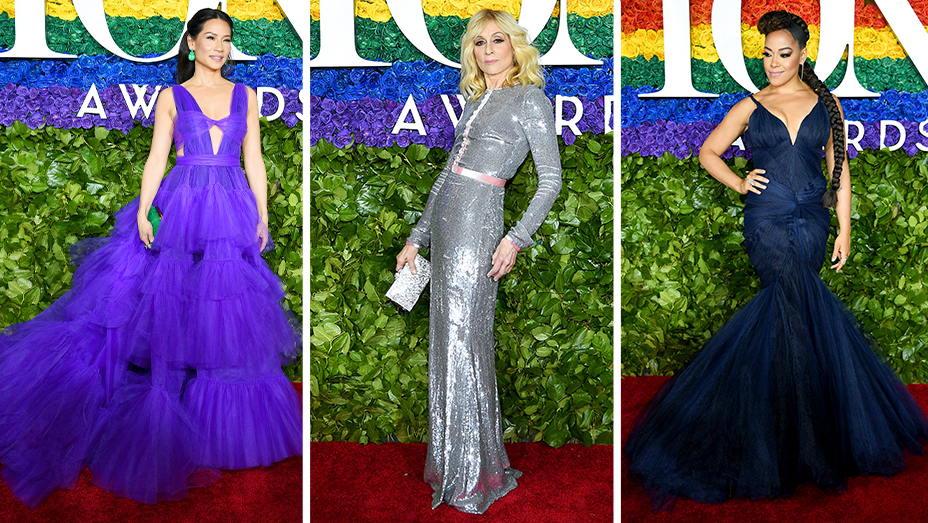 The male-peacock trend continued its awards season dominance on Sunday night, from Zachary Quinto’s navy double-breasted jacket featuring gold embroidery by Giorgio Armani to Aaron Tveit’s pinstriped suit with a long frock coat by Alexander McQueen. Costume designer Clint Ramos, nominated for his work on Torch Song, put together his look based on a jinbei, a type of kimono Japanese men favor in the summer. “A kimono plays a really big part throughout Torch Song, so I wanted to honor that,” he said, adding that the addition of multiple gold chains came courtesy of his mother. “I’m wearing all of her chains as a nod to moms — a lot of Torch Song is about gay men and their moms, so I wanted to honor her.” 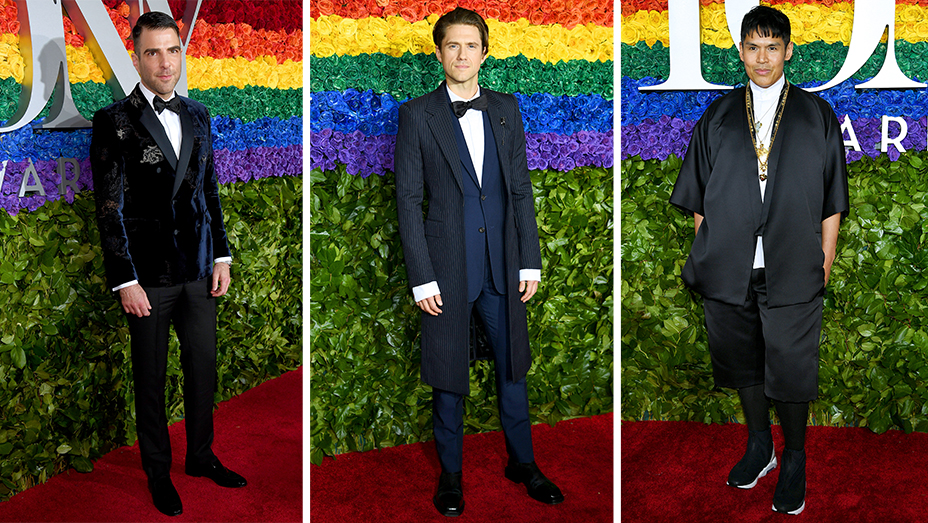 A double best-revival nominee for Oklahoma! and Torch Song, producer Justin Mikita wore a suit featuring a vintage cowboy print by New York-based David Hart. “It was my idea of farm-chic,” Mikita joked, while husband Jesse Ferguson said his olive silk suit by Savile Row tailor Richard James was only meant to complement Mikita’s moment. “I’m the arm candy tonight,” Ferguson added. The Modern Family star — who will be seen in next season’s revival of Richard Greenberg’s Take Me Out — accented his suit with a bowtie from his Tie The Knot collection, which supports LGBTQ rights throughout the U.S. Ferguson added that The Tie Bar’s Madison Avenue boutique is hosting a Tie The Knot pop-up showcase throughout Pride Month.

If there was a color trend on Sunday night, it was bold, unapologetic red, with the occasional accent of pink, such as the Prada satin draped halter gown seen on Regina King. Among the night’s most anticipated arrivals was Billy Porter, who worked with New York label Celestino Couture to create a statement in pink and red as his nod to supporting women’s rights. (Porter accented his look with a trio of floral diamond brooches by Oscar Heyman, a continuation of the lapel-pins trend seen throughout this awards season, also adopted by Tveit and Tootsie’s Robert Horn, who picked up his Tony for best book of a musical in a tux adorned with a diamond lily of the valley brooch.)

Crimson tones included Ruth Wilson’s Brandon Maxwell cape gown in a fil coupe red leopard, but it was the Hadestown team that chose, mostly, to embrace the hue as a group. The exception was André De Shields, who won his Tony for best performance by an actor in a featured role in a musical wearing a gold-embroidered frock coat by Randi Rahm, paired with the gold metallic winged sneakers that Jeremy Scott produced as a collab with Adidas. In Hadestown, De Shields plays Hermes, often referred to as a trickster in Greek mythology, so his look Sunday night seemed fitting, he said. “This is what Hermes would wear to the Tonys,” De Shields explained. 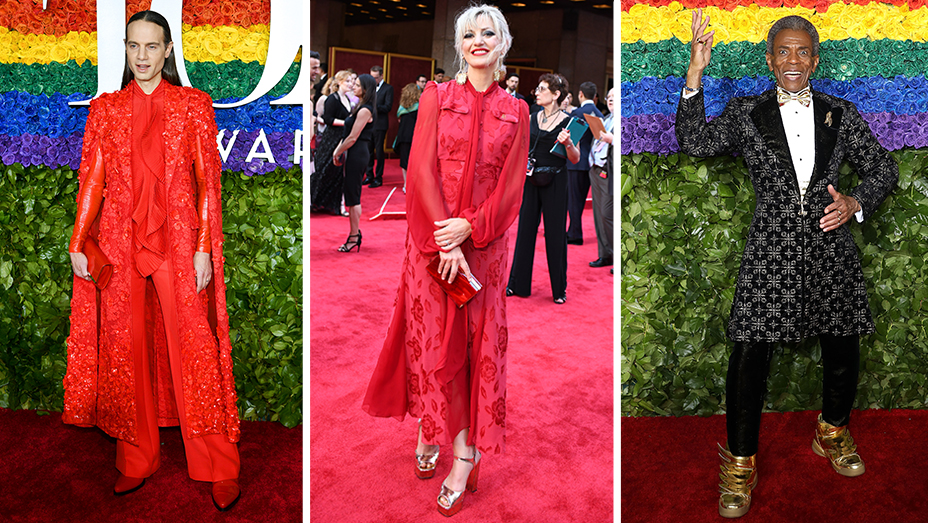 Hadestown creator Anais Mitchell opted for a red silk tie-neck gown by Prabal Gurung as an homage to the show, which ultimately took home eight Tonys out of its 14 nominations. “We have a motif in our show of this red flower that appears and symbolizes the coming of spring and cosmic love, so it felt totally intuitive to wear this dress,” she told THR.

Producer Jordan Roth took the idea a step further, commissioning Givenchy to create a head-to-toe look featuring a red suit, pleated shirt and matching beaded-lace cape. “There’s a lyric at the end of the show that I absolutely love: ‘Some flowers bloom when the green grass grows; our praise is not for them, but the one that blooms in the bitter snow, we raise our cups to him,'” Roth noted on the red carpet. “Anais Mitchell’s beautiful words are what inspired this look. But that’s also how I think of so many of us here tonight: We are the ones that bloom in the bitter snow.”