What do Paris Jackson; Tyler Clinton, nephew of former President Bill Clinton and Hillary Clinton; transgender actress Hari Nef; and Oscar-winning screenwriter Dustin Lance Black have in common? They’ve all recently been signed to major modeling agencies (Clinton, Nef and Jackson to IMG; Black to Wilhelmina), many of which are setting up shop in Los Angeles, considered by industry insiders to be the hotbed for scouting millennial, camera-ready talent. And they all represent today’s new model of model: not just pretty faces or starlets but social media-sanctioned talent with entertainment ties and built-in name recognition. With its move to L.A.’s Pacific Design Center, revealed to THR, IMG Models will join the recently opened West Coast outposts of Wilhelmina and the Lions Model Management. “It’s a natural extension that L.A. is the place for agencies to be,” says preeminent New York-based model casting director James Scully, who has worked with Tom Ford, Stella McCartney and others. “The Gigis and Kendalls are there, there’s the L.A. health ideal that’s so attractive to fashion right now, and the kids are Insta– and entertainment-ready.”

Since 2012, when designer Hedi Slimane moved his Saint Laurent studio from Paris into the same Regen Projects space that was leased in March by Tom Ford for his newly stateside design atelier, L.A.’s status as a fashion capital has continued to ascend. “California is the place to be, the melting pot for entertainment,” says Faith Kates, co-founder of Next Model Management, which represents The Atomics singer Lucky Blue and model-actress Abbey Lee, among others. Where else can the industry’s roving eye find the talent to sell brand narratives? “Fashion is now about storytelling; it’s got to be a personality,” says Ivan Bart, president of IMG Models Worldwide, where he has worked since 1994 overseeing the careers of Gisele Bundchen and Gigi Hadid and this spring signed Jackson (with a lead from WME co-CEO Ari Emanuel) and Tyler Clinton. “I think [Tyler] would like to be an actor, but he’s also into fitness and wellness,” Bart says, “and he’s a very sharp young man.” 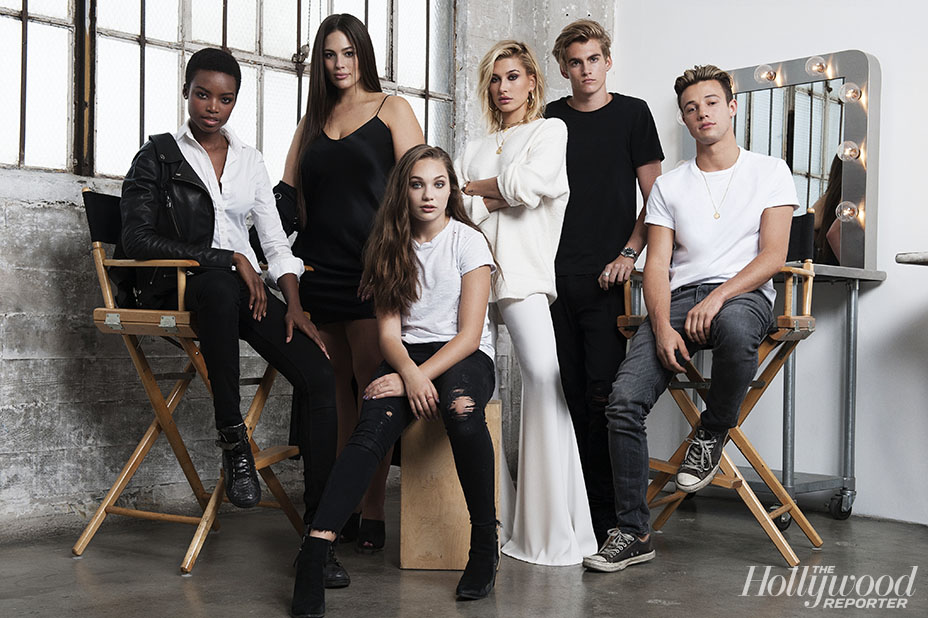 Wilhelmina CEO Bill Wackermann — who in the past three months has added Black, Milo Gibson (son of Mel Gibson) and Nicki Minaj to his roster — adds: “Brands are looking for individuals to bring a story and a point of view.” (Of Minaj, Wackermann says: “She’s the ultimate risk taker; she speaks for women who are not 5-foot-11 who love their bodies and curves.”) And for better or worse, nobody beats Hollywood legacies for having name value with a baked-in story, from Steven Spielberg’s daughter Destry Allyn and Sean Penn and Robin Wright’s daughter, Dylan Penn — both clients of L.A.’s DT Model Management — to Next Model Management’s Dylan Jagger, Bob Dylan’s grandson Levi Dylan and Brandon Thomas Lee, whose parents are Pamela Anderson and Tommy Lee. IMG Models clients include Sistine Rose Stallone, Gabriel Day-Lewis and Patrick Schwarzenegger, among others. “Talent is literally in their genes,” declares Mimi Yapor, who is heading up the L.A. IMG Models office. To eye-rolling detractors, she counters: “We have to step back and ask what sells clothes. The skinny girl who wears clothes perfectly is not going to excite people enough to stand in line for two hours for the latest H&M collaboration.”

L.A. is teeming with not just children of celebrities, but also singers, dancers, reality show stars, internet-famous heartthrobs with millions of followers and even skaters on the Venice boardwalk, each individual brand-ready and with a robust social media following. “L.A. is the epicenter of ‘slashies‘ because there are so many different veins of entertainment,” says Yapor, referring to the notion of industry multihyphenates. She recently signed dance prodigy and Sia protege Maddie Ziegler, a WME client who has appeared on Lifetime’s Dance Moms, was a judge on So You Think You Can Dance, published a memoir at the ripe old age of 14 and makes her feature debut this month in The Book of Henry. “I thought my whole life I was just going to be a dancer,” says Ziegler.

IMG has been ahead of the new-model curve since it’s a combined fashion and entertainment entity, having merged with WME in 2013. The opening of its L.A. office closes the loop for potential crossover among divisions of WME-IMG, which also produces New York Fashion Week and the open-to-the-public MADE L.A. on June 9 and 10 at L.A. Live, where WME client Snoop Dogg and IMG Models client Wiz Khalifa will debut their clothing lines. Bart points out that Jackson, who signed a contract in May to be a face of Calvin Klein, is a prime example of the agency’s synergistic strategy: “Right now, her core business is in the fashion space, but I’m also on a litany of emails about all these castings she’s going to, and she’s already done an episode of Lee Daniels’ Star.”

Despite the allure of a Jackson or a Ziegler, Hollywood adjacents are not the only focus of IMG Models, which has made diversifying the industry a priority for the last six years. “It doesn’t matter what race, sex or size, a star is a star,” Bart says of signing Nef, one of the new faces of Gucci Bloom perfume. Bart has also scouted hijab-wearing Muslim model Halima Aden, who in less than a year went from being a burkini-clad semi-finalist in the Miss Minnesota beauty pageant to the runway for Kanye West’s Yeezy collection. He brought on Angola-born Maria Borges, the first afro-coiffed model to walk the Victoria’s Secret show in 2015. And he helped Ashley Graham become the first plus-size model to land the cover of Sports Illustrated‘s swimsuit issue, introducing her to WME partner Nancy Josephson, who has overseen her transition into television and books. “It’s just more commerce for everyone,” says Josephson.

“It used to be, models moved to L.A. for their careers to die,” says Graham, who is shooting her second season on America’s Next Top Model in L.A. “Things are changing. I’m not even talking about changing the ideal of beauty, I’m talking about our jobs.”