In late March, when Robert and Michelle King convened the writers room for their supernatural drama Evil, they plotted out a second season premiere in a haunted New York City subway station.

Now, more than two months later, as the novel coronavirus continues to ravage so much of the world, the idea has been scrapped at the behest of their line producer, who warned that filming permits would be hard, if not impossible, to come by. When the CBS series does return, the season opener will explore the spiritual consciousness of its characters instead, with a storyline devoted to the “God helmet” and its virtual-reality-meets-peyote-style impact. It’s a plot perfectly suited for a post-pandemic world, explains Robert King, because it relies heavily on visual effects. “You have to look at scope in a different way,” he says, in this case referencing the scope of the brain rather than scope of a subway.

In virtual rooms all over Hollywood, writers like the Kings are being asked to rethink what could be feasible once production resumes. Many are waiting to actually tweak their scripts — “I don’t want to have to rewrite everything six times while the guidelines change,” says Shameless‘ John Wells — while others are already avoiding or scrubbing crowds, hugs and handshakes. Sex scenes and fight scenes will need to be carefully considered, too, and in some cases reconsidered as storytellers along with their line producers and studio bosses navigate an unknown future.

“What we’re telling our writers is ‘Don’t be dumb,’ ” says one studio executive, who suggests that an elaborate crowd scene with dozens of extras would surely qualify. “We’re not going to be able to shoot it, so don’t write it.”

Regardless of directives, which vary by studio, more than a dozen producers who spoke with THR say their anxiety lies largely in the uncertainty. “It’s very hard when you don’t know what the future looks like,” says Marta Kauffman, showrunner of Netflix’s Grace and Frankie, whose situation is made more complicated by the fact that the youngest of her four leads is 79 years old. She has yet to go back into her scripts and start making the necessary changes, but that’s coming, and she’s dreading it. “We had scenes at our assisted living facility with a crowd, and, well, we can’t do that anymore. And we know we certainly won’t be doing lots of kissing with elderly people, but it may have to go beyond that.”

Though Kenya Barris’ actors are several decades younger than Kauffman’s, he’s having trouble wrapping his head around how he’ll make his Freeform series Grown-ish, which takes place almost entirely on a college campus. “It’s literally about a place where people gather,” he says, “and you can only do so many [contained] bottle episodes before it starts to lose the tone and feeling of what the show is.” Meanwhile, Mythic Quest‘s Rob McElhenney was smack in the middle of shooting a scene set at the E3 gaming conference when production shut down. “There were literally thousands of people in the audience, and that’s not going to happen anytime soon,” he says. “So I’m going to have to rewrite it and reshoot it.”

The days of doing a dozen extra takes are likely over, laments another producer, and shooting long just to have it, too. In fact, one executive suggests scripts could soon be five or six pages shorter ultimately, to make room in a show’s budget for pricey protocols like crew-wide testing. There have been rumblings of putting line producers into writers rooms as well, though writers with any modicum of power are likely to resist additional infringement on the creative process. (“It’s a terrible idea unless you have an irresponsible showrunner,” says Kauffman.)

Writers will also be asked to lean on fewer characters along with special effects to provide scale. As one producer explains, if a pre-virus scene was set at a backyard birthday party full of children, the post-virus one will have two or three characters sitting around a kitchen table talking about the party — and any flashes to it would largely be CGI. 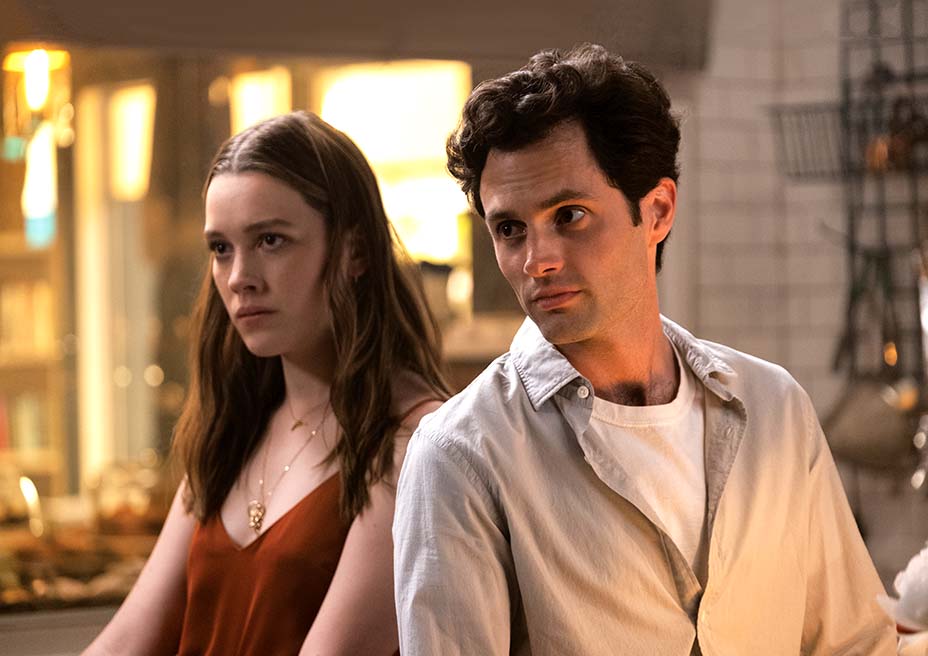 “The technology that brought you dragons and exploding people is the same technology that will be bringing you ordinary crowd scenes on shows you wouldn’t expect [to use] visual effects,” says You‘s Sera Gamble, who suggests CGI will be of little help on her intimate scenes, which she isn’t interested in writing out. “We’re not at the place in 2020 where we can talk about using visual effects to fake a kiss between [You stars] Penn Badgley and Victoria Pedretti — that’s a separate issue and one we have to figure it out.”

In recent weeks, writers such as Gamble have been looking abroad to see and study how productions elsewhere are grappling with the same challenges. All eyes are on Australia’s long-running soap Neighbours, which announced it’s resuming without extras or physical contact between castmembers. The show’s producers have said they’ll cut away before a kiss or punch, relying on the audience’s imagination to do the rest. It’s a strategy that some will consider stateside, too, particularly when it comes to intimacy.

Other approaches being discussed involve facilitating separate shoots, which can then be pieced together in post, and quarantining participating talent for 14 days, with testing done regularly, before shooting the scene in full. The actors involved with the latter would have to be OK with that plan, of course. “And if they’re not, you’re fucked,” says one executive, “because you can’t force an actor to do something that they’re not comfortable with.” At least two more predict those kinds of conversations about comfort levels — both general and specific — will start to happen with No. 1’s on every call sheet in the coming weeks, if they haven’t begun already. And the responses are expected to vary, particularly among the older and more vulnerable set. Regardless of how many safety measures are put in place, there will be some who simply won’t feel comfortable and, as one network head warns, some shows could go away as a result.

For the time being, writers seem to be relying on their own gut to guide them. Barris, for instance, won’t be writing in handshakes anytime soon, since he cringes every time he sees one on TV now. “I’d be less offended if you came up and cupped my girl’s boob than shook her hand,” he jokes. Curb Your Enthusiasm boss Jeff Schaffer agrees: “The handshake is gone,” he says, “it’s the VHS of salutations.” And McElhenney’s partner, Megan Ganz, reveals she’ll be editing out a pre-pandemic line in which Mythic Quest‘s lead characters are asked, in response to their slacking, “What have you been doing for the past six months?” because it no longer feels right.

Studio and network execs must rethink their choices, too: Some are looking to their own libraries for contained shows that might be worth rebooting, while others are exploring potential series add-ons where only a couple of characters are needed. Working in their collective favor is an overwhelming desire among most casts and crews to get back to work. Says Black-ish showrunner Courtney Lilly, “If [our show] ends up being a one-act play for 21 minutes between two characters so that people can work and America can see characters they like onscreen doing something that isn’t a repeat, we’re going to find a way to do it.”

It’s a sentiment shared by many — just not all. Robert King falls among the skeptics: “Oh my God, network shows can’t be made more boring,” he says, horrified by the notion of having to scale Evil or The Good Fight down to a series of two- or three-character scenes. “You need to find ways that are visually interesting and inspired, and if you start limiting things, it’ll just be, ‘Why do I want to watch that? I’ll wait for the newest Netflix thing that’s shot in Hungary or somewhere where they will let people sit on each other’s laps.’ I just think everybody needs to calm the fuck down and not write with the idea of limitations in mind — or [at least] not as the guiding force.”