One of the toughest tasks in acting is to step into a role indelibly associated with a particular interpreter. In the case of Torch Song Trilogy, that challenge is magnified by the fact that the original Arnold Beckoff, the gay, drag-performer protagonist searching for love and family in New York in the 1970s and early ‘80s, between Stonewall and AIDS, was playwright Harvey Fierstein. Anyone who saw Fierstein’s virtuoso turn in the Tony-winning 1982 Broadway production, or even the shortened, sweetened 1988 movie version, will have a hard time not hearing his unmistakable foghorn rasp delivering the wisecracks that pepper his script.

In Second Stage’s choppy revival, with the original four-hour triptych condensed and the title abbreviated to Torch Song, director Moises Kaufman and star Michael Urie (Ugly Betty) battle against that past association by inflating the lead role into an emphatic caricature.

The larger-than-life personality that comes so naturally to Fierstein looks like work for the talented Urie, whose vocal affectations occasionally recall his Brooklynese Streisand impersonations from the hilarious solo play, Buyer & Cellar. Just as often though, he seems to be channeling Snagglepuss, the pink Hanna-Barbera cartoon mountain lion whose deadpan, downward-inflected delivery drew from Bert Lahr by way of Charles Nelson Reilly. Given the extensive editing of the original text for this revival, it’s perplexing that Fierstein chose to leave in references to Arnold’s throaty voice or his size that reinforce the identification of the role with its author.

While Urie’s strained vocals grow wearing, turning his occasional throwaway lines into welcome bursts of oxygen, the actor’s resourceful physical-comedy skills provide more consistent pleasure. But only in the play’s superior final act, when he’s matched with a comparably outsize scene partner in Mercedes Ruehl as Arnold’s archetypal Jewish mother — swooping in from Florida in an orchid-pink traveling suit, a lacquered bouffant and a Miami Beach cancer tan — does he dig into the pathos, anger and desperate longing of this complicated character. 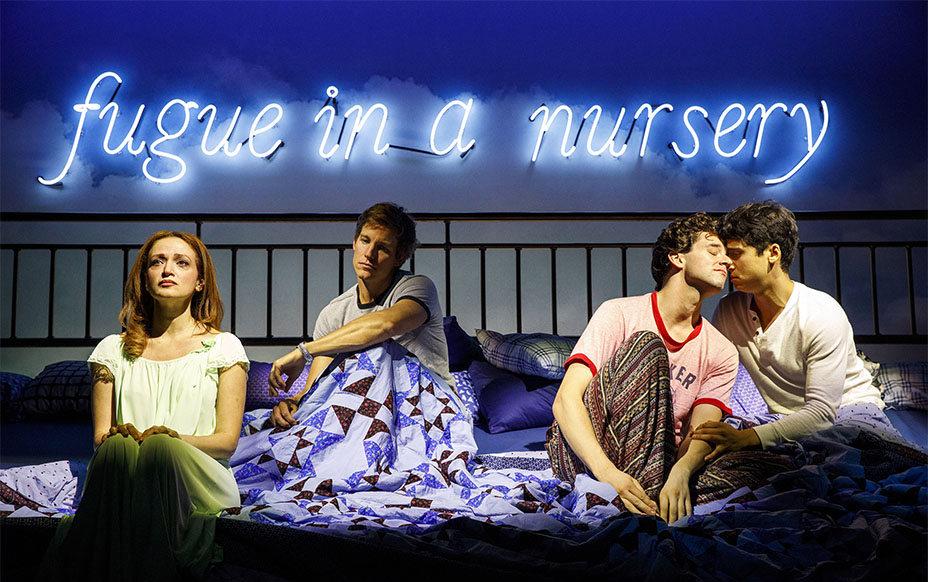 The plays originated as two separate works, International Stud and Fugue in a Nursery, that debuted off-off-Broadway before Fierstein added a third part, Widows and Children First, stitching them together into one marathon piece that seemed more fluid back then than it does in this revival. The three acts, set in 1971, 1974 and 1980, respectively, retain their individual titles — spelled out in neon by set and lighting designers David Zinn and David Lander, and framed in a beat-up burlesque-style proscenium with the overall title in battered signage above. The years are significant, serving as a reminder that Torch Song Trilogy represented a major breakthrough in its treatment of gay characters and relationships, a milestone to which popular-culture hits like Will & Grace and Modern Family owe a profound debt.

In this era of post-equality gay domestication and legalized marriage, Torch Song is a time capsule that transports us back to a period when basic partnering and parenting rights entailed a battle against bitter prejudices. Political and social progress have greatly improved the picture, even if pockets of intolerance remain — the Vice President’s office, for example.

Arnold perceives himself as a great tragedienne, a tortured romantic like the divas of yore that he emulates in his drag act as Virginia Ham. The heartsick lyrics of Helen Morgan and Bessie Smith speak to him, even if that motif has been mostly lost in Kaufman’s production. What made Arnold such a wonderfully militant character back when he was first introduced was his refusal to accept that his right to love a man, mourn a partner or raise a child was any less sacred than his mother’s. The play inevitably is dated, but Arnold’s unapologetic convictions make him still a stirring figure today, even if the rights he demands are now more universal.

In the first act, Arnold directly addresses the audience from his dressing room as he puts the finishing touches on his makeup and gets into his wig and gown for a show. A self-deprecating neurotic with a gift for zingers, he dreams of an “international stud,” like the name of the gay bar he frequents, a man who wants all of him, not just the protected part behind the sequined disguise. Arnold convinces himself that he’s found his heart’s desire in handsome schoolteacher Ed (Ward Horton). But Ed is uncomfortable with his sexuality, dumping Arnold to take up with Laurel (Roxanna Hope Radja), a sweet, self-deluding woman with a weakness for unavailable men.

The second part, cleverly staged in an enormous bed covered in a homey patchwork quilt, shifts to the country house of Ed and Laurel. Arnold has brought his new boyfriend Alan (Michael Rosen), a young model, to stay for the weekend, causing old and new attractions to flicker, and jealousies to surface — though not from Laurel, who is revealed to be the most open-minded and mature of them in Radja’s appealing performance. 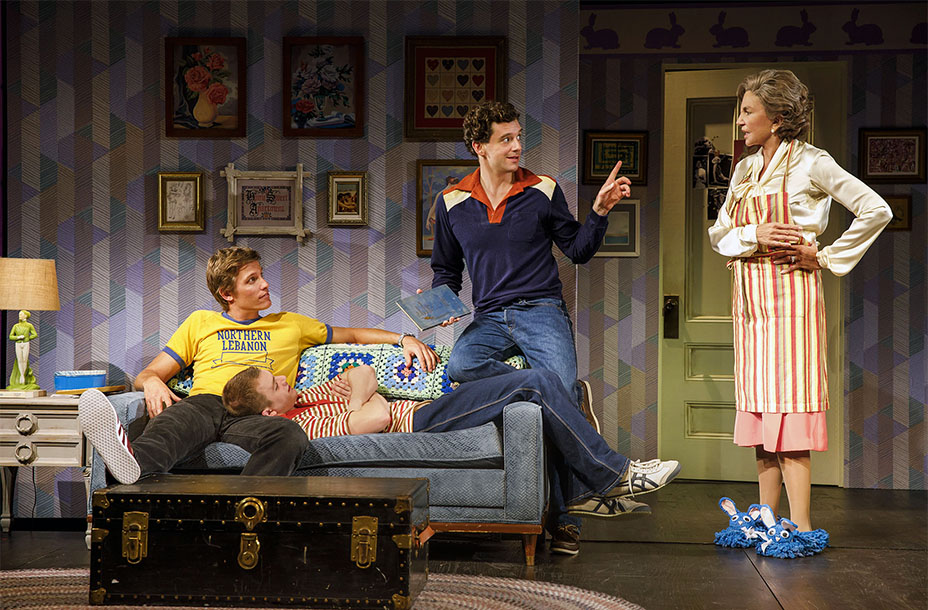 The third act takes place back in Arnold’s New York apartment. A shocking hate crime has left him single again, but he’s acting as foster parent to troubled gay youth David (Jack DiFalco), with plans to adopt him once the trial period is over. Arnold’s mother, flying in from Florida, knows nothing of his desire to be a parent and prefers to know as little as possible about his homosexuality, still clinging to the hope that he’ll meet a nice girl and settle down. Threatening to create further confusion, Ed is having marital problems with Laurel and has been staying on Arnold’s sofa.

The setup for this last and most satisfying section flirts knowingly with sitcom, which makes its poignancy all the more welcome and unexpected. But the cuts to the text shortchange the sorrow of Arnold’s loss, since we barely have time to invest in his relationship with Alan — given a rather one-note reading by Rosen as a frisky twink with no depth. DiFalco is the ensemble’s other weak element, playing up David’s cockiness to an extent that erases any trace of the vulnerability or emotional need of a 15-year-old who has spent three years living on the streets.

However, what undeniably works is Urie’s beleaguered Arnold standing up to the formidable Ruehl as his unyielding mother — her eyes blazing, ready for a fight from the moment she enters. She still believes being gay is a perverse lifestyle choice, not a biological factor. Fierstein states both their positions in opposing corners without judgment. That makes their refusal to understand one another quite moving, as is the clear suggestion that, somewhere down the line, an inevitable detente awaits. The exhaustion of negotiating with his mother while worrying about David also makes for an affecting conclusion, as Arnold reluctantly leans toward giving Ed another shot.

The on-off relationship between Arnold and Ed, and its possible resuscitation, is this production’s center, and the easygoing directness of Horton (Annabelle) in the key romantic role makes us root for it to work out. But without Fierstein’s own unique brand of big-hearted, sloppy sentimentality inhabiting the central character, Torch Song is a more pallid ballad, bittersweet and frequently funny but lacking the vitality to fully sustain its two-hour-40-minute run time.