On a hot August day, a scruffy Daniel Roher steps out of a dark Technicolor edit suite in Toronto and appears remarkably calm and assured barely two weeks before his documentary, Once Were Brothers: Robbie Robertson and The Band, opens the Toronto International Film Festival. Much like the subject of his film, Robbie Robertson, who went to the Deep South at age 16 on a musical mission, Roher, then 18, told his parents he was dropping out of school to become a filmmaker. With his bar mitzvah money, he started making documentary shorts all over the world — Canada’s remote arctic, Uganda, the Middle East — often dreaming of doing one based on Robertson’s 2016 memoir, Testimony.

Roher, now 25, recalls coming face to face with his fellow Toronto native in Robertson’s L.A. recording studio in August 2017 to pitch the musician on his vision. He had been flown in by Toronto-based White Pine Pictures, which had optioned Robertson’s autobiography and was in search of a director. (Magnolia Pictures bought worldwide rights to the film mere hours before its premiere.) Roher, a lifelong fan of Robertson’s thanks to near-lifelong exposure to The Band’s music via his parents, promised to work “25 hours a day, eight days a week” if allowed to direct the film. The pitch worked: Robertson told the precocious filmmaker, “Kid, let’s make trouble together.” Now Roher tells THR how he landed Eric Clapton, Bruce Springsteen and Martin Scorsese to create a confessional tale of a rock legend who, with his brothers in The Band — Rick Danko, Richard Manuel, Levon Helm and Garth Hudson — created some of the most timeless songs in music history.

'Once Were Brothers: Robbie Robertson and The Band': Film Review | TIFF 2019

Why did you feel such a strong need to make a documentary about Robbie Robertson?

The reason why Robbie matters and why we need to celebrate not just the Robbie Robertsons of this world but his contemporaries is because these men and women were foundational and critical in crafting the music that became the music to so many of our lives. And that’s a fantastic creative contribution to our world.

Your film isn’t about Robertson today, but of an ambitious young man growing up on a Native reserve and leaving Toronto at age 16 to go to the Deep South on a musical mission. Why did you choose to focus on that part of his life?

Robbie was in this group with four very close friends. The film is called Once Were Brothers because they had this brotherhood. And they were a musical team since the time they were 16 and 17 years old until they were in their 30s. And when I started, it was to be a film about my rock ‘n’ roll heroes — Robbie, Levon, Rick, Richard and Garth. They are mythic. And now that I’ve made my film, I realize that it’s about five very fragile young men who find themselves in a difficult situation — which is dealing with phenomenal success. They were trying to do the best they could with their own insecurities and personal demons and struggles and addictions. A lot of those factors led to the fabric of this brotherhood breaking down. And that’s quite poignant and sad.

Many rock bands get to the top by being hardworking but reckless. Robertson certainly worked hard, but he looks to have known how to stay on this side of reckless.

It’s something my film talks about a lot. Robbie’s ex-wife, Dominique, who is an addiction counselor and an incredibly thoughtful woman, told me Robbie didn’t have that gene that would cause him to become an addict. But in the 1960s and ’70s, when Robbie was a member of this group and three of his five bandmates had serious alcohol and chemical dependencies, there was no lexicon to describe this as a mental health issue. As Dominique said, it felt like a betrayal [to Robbie]. You’re putting yourself before the group. You’re sabotaging the group. You’re not focusing on the big picture, on the work. And Robbie, for all I know about him at 25, he was all about the work, with a laser focus. 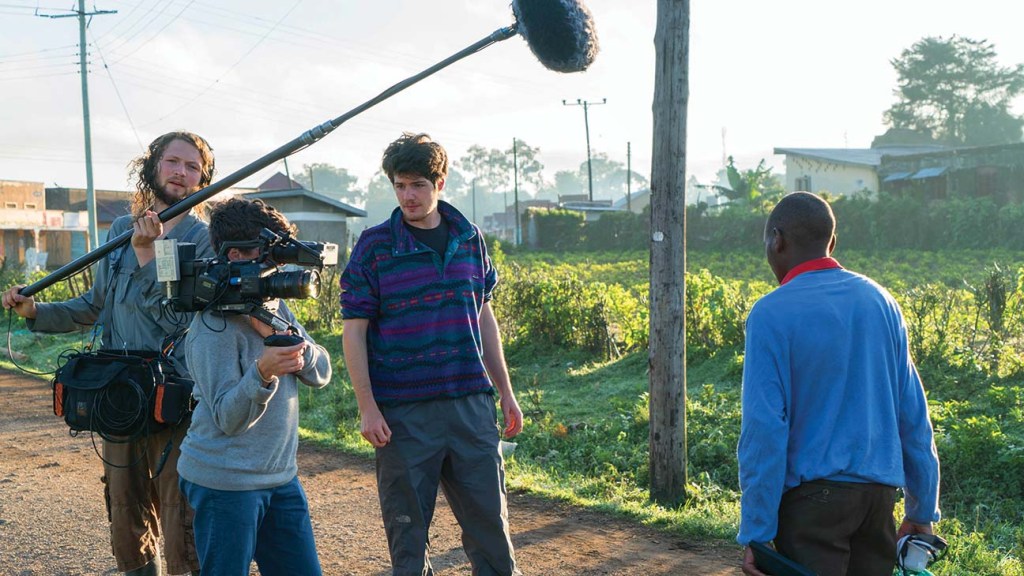 When Robbie was 16, he told his mom he wanted to drop out of high school and audition for this rockabilly guy, Ronnie Hawkins, and join his band. That must have been a crazy idea. But Dolly, his mother, understood his passion and said, “OK, go try it, and if it doesn’t work out, you’ll go right back to school,” and he agreed to that. And when I was 18, I called my parents and said I wanted to drop out of school and make documentaries. And they said, “What’s your plan?” I said I wanted to make a film in the Middle East and then this film and that film. And they said, “OK, sounds like an interesting plan. How can we help? What you need?” And it was that support that put me on the path to success, certainly.

Once Were Brothers has a lot of big names: Scorsese, Ron Howard, Brian Grazer, Springsteen. How did you get them?

I was around 22 and read Robbie Robertson’s book and did a lot of work on spec. I put together this 30-page document to plant my flag. And I found out White Pine Pictures had the project and had hired a director. I was devastated. But Robbie didn’t hit it off with that director. They needed someone else. So I met with White Pine, and I always had this vision that, if only I could meet with Robbie, I’d tell him no one will give this film more than I will. I’ll die before this movie isn’t great. You got to let me do this. I just needed that shot. White Pine said OK, and I went down to Los Angeles, to his studio, to meet with Robbie.

Do you anticipate opening-night jitters having to address the full Roy Thomson Hall audience? I just feel very Zen. I still have to decide what to wear at this exciting gala. What else can I say?

It’s tough to metabolize success like this. I’m trying to stay focused and realize it’s a means to an end. There’s a lot of big egos at play, so I have to keep those people happy. That can be a balancing act. And it’s beyond a dream come true. I never dreamed this was possible, for this film. So it has exceeded all my expectations.

This story first appeared in The Hollywood Reporter‘s Sept. 6 daily issue at the Toronto Film Festival.