I could barely speak or move. My body was shaking so much when I found out I was nominated for an Emmy in the outstanding actress in a shortform comedy or drama series category.

What moved me the most was not only seeing my name on the list but seeing Razor Tongue and my independent production company (Now>Ever) next to my name. It was a testament to building my own table when there previously seemed to be no seat for me, a testament that my calculated risk worked and continues to work. I dreamt of this moment since I was 6. Being born in the Philippines and growing up in Guam, I knew it wouldn’t be easy — yet here I am.

It gives me so much joy to share this honor with my friend Laverne Cox (Orange Is the New Black), nominated in the outstanding guest actress category for the third year in a row. I texted her about my nomination right after calling my manager, and she truly was just as happy as I was. The Daytime Emmys recently made progress as well. Rowin Amone (King Ester) was nominated for lead actress in a digital daytime drama series, and Scott Turner Schofield (Studio City) became the first transgender man to have snagged a Daytime Emmy nom for guest performer in a digital daytime drama series. 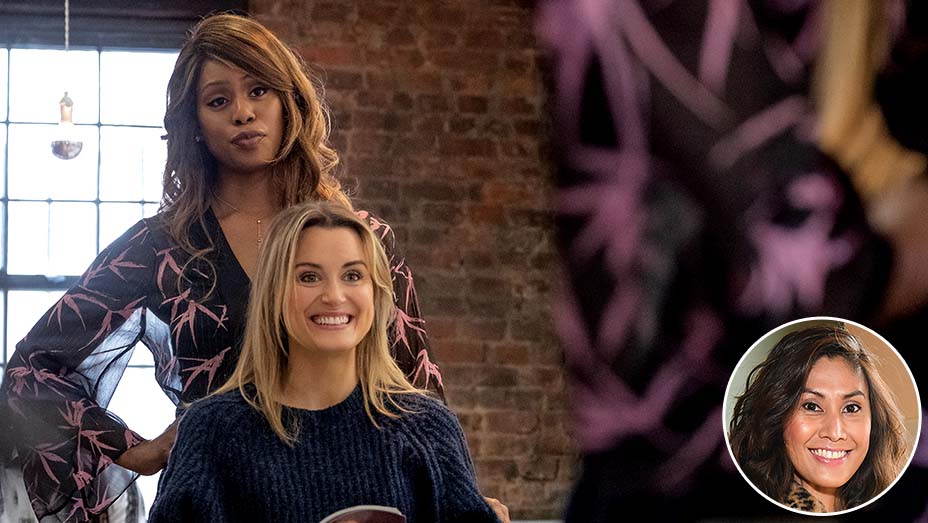 These nominations are an acknowledgment of hard work and talent, but they also mark significant progress in the industry’s validation of our humanity as transgender people. It is baby steps toward a bigger, ideal picture. I created Razor Tongue because I didn’t see anyone like me on TV or in film. The character I play, Belle Jonas, is a fun and complicated woman who happens to be transgender and from Guam. Her story is so much more, and being transgender isn’t the central part of her story but simply one part of who she is. Years and years of hard work in Los Angeles, auditioning for roles that didn’t represent me, made me realize my identity was working against me. There were barely any Filipina Americans working, and transgender people were generally depicted in a negative way. Writing and producing content to star in was a way for me to feed my passion and change the narrative.

My Emmy category is an upstart category that has been around for only a few years. It allows this specific awards institution to reflect more closely on what is populating screens today. Hollywood is definitely changing, and I feel it. Perhaps not fast enough, but the movement continues to progress. Social media was quick to name me the second transgender actor to be nominated in the Primetime Emmy acting category and the first Filipina American transgender woman ever. While I’m not mad about any of it, for me it’s not about being the first or the only. It is about pushing through and recognizing the growing movement trans artists created before me.

As an Asian American transgender woman, I’d be remiss in not mentioning that I have more privilege than my Black trans sisters, who continue to face extremely high rates of violence and discrimination. This year has already seen at least 25 transgender or gender nonconforming people killed.

TV and film have the power to shape cultural norms, behavior and perspective, and I will use my platform and the privilege I earn to speak on my purpose, to change the narrative to be more equity-centered. I built my own table and proved what my community and I are capable of. I am grateful to the TV Academy for inviting me to have a seat at the party.