You might want to do a bit of homework before seeing the Broadway revival of Travesties. Perhaps a little digging into the history of the Russian Revolution and the reasons for the first world war. Then you should refresh your memory of the early 20th century avant-garde art movement known as Dadaism. A rereading of Oscar Wilde’s The Importance of Being Earnest is a must. And if you have the time, finally finishing James Joyce’s Ulysses wouldn’t hurt.

If all that sounds a bit daunting, worry not. You don’t have to enroll for a graduate degree to enjoy Tom Stoppard’s simultaneously wacky and intellectual 1974 comedy, now being given its first-ever Broadway revival by the Roundabout Theater Company. That’s largely due to the accessible nature of director Patrick Marber’s rollickingly staged production, which garnered raves for its London stints at the Menier Chocolate Factory and the West End. The handy crib sheet provided in the program doesn’t hurt, either.

The set itself announces just how heavily the play will draw on literary references. It’s a cross between a library and a drawing room brimming with stacks of books and sheets of paper that litter the stage like confetti. The evening is structured as a memory play narrated by an elderly, low-level British servant, Henry Carr (Tom Hollander, TV’s The Night Manager), recalling his experiences 50 years earlier in 1917 Zurich. 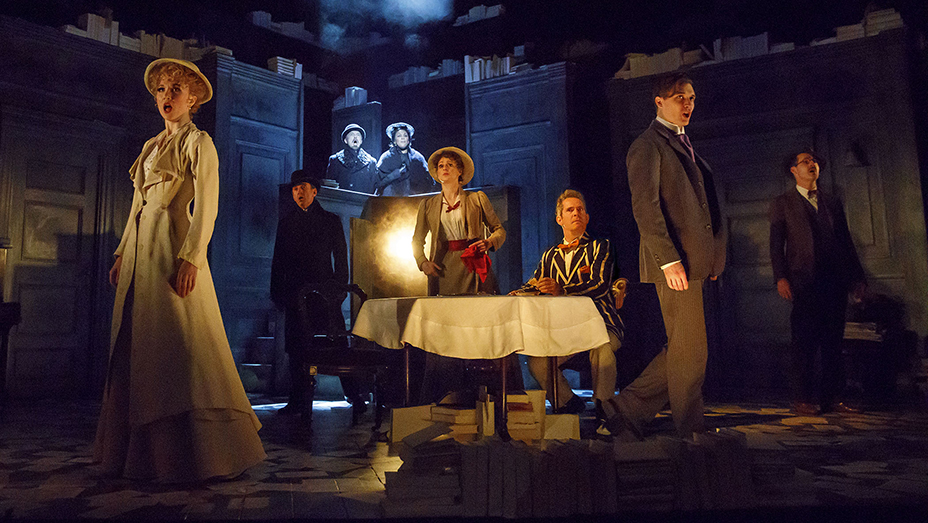 It was in the Swiss city that he encountered such seminal figures as artist Tristan Tzara (Seth Numrich), writer James Joyce (Peter McDonald) and Russian revolutionary Vladimir Lenin (Dan Butler). Each of these estimable figures, you’ll be relieved to learn, turns out to be quite the cut-up. At one point, Lenin even provides lute accompaniment to a recitation of a Shakespearean sonnet. Yes, it’s that kind of play.

The plot, which eventually transforms into a parody of Oscar Wilde’s 1895 classic comedy, is nothing more than a springboard for the playwright’s unique brand of clever wordplay and cerebral observations about art, politics, morality and pretty much everything else under the sun. The dense verbiage is presented through a prism of exuberant physical comedy and absurdism — it’s like watching an advanced university course taught by the Marx Brothers and punctuated by British music hall-style song-and-dance numbers.

Travesties is not a play to see when you’re tired or digesting a heavy meal and several glasses of wine. Simply keeping up with its dizzying braininess admittedly can be exhausting, especially with its daunting two-and-a-half-hour running time. At one point, Carr says about one of his arguments, “It may be nonsense, but at least it is clever nonsense,” to which Tzara replies, “I am sick of cleverness.” You might occasionally sympathize. 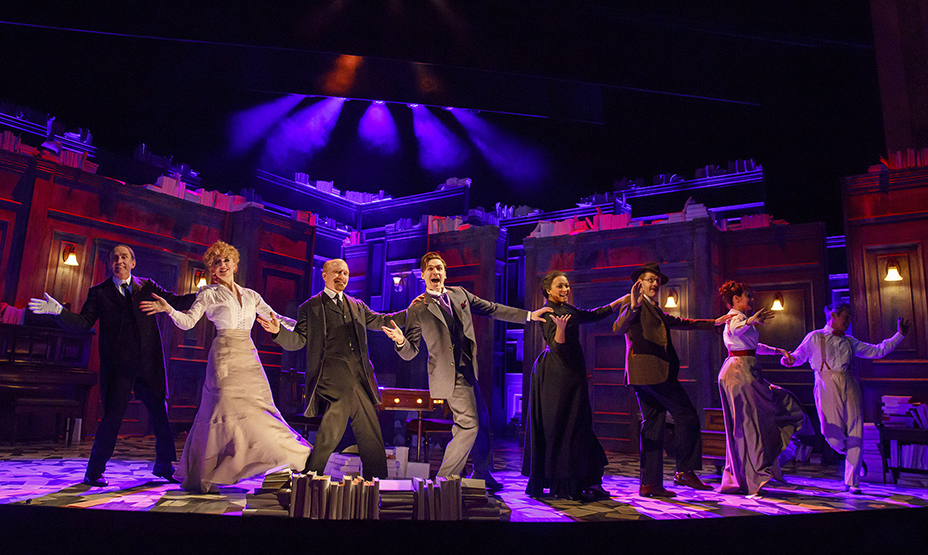 But when the play soars, it really soars. It’s practically worth the price of admission to hear Wilde labeled as a “Gomorrahist.” Or Carr considering a social revolution to be on the order of “unaccompanied women smoking at the opera.” Or the description of Dadaism as a “historical halfway house between Futurism and Surrealism.” Or the observation that “there was nothing wrong with Lenin except his politics.”

Luckily for us, Stoppard isn’t above being silly for silliness’ sake. You get the feeling the playwright chose Tzara as a character not only for historical accuracy but also because it provided the opportunity for the word “Dada!” to be repeatedly shouted with abandon. At the same time, much seriousness underlies the humor; the playwright cannily makes his deeper philosophical points in a way that helps the medicine go down.

Marber, a prominent dramatist himself (Closer, After Miss Julie, Dealer’s Choice), clearly has an affinity for the play, his joy at staging it practically bounding across the footlights. Hollander, repeating his Olivier-nominated performance, delivers a virtuoso turn as the hapless Carr, and McDonald, another London transfer, makes for a droll, limerick-spouting Joyce. Numrich’s Tzara proves hilariously physically and verbally manic; Butler garners laughs with his sly underplaying as Lenin; Patrick Kerr is a hoot as a haughty butler, and Scarlett Strallen and Sara Topham are delightful as Gwendolen and Cecily, the latter getting the opportunity to strut her stuff in a sexy dance number.

Don’t feel bad if you struggle at times to keep up with the frantically paced proceedings. You may miss a plot point here or a reference there, but you can count on a belly laugh waiting around the corner.