“Such a nasty man,” says a female Trump-like figure in Her Opponent, the gender-swapped staging of the 2016 presidential debates.

“The public has had decades of exposure to these two candidates,” says director Joe Salvatore, an NYU theater professor who created the show with Maria Guadalupe, an economics and political science professor at INSEAD. “We’re experiencing the words, gestures and movements of these two people replayed verbatim, but we see them without the biases we have toward Trump or Clinton, or men and women altogether.” 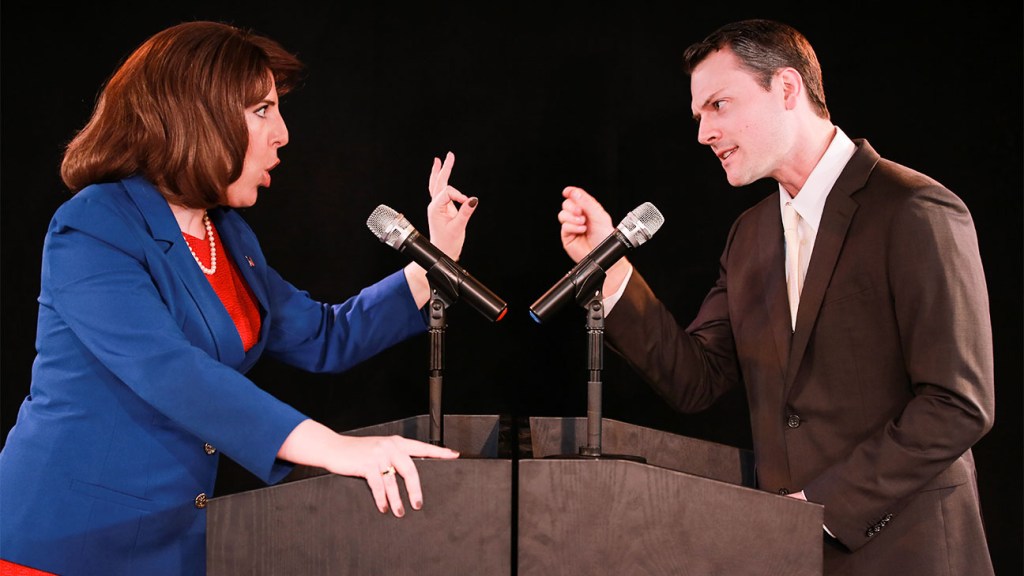 The two creators are admittedly liberal and expected the project to reinforce the shock they experienced on election night — “I was struck by the aggressive body language that Trump was using and thought it would never be tolerated by a woman,” recalls Guadalupe of the debates — but found themselves understanding how the outspoken businessman and reality TV star won the presidency. After each performance, Salvatore conducts a discussion with the audience, who generally dislike the male Clinton character’s mansplained fact flood and “all the nodding and smiling that a woman needs to do to be listened to,” says Guadalupe, and favor the female Trump character’s visible passion and clear messaging.

“My mother, who voted for Trump, said it helped her realize that she made the right decision,” admits Salvatore. “I’ve learned that what people say is important, and how people say it is just as important. It’s not that I suddenly think Donald Trump is the right choice, but I feel like I have a better understanding of how he arrived into this position.”

Still, the social experiment is staged with unison in mind. “This is not a play that talks about the policies — you can still say they’re good or bad or awful or terrible, based on what I see happening — and the fact that it’s from a more likable character doesn’t take away from the content,” says Guadalupe. “We all want the U.S. to be a better country and the world to be a better place, and this allows you to rethink your biases on politics and gender and move the ball a little further, I’d be very content with the outcome.”

Invitations to an upcoming performance are being sent to New York Governor Andrew Cuomo, senators Kirsten Gillibrand and Chuck Schumer, and Mayor Bill de Blasio. The creators would also love to have Clinton herself in the audience (“I don’t know how she’d feel about it, but she’s a strong woman,” says Guadalupe), as well as Alec Baldwin and Kate McKinnon of Saturday Night Live. “They’re operating under satire, but it’d be great to hear their reaction because they know these people quite well,” says Salvatore. But more importantly, he invites pundits to attend the show to start a discussion about gender perception in business and politics. They’re also open to staging it beyond New York or Los Angeles: “There are places in the middle of the country that are not on the coasts that we would benefit from hearing those places respond to it, places where the audiences are not so apt to be liberal,” says Salvatore.

Her Opponent plays Wednesday at 8 p.m. and Saturdays at 5 p.m. at the Theater Center in New York City.