A new report examining the portrayal of immigrant characters and storylines on television has found that the industry still has a long way to go. In partnership with the Norman Lear Center at USC Annenberg, leading non-profit media advocacy organization Define American released its second-annual “Change the Narrative, Change the World” report. This year’s study found that while immigrant portrayals on TV have improved marginally since 2018, there’s still significant work to be done to achieve more accurate onscreen representation.

The new report analyzed 129 unique immigrant characters across 97 episodes of 59 scripted TV shows that aired broadcast, cable, and streaming platforms between August 2018 and July 2019. One of its major findings was that undocumented immigrants continue to be heavily associated with crime on TV, with 22 percent of immigrant characters affiliated with a crime of some sort (yet 2018 studies by the CATO Institute and the Marshall Project have found that both undocumented populations and immigrants in general commit less crime than native-born Americans.) However, that percentage has declined from around a third in 2018, at least representing a move away from the negative stereotype.

Among the report’s other findings were that about half of immigrant characters had an accent, substantial drop from 2018 when 77 percent of those characters did. Immigrants that are Asian/Pacific Islander (API), Black, female or older in age continue to be underrepresented onscreen, while Middle Eastern/Muslim characters are overrepresented, relative to actual statistics. And while the number of LGBTQ immigrant characters was consistent with reality, there were no transgender immigrant characters onscreen for the second year in a row.

“I still find it disappointing that for the second straight year, specific at-risk immigrant communities were largely invisible, including those with disabilities, transgender immigrants, and undocumented Black immigrants,” says Define American founder Jose Antonio Vargas, noting that API representation in particular declined 4 percent from 2018 when in reality they compromise more than a quarter of the U.S. immigrant population.

As for a bit of good news, the report also surveyed 940 Americans and found that people who watch immigrant-focused storylines on shows like Orange Is The New Black, Superstore and Madam Secretary are more likely to take action on immigrant-related issues. The more viewers watched shows featuring immigrant characters, the more they agreed that the U.S. should welcome more immigrants. Viewers exposed to immigrant storylines also showed more inclusive attitudes toward immigrants (i.e. comfort meeting undocumented people, opposition to charging undocumented immigrant parents as criminals and support of higher levels of immigration.)

“This underscores that the media we consume matters and has a real, measurable effect on how immigrants are perceived in this country,” says Vargas. “By harnessing the power of entertainment, we can engage audience members, empower them to take action on immigration-related issues, and inspire a cultural redefinition of what it means to be American.” 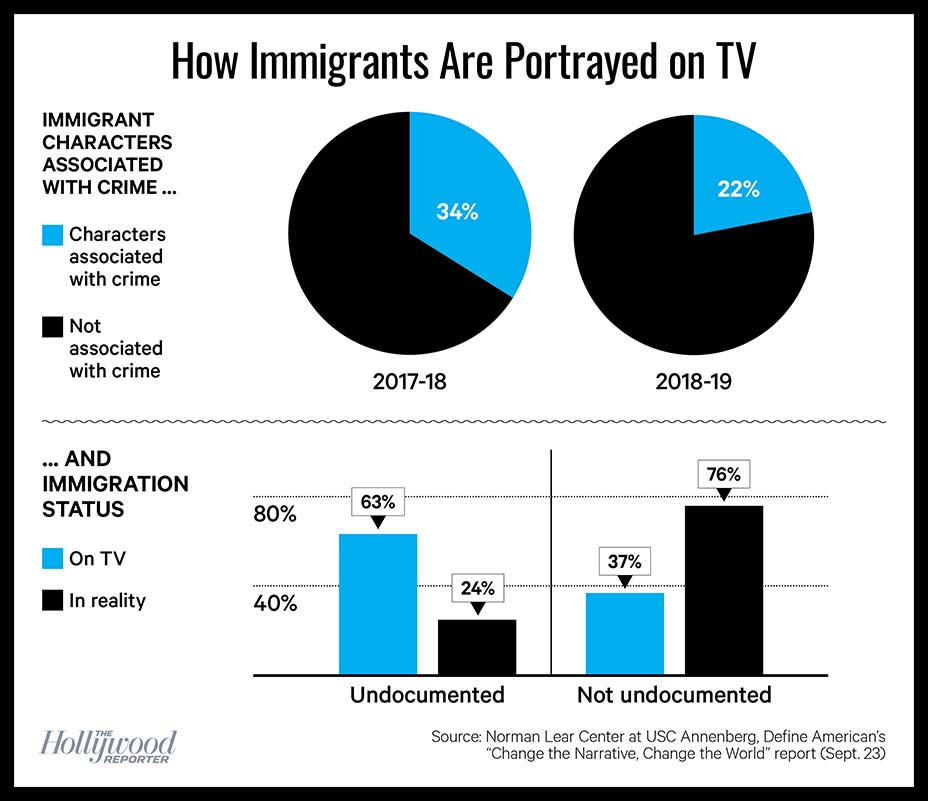 A version of this story first appeared in the Sept. 23 issue of The Hollywood Reporter magazine. Click here to subscribe.