Rose McGowan had a hold placed on her Twitter account Wednesday night, an act that quickly sparked outrage among the many users who have been following her posts ever since news first broke of the allegations against Harvey Weinstein.

The actress, who has emerged as a Hollywood voice after finding herself thrust into the center of the developing story of sexual misconduct, harassment and assault allegations against the movie mogul, took to her Instagram and Facebook accounts to relay the news of her temporary suspension, writing cryptically that “TWITTER HAS SUSPENDED ME. THERE ARE POWERFUL FORCES AT WORK. BE MY VOICE. #ROSEARMY.”

She added a screenshot (below) from a message from Twitter telling her that she had violated their terms of service and that she would be locked out for 12 hours once she deleted certain tweets. She posted the message late Wednesday night.

As of 7:20 a.m. PT on Thursday, Twitter had unlocked McGowan’s account, telling THR the temporary lock was due to the actress tweeting out a private number, which falls under the private information violation under Twitter Rules. McGowan deleted the post to regain access.

“We have been in touch with Ms. McGowan’s team,” Twitter’s chief spokesperson, Kristin Binns, said in a statement. “We want to explain that her account was temporarily locked because one of her tweets included a private phone number, which violates our Terms of Service. The tweet was removed, and her account has been unlocked.”

Binns added, “We will be clearer about these policies and decisions in the future. Twitter is proud to empower and support the voices on our platform, especially those that speak truth to power. We stand with the brave women and men who use Twitter to share their stories and will work hard every day to improve our processes to protect those voices.”

“When will nuclear war violate your terms of service?” she tweeted. 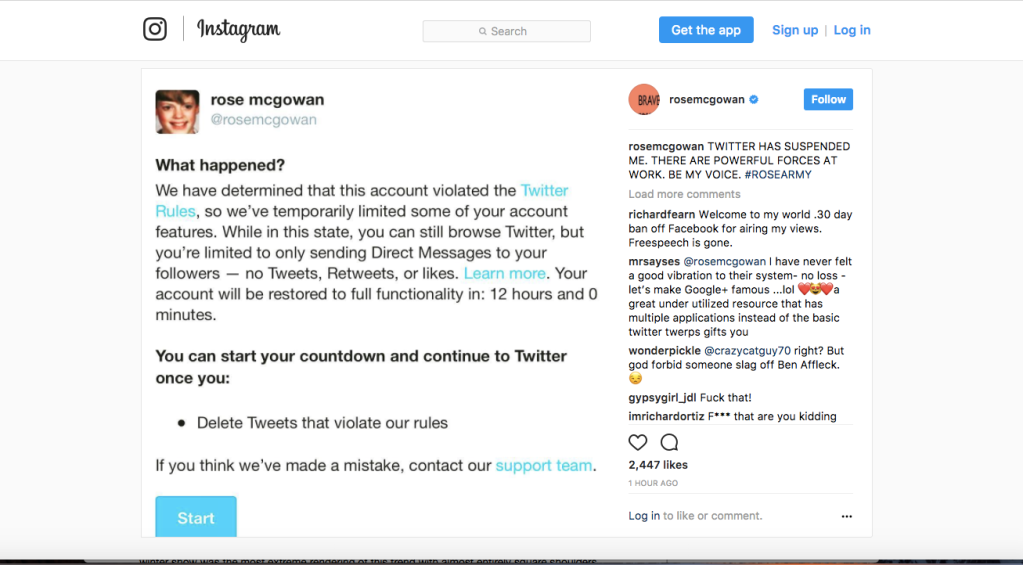 Since the bombshell accusations, including multiple rape allegations, about Weinstein were first reported by the New York Times and The New Yorker, McGowan has used Twitter to excoriate the disgraced producer, as well as board members of The Weinstein Co., including co-founder Bob Weinstein. She had also condemned a number of prominent actors, such as Ben Affleck and other “A-list golden boys” whom she feels were aware of what was going on. McGowan specifically accused Affleck of lying after he released a statement about Weinstein, a charge the actor has not since commented on, and tweeted that he should “fuck off.”

Later on Thursday, after regaining control of her account, McGowan confirmed to THR that a tweet claiming “HW raped me” was indeed about Weinstein.

The Times first reported that McGowan reached a $100,000 settlement with Weinstein after an encounter in a hotel room at the Sundance Film Festival in 1997. McGowan did not participate in the Times exposé but quickly called on the entire TWC board to resign and for Hollywood actors and actresses to speak up. “Men in Hollywood need to change ASAP,” McGowan told THR in an interview over the weekend. “Hollywood’s power is dying because society has changed and grown, and yet Hollywood male behavior has not.”

On Thursday, police in New York and London confirmed they were investigating Weinstein for sexual assault. McGowan had previously revealed that she was a survivor of rape and that her assault was perpetrated by a powerful studio boss, though she never identified the person. On Thursday, she had no additional comment beyond confirming Weinstein was the target of her tweet.

News of McGowan’s temporary Twitter suspension had caused a storm of protest on Twitter overnight, and her name remained a Twitter trending topic well into Thursday morning. Many users were quick to point out that white supremacists and even President Donald Trump could consistently provoke outrage and not have their accounts called into question — assuming McGowan had been flagged for a Weinstein-related post. Hollywood voices, from Patricia Arquette to Jeffrey Wright, also lent themselves to the outrage. Prolific producer Judd Apatow said simply, “But Trump can threaten war.”

Jessica Chastain, who has also been vocal in condemning Weinstein as well as supporting the women who continue to speak out, called on Twitter to be transparent with its rules. “Hey @Twitter let us know which of these rules @rosemcgowan broke. Asking for multiple victims of sexual violence,” she wrote. Many others called on both Twitter and its CEO, Jack Dorsey, for an explanation.

Twitter also posted its explanation as to what happened on its @TwitterSafety handle.

When a user violates the Twitter Rules — which range from harassment to hateful conduct and are listed on the social media platform’s website — the account is temporarily locked and the user will be asked to complete certain actions before the limited-state countdown begins, including deleting the tweets that violate the rules.

See some of the reactions below.

Hey @Twitter let us know which of these rules @rosemcgowan broke. Asking for multiple victims of sexual violence. https://t.co/eiZjQeMAVg

@rosemcgowan ‘s twitter account has been suspended. I expect to start seeing smear stories on her anytime now. This is the sad reality.

Wow, @Twitter, seriously? THIS is the account you suspend but not Trump who threatened to wipe out another country? Suspend me too, please. https://t.co/ZHhvIkfEcN

And now THIS? You allow Twitter freedom to our president but you silence a woman speaking out about sexual harassment? @rosemcgowan

Wtf @Twitter @jack? My timeline is inundated with heinously offensive bots daily and this is the account you suspend? I need an explanation. https://t.co/uHrwyl7ZGp

But Trump can threaten war. https://t.co/yTVRq7dv6e

So let me get this straight: Rose McGowan gets suspended but @twitter is fine with neo-nazis continuing to hate mob? https://t.co/NGL16mm3ZQ