“Cannabis is the new gold rush!” veteran hotelier Roger Bloss, a partner in eight large 420-friendly developments in California and throughout the U.S, tells The Hollywood Reporter.

The cannabis industry has made headlines with many firsts in California, from Lowell Café (the original THC smokery and eatery in the U.S. that opened in West Hollywood on Oct. 1) to a hipster art gallery-dispensary-retail emporium in downtown Los Angeles from lifestyle cannabis brand Stiiizy, which debuted in August. For those who imbibe and don’t like to drive, the obvious next step is cannabis hotels.

THR has learned about multiple cannabis hotel projects underway throughout the U.S., including two in the Coachella Valley — Coachill Inn Resort and amphitheater in Desert Hot Springs from Bloss and The Grape House, a luxury boutique hotel in Palm Springs from Chris Santos (founder of the now-defunct fashion label MyVice Sweats, worn by Justin Bieber and NBA stars Kevin Durant and Blake Griffin) with business partner Neran Dhas (a partner in the Kickballers streetwear and sneakers store that opened in Washington, D.C., in 2007 and has since shuttered). 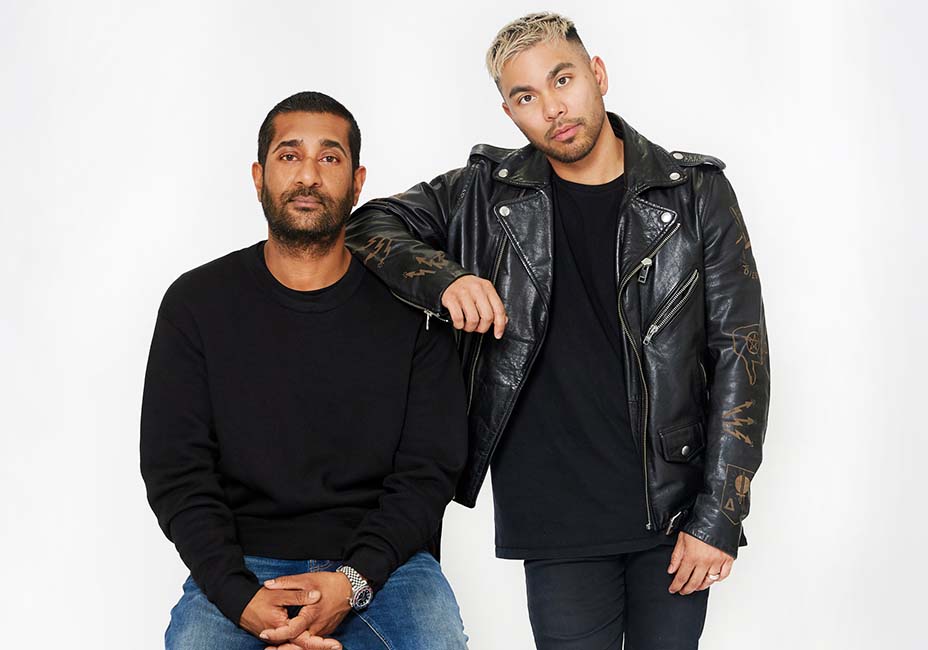 That project will be immediately followed by an adjoining boutique hotel, due to be completed in 2023 or early 2024. “In hotels, the space that is typically the bar space can now be used to enjoy the consumption of cannabis,” says Dhas. Two things that set this hotel development apart are the sleek, minimalist design by internationally renowned architect Dan Brunn and a pairings menu-hospitality plan created by Michelin-starred San Francisco restaurateur Kristopher Esqueda (who was behind Saison, Vinyl, Huxley and Matador).

Brunn told THR that the hotel is “a fresh and inviting design outlook into cannabis lifestyle,” adding, “The architecture for this warm, yet brisk cannabis destination will be inspired by the mystique nature of the California desert. We wanted to rethink what has already been defined in the initial rush into this booming market. Guests will encounter design that reimagines the line between interior and exterior, and a space that plays with the tension of light and shadow. The palette of materials, such as white terrazzo, natural oak and a spiral staircase of brushed bronze tie in the ephemeral space, all the while natural light basks the tall space.”

As for the company name, Santos compares a cluster of grapes to a nug of cannabis. Bloss tossed out a similar comparison, saying, “Take the coolest, most savvy wine tour company and exchange the word ‘cannabis’ and that’s what I’m doing. I look at wine as my equivalent.”

Alternative Hospitality was quietly launched last year by the 63-year-old Bloss, who sold his franchisor Vantage Hospitality Group to Red Lion Hotel Corps in 2016 for $23 million cash and 690 shares of company stock. After experiencing a heart attack and a near-deadly car crash, Bloss told THR that he swapped out prescription drugs for cannabis to help alleviate chronic pain, which led to his current venture.

Part of a mammoth 160-acre Coachillin Canna-Business Park and cannabis cultivation center in Desert Hot Springs, said to be the largest in North America and currently under construction, the 154-room cannabis-oriented Coachill Inn Resort hotel, spa, restaurant, fitness center and 2,000-seat amphitheater (catering to the Coachella Valley entertainment, sports and festival circuit) is slated to open in time for New Year’s Eve 2020. The hotel-amphitheater facilities will be operated by Bloss in a land ownership partnership with Kenny Dickerson, who owns the entire park project and also heads up sustainable “green” construction firm EcoMaster, contracted to build the hotel. The project is also a division of Las Vegas-based MJ Holdings (a publicly traded cannabis holding company offering seed-to-sale services), of which Bloss is an investor and board member. 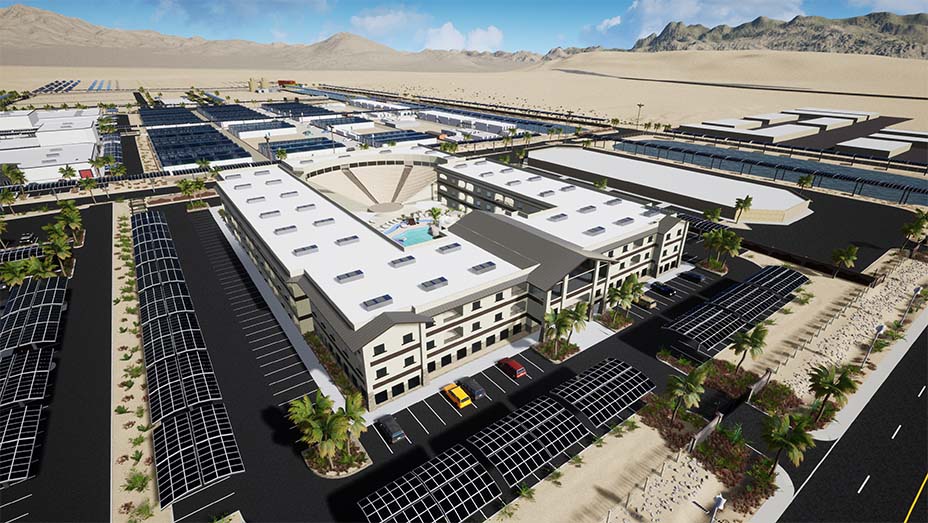 Members of the Dickerson family declined to speak to THR. “We haven’t done advertising because we’re deliberately flying under the radar,” Katherine Dickerson, chief operations officer at Rancho Mirage-based Coachillin Holdings LLC and daughter of Kenny Dickerson, said in an email response.

The 160-acre eco-friendly cannabis development (including greenhouses, currently on site, as well as research facilities) is secured around the clock by “retired military security experts entrusted with the protection of U.S. embassies around the world,” according to the website. “And Michael Dickerson [son of Kenny Dickerson, also working in the business] has tech drones, so if someone tries to fly a drone over, they’ll shoot it down,” says Bloss. “Their technology and growing methods are so proprietary and state of the art. … We have to wear hazmat suits when we go out to see the plants. [To put the value of cannabis in perspective] I’ve had friends who have lost $20 million to $30 million crops!”

Estimated room rates at Coachill Inn Resort will range from a very affordable $150 for a standard room (“priced below market, assuming guests will spend on products and services,” says Bloss) to $2,500 for the top-floor suite attached to a glass-encased private party lounge with a hot springs “river” running through. 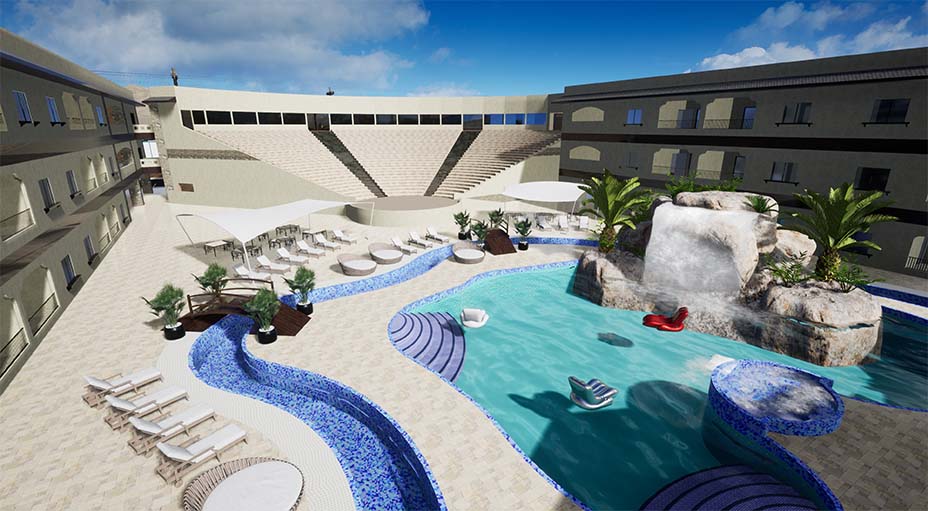 “It will be upper midscale; 3.5 diamond quality and price; 4-star service and cleanliness,” says Bloss, adding that David Wallace of Florida-based DLW Architects designed the hotel. “It’s all about personal service and interaction. There is no front desk; it’s all going to be digital and iPads. We will have robots delivering to rooms and electric vehicles to use. In this day and age, if you’re not tech-savvy, why bother?” A clubby atmosphere is another focus. A block of rooms will be set aside during key events for frequent-stay VIP guests, who will have access to priority last-minute bookings.

Focused on health and wellness, the property will have each guest indicate health issues they would like to address, from sleep to back aches, in advance; upon arrival, a concierge will offer courtesy samples of hemp and CBD products as medicinal treatments. Products can also be shipped to guests after their stay. (“Next time you have an issue with your back or your sleep, who are you going to call?” adds Bloss). Guest rooms, pool and spa tap into the Desert Hot Springs natural mineral water. And there are plans for hemp furniture and uniforms, hemp embedded in the concrete and hemp cigarettes sold in a hotel retail shop, along with hemp- and CBD-infused products such as body lotions, gummies and tinctures, with sample sizes stocked in the guest rooms.

“We’re even going to shape the hot tub like a cannabis leaf, so each leaf is a private section,” says Bloss. “An upscale sports complex will include golf swing suites, tennis, basketball, pickleball and more. I’m working with chefs and spa operators to create recipes and treatments and exploring it from the regulatory side, the consumer side, and the production side. The hottest trend is bars, lounges and nightclubs that don’t have alcohol. So we are looking at mocktails infused with plants that are unique and healthy, yet create that social lounge-bar atmosphere.” Planned spa treatments include CBD infusions, oxygen therapy, and IV drips. “And guests can pop next door and add in cannabis,” he says.

That said, the hotel will focus on CBD and hemp, so as not to compete with the adjacent retail cannabis dispensary in the park with “in-house doctors offering medical consultations,” according to the Coachillin website, and a private members-only club and lounge on the second floor. Bloss says that he may eventually add a smoking lounge to the hotel and, until then, guests can smoke in many designated areas in the park.

In total, eight cannabis-centric hotel locations are in the works, with the next property to debut in Las Vegas, according to Bloss, followed by Northern California and Colorado (all in partnership with the Dickersons) as well as projects in Maryland, Michigan and Oklahoma.

“I will probably come to L.A. when your prices come down,” says Bloss. “The other problem in California is that you’ve got the best black market in the world for cannabis and the most licenses and distribution of anybody in the country. So it’s a tough market from the cannabis side, but it’s a great market from the consumer side!”

The plan is forward-thinking in terms of the cannabis world to come. “The idea is that it’s not a hotel — it’s a health and wellness resort to go to for years down the road,” says Bloss. ”Federal legalization is going to happen in my lifetime, well before my 30-year mortgage is over.”

This story appears in the Nov. 6 issue of The Hollywood Reporter magazine. To receive the magazine, click here to subscribe.