After serving as head writers on Saturday Night Live in 2016-17, Chris Kelly and Sarah Schneider are embracing the politics-free zone of their half-hour Comedy Central series, The Other Two. The scripted comedy tells the story of 30-something siblings, Brooke (Heléne York) and Cary Dubek (Drew Tarver), and how the overnight superstardom of their teenage brother — YouTube musician “ChaseDreams” (Case Walker) — affects their floundering lives and showbiz careers.

Kelly and Schneider, both 35, who wrote on SNL for six seasons, spoke with THR about their transition from sketch writing to scripted comedy and the process of creating a fictional pop star and his accompanying music.

What was the first kernel of the idea for this show?

SARAH SCHNEIDER Chris and I had talked for a while about doing something narrative, and we just kept kicking around ideas. Nothing was really sticking, but we knew we wanted to tell grounded stories about these two siblings, a boy and a girl, in their late 20s, early 30s, living in New York.

CHRIS KELLY The core idea is comparing yourself to other people. When you’re in a creative field, you always wonder if you’re doing well enough or well enough fast enough. So, we just thought who would be the worst, most infuriating person to compare yourself to, and we thought your little brother becoming super famous out of nowhere would be the worst possible scenario.

The two of you became head writers of SNL in 2016 after writing there for six years. Did the 2016 election play a role in the creation of this show and your eventual departure from SNL in early 2018?

KELLY We were already planning on leaving SNL. It’s not like Trump won and we were like, “Enough! We can’t do this anymore.” We had already written this pilot and were in the middle of selling it during that time, so we knew that was going to be our last season. That being said, it was a happy accident that we got to go to this show that was politics-free. While our show touches on pop culture, we don’t deal with the president, and that has been nice. We liked writing sillier stuff at SNL, but when the election came around, especially because we were head writers, we had to pivot to all politics, all the time. Growing up, I had always imagined writing at SNL during election season, and I loved it in the moment, but now, it’s fun to do the opposite.

Did it take a little while to adjust to writing scenes versus sketches?

SCHNEIDER Definitely. Ken Marino’s and Richard Kind’s characters are a little bit “sketchier.” We could go a little bigger and broader with some of them, but our main two characters, Brooke and Cary, are a little more grounded, so we definitely have to make sure that we’re not going too sketchy with them. They’re such funny actors, and they can play grounded just as well as they can play big and comedic.

KELLY On the flip side, weirdly, when we were at SNL, sometimes we thought our sketch ideas were too sad, dramatic and quiet. (Laughs.) A lot of our favorite ideas were little short films or slices of life, as opposed to a hard, laugh-out-loud sketch. So we’ve actually put some of those ideas in the show.

Given that SNL is a stomping ground for stars, do some of your plot points or jokes originate from observations or gossip you’ve come across in your careers?

SCHNEIDER One of our major takeaways was that we got to see a lot of the work behind the artist or actor when they’d come to SNL. They’d have a whole team with them, and sometimes, with younger stars, you’d see four or five men making decisions for them. We always thought that was so interesting because there was this perfectly manicured, perfectly created pop star or personality put out into the world. We tried to satirize a lot of that with Wanda Sykes’ and Ken Marino’s characters.

KELLY We would also pull from what it was like to be a writer on SNL, as opposed to a castmember. Going to the Emmys with our friends Kate McKinnon and Aidy Bryant, when they’re on the red carpet, the writers are scuttled to a smaller red carpet where there’s no press. One year, we had to step over vomit.

How did Comedy Central react to the heavier themes of this show — such as grief and sexual identity?

KELLY If anything, their most common note was making sure that the show feels grounded, which is what we always wanted. They never shied away from sexuality or the darkness of the music industry. They always said to go further and keep exploring that. None of us wanted to make a silly, wacky show. 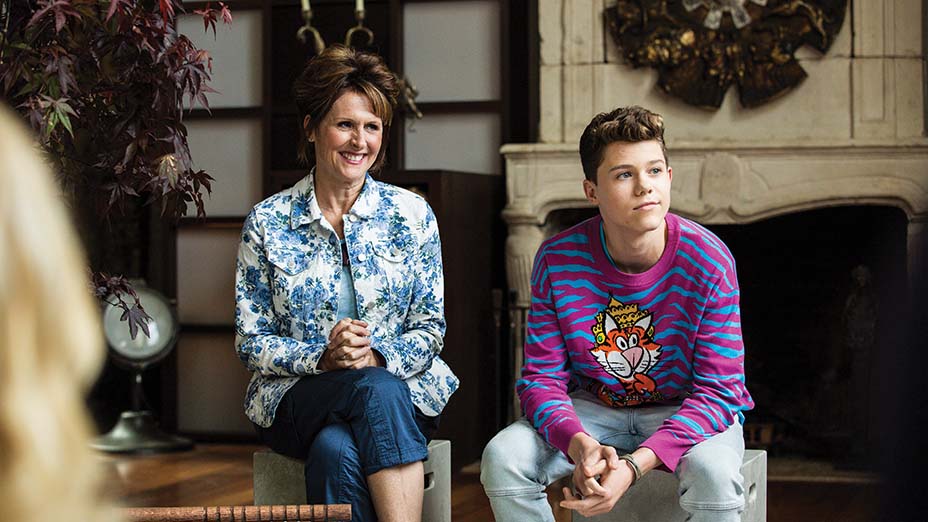 What is the process of writing Chase’s music, and are you at all concerned about his music becoming popular outside the show?

KELLY (Laughs.) We were terrified that it would happen.

SCHNEIDER We really wanted the first song to feel like a homemade, first-video-on-YouTube song. We wrote the lyrics, and Vanacore Music wrote the music. For the other two songs, we collaborated with a songwriter named Brett McLaughlin [aka Leland]. He’s one of Troye Sivan’s songwriters, and he’s written for Demi Lovato and Ariana Grande. So we knew we wanted a song to be called “My Brother’s Gay and That’s Okay!” and that the vibe should be like a Macklemore “One Love” or a Christina Aguilera “Beautiful.”

Are Brooke and Cary proxies for the two of you in some ways?

SCHNEIDER In a way, they are, but not in the way you’d think. We both have seen ourselves in both characters, just in terms of how they’ve interacted with the world around them, how they’ve compared themselves to others and how they’ve felt panicked about where they’re at in their lives and if they’re on the right path or not. Chris and I can relate to all those emotions.

KELLY Obviously, a lot of the stuff with sexuality is stuff I’ve gone through and was interesting to me. So moments are ripped from the headlines, but others are just amalgamations of both of us.

You have a number of running gags that involve Richard Kind, Billy Eichner, Justin Theroux and Patrick Wilson’s cousin. Was Patrick Wilson confirmed to appear before you started the gag?

KELLY We had the idea of a celebrity, but we weren’t sure who would want to do it. Patrick Wilson was a person we wanted for it immediately, but we didn’t want to presume. Patrick appears in episode six and Cary mentions “Patrick Wilson’s cousin” in episode two, but you’ll notice that Cary’s mouth is not on camera. So, we ADR-ed that line once we knew Patrick was set to appear.

The show was renewed for season two. When you were picked up to series, did you have a general outline for future seasons?

SCHNEIDER No, we just did a detailed pitch outline for the first season, where we had a couple of episode ideas ready to go. We did not have season two stuff yet, and we’re still figuring that out now.