The 2018 Winter Olympics officially kicked off with a dramatic and relatively controversy-free opening ceremony in Pyeongchang, South Korea.

The pre-event talk was dominated by the attendance of a delegation from North Korea, led by leader Kim Jong-un’s sister Kim Yo-jong. She became the first member of North Korea’s ruling family to visit the South since the 1950-53 Korean War. Kim Yong-nam, North Korea’s ceremonial head of state, was also in attendance.

The ceremony began with the obligatory introduction to Olympic officials and political dignitaries from the host nation, and in a historic and unexpected moment, Kim Yo-jong shook hands with South Korean President Moon Jae-in.

Vice President Mike Pence and his wife, Karen, arrived after the handshakes to represent the United States. They were seated in the same box but a row ahead of Kim Yo-jong, beside the Moons and next to Japanese Prime Minister Shinzo Abe and his wife. The vice president’s office told the Associated Press he did not interact with the North Koreans.

In freezing temperatures that dropped to 27 degrees, the political show of unity from the two Koreas was replicated somewhat in other sections of the opening ceremony. After a spectacular fireworks display, there was a taekwondo demonstration by people from both the North and South.

Later, to a rapturous reception, the athletes for the two Koreas came out to a unified flag and accompanied by “Arirang,” a Korean folk song considered the unofficial anthem of the Koreas. The two flag-bearers were North Korean ice hockey player Hwang Chung-gum and South Korean bobsledder Won Yun-jong.

The athlete’s parade began, as is tradition, with Greece, and the teams came out to a succession of K-pop hits, including Psy’s “Gangnam Style.”

Team USA was led by luge veteran Erin Hamlin, a controversial choice days before the opening ceremony. After the selection process ended in a tie, Hamlin won the prestigious role as flag-bearer after winning a coin toss against the more decorated speed skater Shani Davis. Davis was not pleased about the result and tweeted that he had lost out “dishonorably.”

I am an American and when I won the 1000m in 2010 I became the first American to 2-peat in that event. @TeamUSA dishonorably tossed a coin to decide its 2018 flag bearer. No problem. I can wait until 2022. #BlackHistoryMonth2018 #PyeongChang2018 pic.twitter.com/dsmTtNkhJs 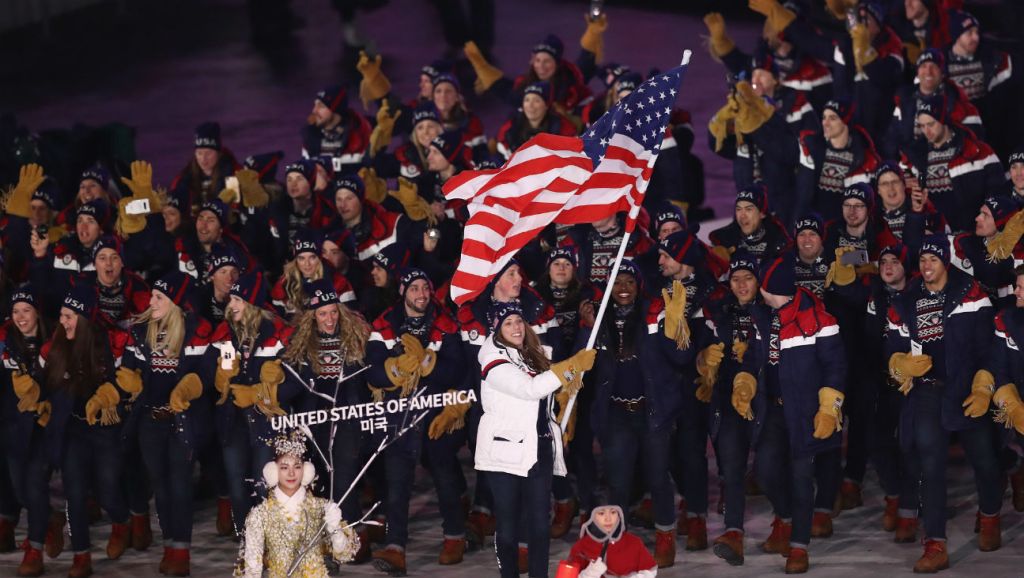 The Pences, who did not stand for the unified Korean team’s entrance, stood only for the U.S. team during the parade of nations.

The ceremony ended with the traditional lighting of the Olympic flame, with a number of Korean athletes carrying the torch in the final legs of the relay. The Olympic cauldron itself, atop one side of the stadium, was lit by gold medal-winning figure skater Yuna Kim. A fireworks display wrapped up the night.

How to Watch the Winter Olympics