When Netflix’s Unbreakable Kimmy Schmidt neared its ending, co-creators Tina Fey and Robert Carlock didn’t want Kimmy’s (Ellie Kemper) story to conclude with a romance. “We definitely were not interested in her arc being toward finding love in the series,” Fey says of Kimmy becoming a successful author. “We wanted her to have the J.K. Rowling triumph.”

But in Netflix’s first interactive comedy special, Kimmy vs. the Reverend, viewers find Kemper’s protagonist, now a best-selling author, planning her wedding to Prince Frederick (Daniel Radcliffe). As she prepares to walk down the aisle, Kimmy also takes on her kidnapper, the Rev. Richard Wayne Gary Wayne (Jon Hamm), which Fey says offers a “movie-scale level of action and drama” while also addressing “something we had left unresolved in the series.”

Fey and Carlock spoke to THR about the interactive special’s challenges, how it fits in with the show’s larger narrative and its subtle connection to their beloved 30 Rock.

Why did you want to explore these particular storylines — Kimmy getting married and confronting the Reverend — through an interactive special?

TINA FEY It felt like, to open up a new chapter, a person that [Kimmy] might find who has a similar weird upbringing would be a royal family member. It seemed like a nice juxtaposition to have the other half be adventure.

ROBERT CARLOCK As we were finishing the series, similar to not wanting to land on some romantic arc but to land on her larger life victory, bringing the Reverend into that would undercut it. We wanted her to feel like, as much as she could, that she had moved on.

How does the special fit in with the narrative of the series? Do you see it as an epilogue or a stand-alone thing?

CARLOCK I think it’s connected to the larger narrative. It gives us an opportunity to tell some stories that didn’t feel like they belonged in the regular series finale — in part because they didn’t feel like they were what we wanted to emphasize, but there are things that we were really glad to get to tackle in her life and have a larger message in the show.

How did you decide which plot points would have viewer options and which ones would be more set in stone? Kimmy’s wedding seems to happen regardless of other choices if you make it to the end.

FEY There are things where you hit dead ends, [or] there’ll be versions where Kimmy doesn’t end up getting married to Frederick and someone else marries Frederick, [and] the technology will kind of push you back and encourage you to keep going and try again. So it’s a little different than [Netflix’s earlier interactive project, Black Mirror‘s] Bandersnatch in that way where Bandersnatch would just end and you’d be like, “Well, that was a creepy ending,” but you’d have no sense of whether it was an intended ending.

CARLOCK We wanted there to be a clear winning ending. Obviously Bandersnatch is a very different tone. And it felt like the wedding was at least a clear announcement of “OK, you did either all or most of this correctly.” 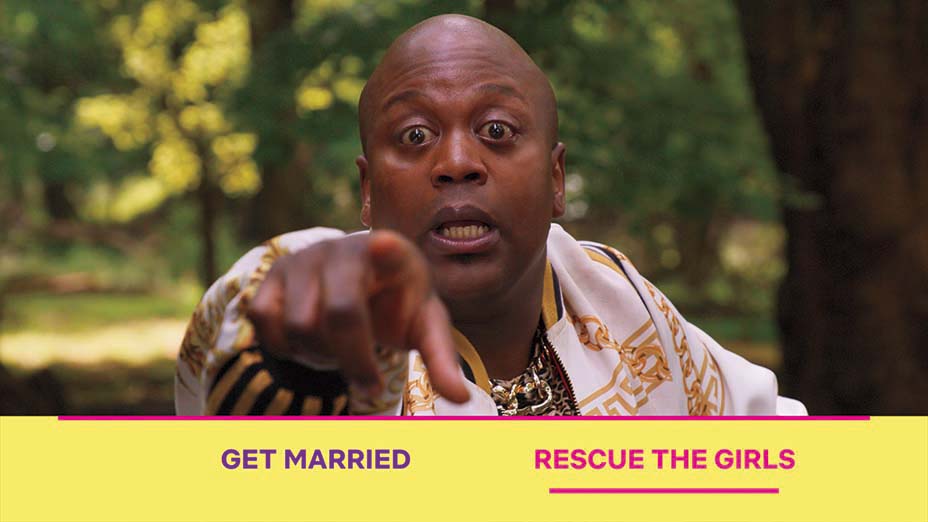 Like the Black Mirror team, you used Netflix’s Branch Manager technology. What were the challenges of using that program, compared to working on the series?

FEY The biggest challenge was continuity — computer programming and continuity.

CARLOCK Fortunately our longtime editor, Kyle Gilman, is a computer programmer and was editing this thing. [He] had to have an understanding of this program, and if he hadn’t been doing that, I don’t know what we would have done.

In terms of the time it took to work on this project, how does that compare to how long you would spend on a season of the show?

CARLOCK What did it turn out to be, Tina, a little over three hours’ worth of stuff?

CARLOCK A hundred-forty-something pages or more.

CARLOCK A lot of people on the ball, but editing it was certainly a very different experience. 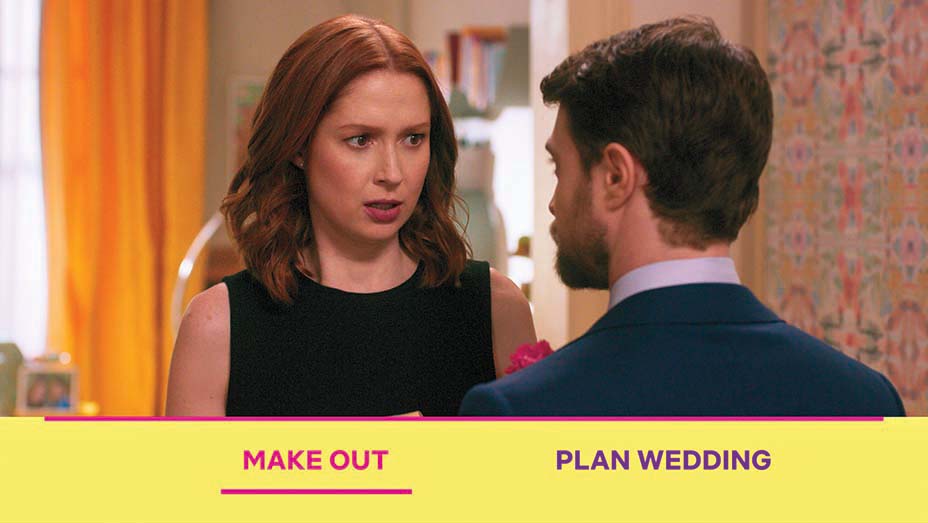 One of the endings involves a college admissions scandal joke with Jacqueline (Jane Krakowski) and Buckley (Tanner Flood). Why poke fun at that?

FEY It just lined up with something that Jacqueline would absolutely have been tempted to do. It was just so character appropriate. And when we were writing, we were probably still in the middle of it.

CARLOCK We were kind of hoping people would want Titus [Tituss Burgess] to go off and do the movie and choose Jacqueline in that moment and have a very early declaration of “Hey, your choices can kill everybody.”

When Kimmy confronts the Reverend, viewers have the option to kill him a few different ways, but anything other than sparing him leads to disaster. Why have things end so poorly if Kimmy kills him?

FEY Kimmy is a kind and naturally moral character. She would not be able to live with herself having committed a murder, no matter who it was.

Is the goal to get viewers to make decisions that the characters would make, especially when it comes to Kimmy?

CARLOCK Because we could have these dead ends and you get to try again, you could let Kimmy act in ways that she [wouldn’t] ordinarily. She can kill someone. She can abandon a baby. She can make out instead of reading a book.

FEY You can scratch the itch of wanting to see her kick the Reverend’s ass.

CARLOCK Then you get to go back and be Kimmy. But ultimately, whether it was for the viewers’ sake or for the characters’ sake, we did want the right path to be making the right Kimmy choices.

Jack McBrayer has a role in the special as a prison guard. You had considered having him make a cameo in the series. Why did you want to use him for the special?

FEY He’s delightful, and would say yes and come and be funny. We basically called in a hit from a friend.

Is the special in the 30 Rock universe? McBrayer plays Sandy Parcell, who has the same last name as his 30 Rock character, Kenneth. And viewers learn that Donna Maria’s (Sol Miranda) company is connected to the Sheinhardt Wig Group.

FEY We fought those connections during the series a lot, and we allowed ourselves to have a couple [in the special].

Do you see these characters coming back for other specials if Netflix is willing?

FEY I would always be happy to revisit these characters. But this does feel like a nice coda to the series, and it feels so in keeping with the silliness of the series — the light and dark mix. 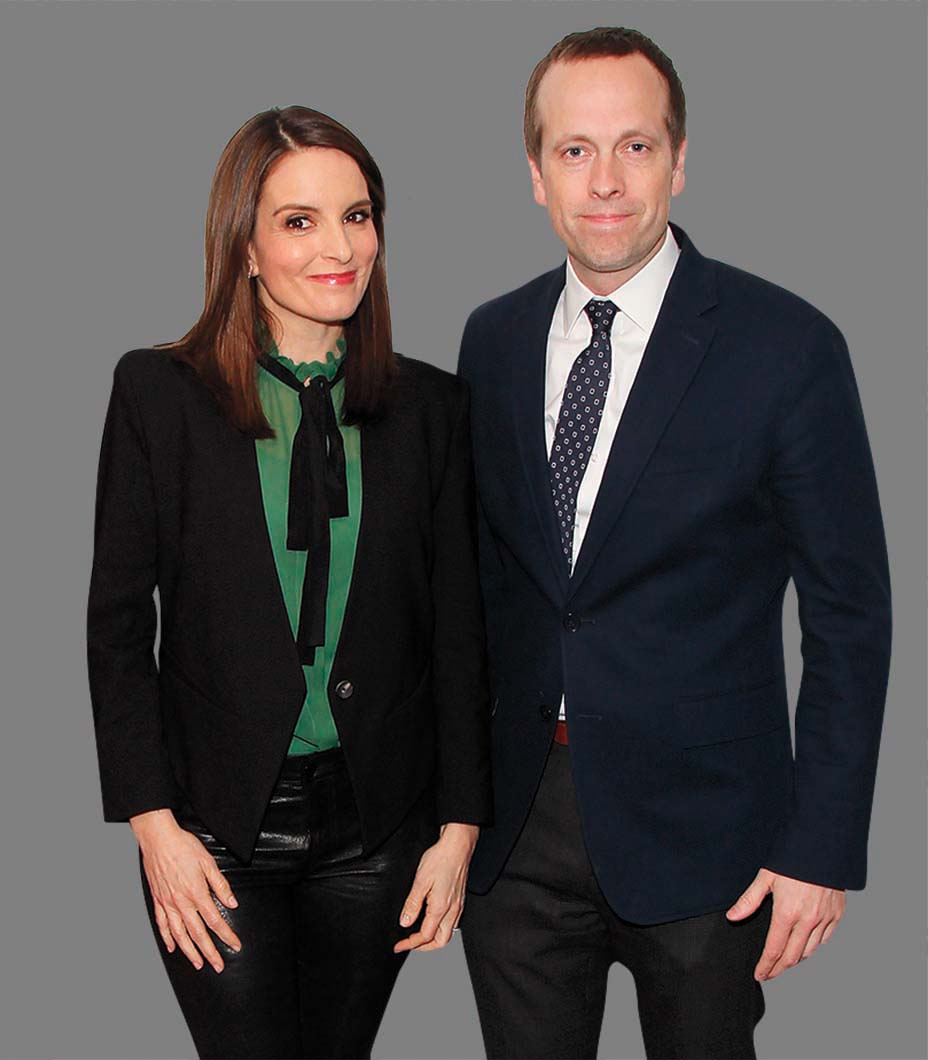 'Bad Education': How Hugh Jackman Brought "Charm" to the Role of a White-Collar Criminal