It was an hour ago, somewhere in Hollywood, about a mile from where she’s standing on this late November Friday night in front of a charming watering hole called The Broadwater Plunge on L.A.’s divey theater row. A freshly lit cigarette in one hand, cellphone in the other, Fox delivers the fender-bender details like a lunch order.

She was posing next to a freeway for a magazine shoot (Carine Roitfeld’s CR Fashion Book) when she saw a male driver unable to avert his gaze from her. “It was crazy traffic, and I was wearing the Gucci with all these slits up here,” she says, waving a hand — the one with the cigarette — in front of her chest, which is now covered in a black Cactus Jack hoodie. She takes a drag and exhales. “He couldn’t stop staring and just slammed into another car.”

That driver isn’t the only one who’s been unable to take his eyes off Fox as of late. The 29-year-old took on her first acting job in Josh and Benny Safdie’s two-hour adrenaline rush, Uncut Gems, playing a jewelry store employee and girlfriend of Howard Ratner, a gambling addict played by Adam Sandler. After the film’s TIFF world premiere, she earned buzz for her portrayal of his rough-around-the-edges mistress, signed with WME and, in October, earned a Gotham Award nom for breakout actor. The role has given her a shot at a Hollywood career, one she hopes will include more acting and, later, producing, directing and, somehow, a way to further infuse art with activism. From any other ingenue, the latter sounds like a publicist talking point — but not from her.

Fox lived many lives before making her way to the big screen, and this corner booth inside the bar where she sips a Coke and recaps the journey. She’s been a New York City teenage troublemaker, It girl, muse, club kid turned club owner, poet, author, artist, photographer, painter, provocateur, domestic violence survivor, a Page Six headline-maker and someone who has raised her voice to say #MeToo. (In 2017, she accused notable artist and photographer Chuck Close of lewd conduct during a 2013 shoot. He later apologized.)

“I’m always changing. I’m always evolving. I’m always growing,” says Fox. “I want to explore myself in every facet. I don’t ever want to limit myself based on what other people have told me I am.”

Born in Milan to an Italian mother and American father, Fox’s early years were spent living with her grandfather near Milan because of her parents’ strained relationship. Her father, meanwhile, was “living in New York, like, figuring it out, trying to get an apartment and living on a boat.” When he landed a construction job and signed a lease, Fox left Italy to live full-time in Yorkville, a posh neighborhood on Manhattan’s Upper East Side. “It was just a total 180 from what I was used to. My family is Italian, traditional Catholic, and suddenly I was living with a crazy man in New York.”

To confirm the use of that particular adjective, Fox tells the following story: “The first thing my dad did when I got to New York was walk me to the corner and point to the street sign. He was like, ‘OK, this is where you live. If anything happens, this is where you live.’ Then he kind of just sent me off in the world, and I had to figure it out from there.”

That’s what she’s been doing ever since, albeit with many twists and turns. Fox says she never applied herself in school and got mixed up with friends who were drinking, drugging and clubbing in the way that city kids sometimes do. She has talked openly of surviving an overdose at 17. “It’s kind of a miracle that I’m OK because a lot of the people I grew up with aren’t doing so well. They’re still on drugs or in jail. A lot of them died.”

She credits a solid work ethic as one of the keys to getting out alive. “My dad didn’t give me money, so I always had to work.” She started off at a shoe store on 86th Street called Orva, in the hosiery department because nobody went there. “That’s where they put me because I was too incapable of doing anything,” she says. She worked in an ice cream shop and pastry shop. “Then I got into the sex industry pretty young, doing S&M stuff.”

The money was so good, she says — “Suddenly I could get my own apartment, pay all my own bills” — that it made up for the clientele. “They were all weird but nice,” she explains. “Like, submissive men who all had issues. Toward the end, I was like, ‘Dude, just go get therapy and stop coming here.’ “

She took her own advice and quit after a six-month stint to settle down with a boyfriend in a relationship that lasted six years. During that time, she partnered with friend Briana Andalore to launch a successful women’s clothing line, Franziska Fox, until she outgrew that business and segued to a series of provocative art projects using trauma as inspiration.

She self-published back-to-back books — Symptomatic of a Relationship Gone Sour: Heartburn/Nausea, published in 2015, and 2016’s PTSD — and hosted the art exhibit “R.I.P. Julia Fox,” with some of the work featuring paintings colored with her own blood. Combined, the projects provided intimate, unflinching looks at drug use, domestic violence, sex, mental illness and dominatrix work. “I’m so proud as a person, so to make myself vulnerable was hard, but it felt freeing and cathartic. I was living my truth,” she says, singling out the abuse she suffered in one of her relationships as hardest to reveal. “You have to use your pain as your gift. If you’re able to take something really negative and repackage it as something positive, you’ve nailed it.” 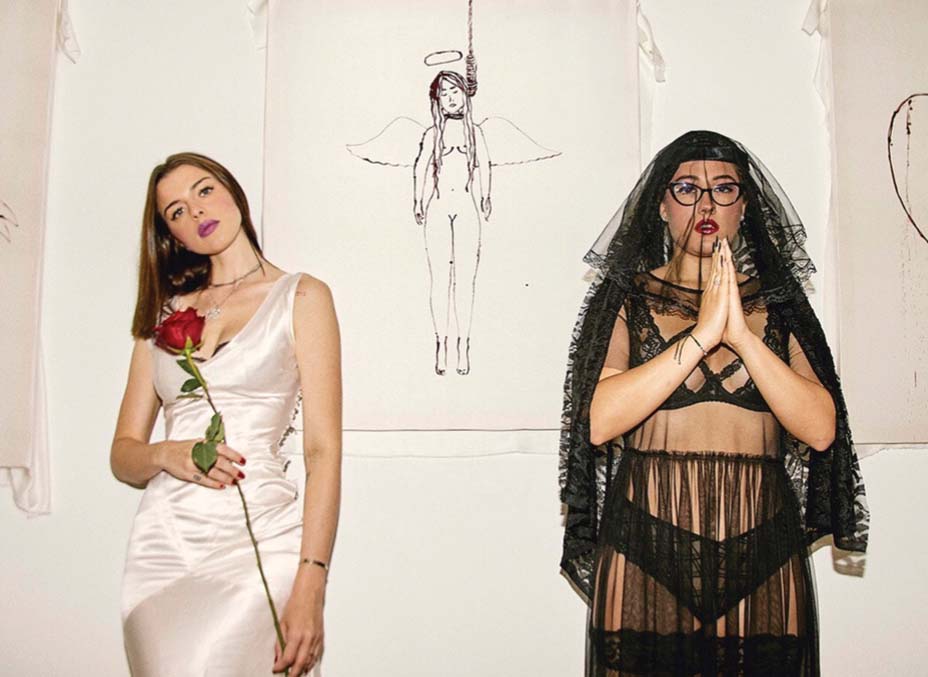 Josh Safdie noticed that quality when he caught a glimpse of Fox, first on the now-defunct social site Vine, and later when she walked by West Village restaurant Jack’s Wife Freda, where he was sitting on the patio with producer Sebastian Bear-McClard. “When you think you know her, you see another facet of her,” he says. “She’s like an uncut gem, really. The more you dig, the more beauty you see.”

The filmmaker, who had been developing Uncut Gems for five years before that chance meeting, saw more than 200 actresses for the role. Fox says she’d heard they included such stars as Lady Gaga, Kim Kardashian, Scarlett Johansson and Jennifer Lawrence, but never confirmed with Josh because “I didn’t want to drive myself crazy.”

What she does know is that “when the studios got involved and a lot of money was being poured into the project, they wanted a big-name lead actress.” She also had to prove to producer Scott Rudin that she could actually act. After Sandler was cast, she did a screen test with him in Barneys New York, the now-bankrupt department store. “The chemistry was so undeniable that I think that when Scott saw the tape, he was like, ‘OK, I get it.’ “

Fox threw herself into the role as much as she did any of her other projects, even going method for a scene in which her character stays up all night. “She looked beat, and I don’t think she realized that we’d be shooting the same scene all day long. So like an hour or two in, she said, ‘Oh my God, am I tired,’ ” Sandler recalls, laughing. “She was incredible. Very instinctive, and she played everything so real. I never knew what the heck would happen.”?

Fox isn’t sure where her next chapter will take her, but she’s leaning toward moving to L.A. to be closer to the industry. She’s inspired by Margot Robbie, who broke out in The Wolf of Wall Street before becoming a formidable producer. Like Robbie, Fox also recently married but is mostly private about it. (“He’s kind of my rock — he’s so unfazed and doesn’t care who I am. To him, I’m Julia,” she says of husband Peter Artemiev, who works in aviation, according to The New York Times.)

Just when you think you have a handle on her story, Fox says something else about her past, and it makes you think there’s something to what Josh Safdie believes. When you think you know her, another layer is unearthed, like an uncut gem. “I really have to stay focused and on the straight and narrow to avoid certain people and any type of trigger,” Fox says about the possibility of moving to another city. “That lifestyle still lingers, and that’s kind of why I want to get out of New York. Just to leave it all behind and not be reminded of anything so I can start fresh. Every time I’ve run away, it was like I was running toward something.”

She’s sure Hollywood is what she’s running toward now, but unlike that man in the car, she’s keeping her eyes on the road. “I always knew there was more for me — I just didn’t know if I could access it.”