Not too many actresses can say they followed their role in an adaptation of a Jane Austen novella — Whit Stillman’s Love & Friendship — with a vampire action sequel, but that’s Kate Beckinsale for you. The Oxford-educated Brit, 43, reteamed with her Last Days of Disco writer-director for a period performance that is winning praise among critics and pundits (and she has Underworld: Blood Wars opening Jan. 6). Stillman’s film has brought Beckinsale into the awards conversation, which until now has eluded the actress, who has dabbled in dramas, romantic comedies and actions films. Her portrayal of Lady Susan Vernon, a widowed mother trying to secure a husband — and thereby a future — for her teenage daughter, was years in the making. Beckinsale, herself a single mom to a teenage daughter, recently spoke with THR about the film and her unusual career trajectory.

You’ve done a number of period films, including a version of Austen’s Emma. But in Love & Friendship, in addition to the giant hair and the corsets, you’re also handling a lot of period dialogue. How physically taxing was this role?

It was surprisingly hard, I think partly because of how short a time we had to shoot the film. It really was the most daunting thing about it. And I was so in love with the part. Obviously, with Whit as a director, it was a dream job. But it’s a little bit like someone saying, “OK, King Lear. Go. Three days.” Just looking at those incredible amounts — page after page after page — of long, effortless speeches that [my character] had, I was thinking, just in terms of the regular shooting day, you really are going to need several hours at the end of that to prepare your lines for the next day. I was very aware that I was the person with the lion’s share of dialogue. If I wasn’t completely on point, the whole thing would’ve collapsed.

What resources did you pull from?

A lot of actors will tell you that well-written dialogue is much easier to learn than poor dialogue. So we had a very big advantage in that all of the lines are just so deeply written and nuanced and wonderful to play. But it had been a while since I’ve had scenes of that length with that much talking in them. It’s like doing a play. One of the things that I kept doing before we started shooting was emailing Whit saying, “Can we have the final copy of the script?” If you were doing a play, you would show up with it all memorized. But Whit was pretty cagey about that, which I’d forgotten after not having worked with him for a while.

The thing is, he doesn’t like having big conversations about tone or performance. He hates the hassle. What I’ve gathered after talking to him is that he really does spend so much time and care casting [his films] that he waits until he finds the person who seems to be the character for him, and then he just wants to get out of the way and let them get on with it. During the press tour for the movie — once we’d shot it and it was out — I found out that Whit had first thought of me for [Love & Friendship] while we were doing Last Days of Disco [in 1997]. He’d been waiting for me to age to the point where I could have a 17- or 16-year-old daughter. It was very strange to find that out retrospectively and also incredibly endearing and unique. 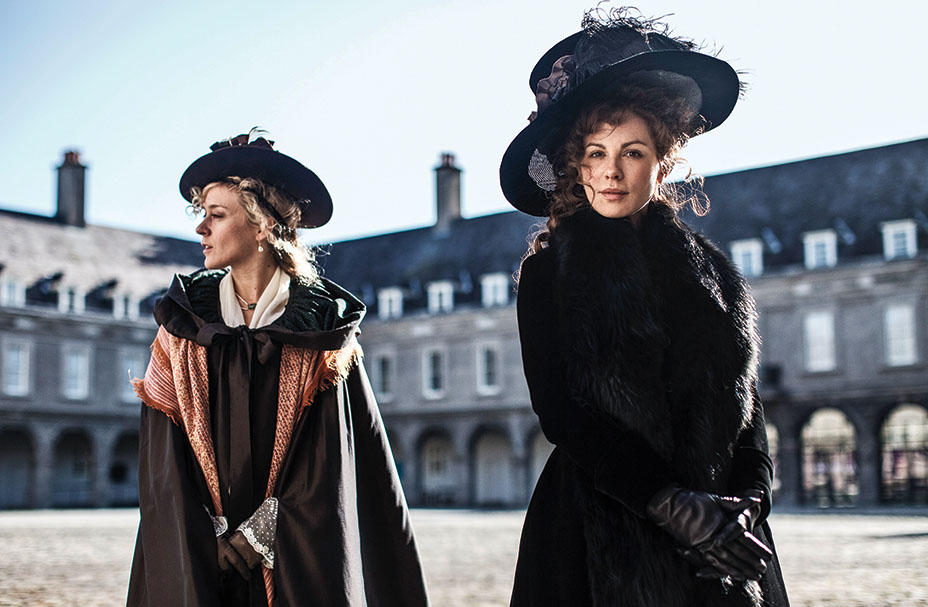 She feels like such a one-off, really, in terms of the time period that she’s in. This is somebody who’s talked about as being very charming and as being quite a viper. I wanted to find the lightness and the joy. She’s like a pro tennis player with her charm and wit. And so, it should be a pleasure to watch her doing that at the same time as you’re slightly appalled. That was the thing I was most concerned with. There’s a fine line between being arch and being alienating. In a society that wasn’t promoting freedom and sexual freedom and financial freedom and career freedom for women, she had a sense of her own rights that she was unshakable on. It was quite an oppressive society for a woman, and I really dug that about her, her pioneering spirit.

To what do you attribute your versatility?

When I became an actress, I was incredibly young. I started at 16 and was in my first film at 17. I felt I had a real choice to make: Am I going to go to drama school and study being an actor or am I going to go to university? And I ended up going to Oxford. I thought, “My family are all actors and directors, and all their friends are as well. I’m planning on spending my whole life with those people. It might be a good idea for me, given that I want to be an actress, to spend time with people who are passionate about loads of other things.” I was quite sensitive about the fact that there was some experience or magic secret that people were finding out in drama school. I’m not finding that out, therefore, I treated certain parts of my career as an apprenticeship. I’d done Cold Comfort Farm. I’d done Much Ado About Nothing. I thought, “I’m not a proper actor if I don’t do a play.” So I went off and did The Seagull. I hadn’t done a movie in a foreign language, so I did a film in French. It’d be nice to have more strings to play, so I’ll have a go at doing an action movie, which wasn’t ever in the cards for me, sensibility-wise. All of this was very much a deliberate thing. One of the things that’s been important has been to not be too massively attached to whatever your persona is at any given time. Life is long and, hopefully, as an actor life is long. Also, having a baby and starting out in big Hollywood movies while toting a child was an extremely big part of some of the decisions I ended up making. I didn’t go off and do every single movie that would’ve required me to leave my daughter.

You have fans from all corners of your career. What’s that like?

It’s always quite surprising because, for example, if a man comes up to me and says, “Sorry, I just wanted to mention that my favorite film of yours is …” I know in advance it’s going to be Serendipity. That was a romantic comedy that men actually really liked. I’ve been very, very lucky. But I’ve been incredibly unlucky in other ways. Some of the things you think have been the worst things to have happened to you actually turn out to be protective and OK. I know that sounds a bit nuts-and-berries and Zen. I’m not really that person. But I suppose it has to do with the age that you are — you get to have a little bit of perspective and enjoy what’s great about hindsight.

Bening most recently was nominated for a comedy actress Globe for 2010’s The Kids Are All Right. She won.

The Mortal Instruments star was handpicked by director-star Warren Beatty for a plum role in his period film.

The film came out over the summer, but Streep’s performance as a bad opera singer is going the distance.

Zellweger has been nominated twice for her Jones character, so a third isn’t out of the question.

She’s the frontrunner, not only in this category, but in the lead actress Oscar category as well. It’d be her first lead acting recognition.

Earlier this year marked McCarthy’s first nomination in this category, and first Globe nom ever, for Spy.

Wiig has a nom for 2011’s Bridesmaids (for which co-star McCarthy was nominated for an Oscar but not a Globe).

She last was nominated in this category for Bull Durham (1988) and has racked up five lead drama actress noms since.