But that doesn’t mean that the two entities get along.

Goldenvoice, which puts on Coachella each year, has filed a lawsuit against Urban Outfitters Inc., Free People’s parent company, for trademark infringement and unfair competition over the retailer’s unlicensed use of “Coachella” to market their festival-ready apparel. According to the suit, which was filed in the central district of California on Tuesday, Free People ignored Coachella’s cease-and-desist letter sent ahead of last year’s festival in April. Urban Outfitters told The Hollywood Reporter that it does not comment on pending litigation.

Offending products named in the suit include the “Coachella Valley Tunic” (which was removed from Free People’s website on Thursday afternoon) as well as the “BELLA COACHELLA” collection, which Free People sells at third-party retailers like ASOS, ShopBop, Zappos and Macy’s. 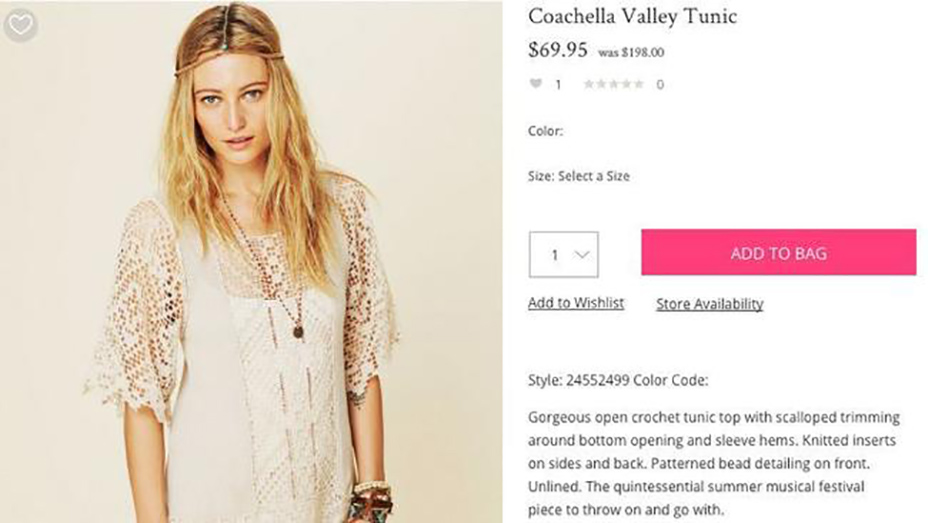 Other Coachella-branded products on the Free People site (which have also been removed) include the “Coachella Mini Dress” and the “Coachella Boot.” The plaintiffs cite the use of the phrase “summer music festival” in product descriptions as acknowledgement of reference to the Coachella Valley Music Festival.

In addition to the product and collection names, Goldenvoice also took issue with the use of “Coachella” in Free People’s URL and search keywords. “Defendants have also purchased one or more of the Coachella Marks as a “keyword” from one or more Internet search companies, include Google,” reads the complaint. “As a result, a Google search for “Coachella clothing” results in an advertisement for Defendants’ infringing goods.”

Goldenvoice and Coachella give licenses to use their trademarks sparingly. However, one such case is the H&M Loves Coachella co-branded collection, which was released in 2015 and 2016. Plaintiffs claim that Free People’s Coachella apparel not only unfairly competes with the licensed apparel, but also creates confusion for customers.

The plaintiffs are seeking undisclosed monetary damages as well as “corrective advertising to inform consumers that Defendants are not authorized sponsors of Coachella.”