In the current #MeToo era when women are talking inclusivity, beauty standards and body positivity, the version of sexy that Victoria’s Secret has continued to peddle seem enormously out of touch. That disconnect (along with corporate CEO Les Wexner’s close ties to Jeffrey Epstein, who has been charged with the sex trafficking of underage girls) has translated to declining sales and an image crisis for the lingerie brand. In May, the brand announced that it was canceling its annual Victoria’s Secret fashion show on network television after slumping ratings. And now it seems that the company is taking more proactive steps to refresh its tired identity.

On Friday, the openly transgender Brazilian model Valentina Sampaio posted on Instagram that she will appear in a forthcoming Victoria’s Secret Pink campaign, the first step toward inclusivity in the company’s advertising. Victoria’s Secret Angel Lily Alridge commented with a long string of emoji hearts, while LGBTQ advocate and Orange is the New Black star Laverne Cox wrote “Finally!” (Sampaio also made history in 2017 as the first transgender model to appear on the cover of Vogue Paris.)

However, Wexner, the 81-year-old chief exec of the Columbus, Ohio-based company L Brands, Inc. (formerly Limited Brands, Inc.) that counts Victoria’s Secret and Bath & Body Works among its stable, on Monday announced the resignation of chief marketing officer Edward Raznek in a memo to employees that the company forwarded to The Hollywood Reporter. 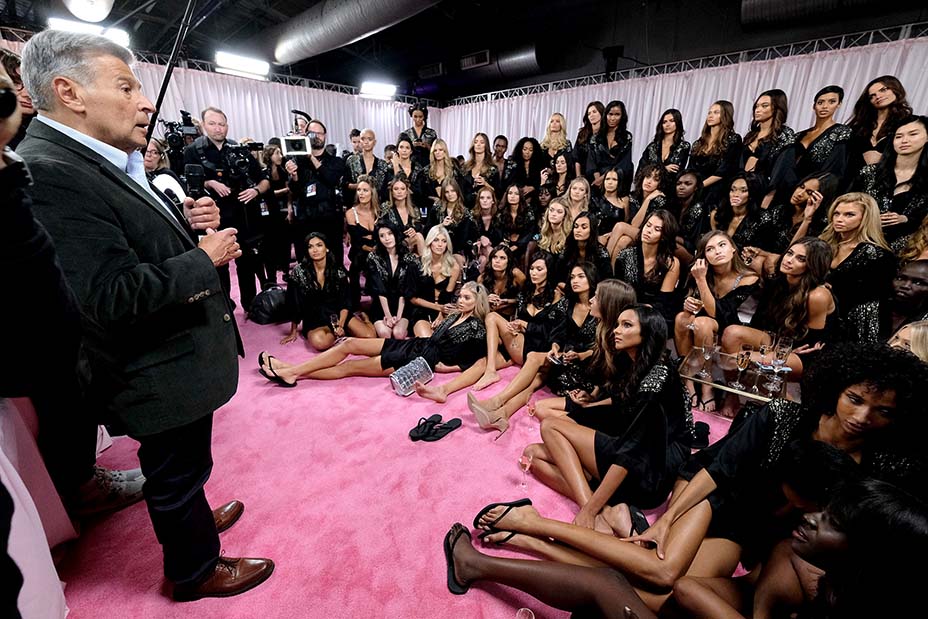 The back-to-back news called to mind Razek’s controversial and out-of-touch response in a Vogue interview in November that there was no space for plus-size or transgender models in the Victoria’s Secret fashion shows “because the show is a fantasy.” The comments left the company in hot water, and Raznek publicly apologized on Twitter. But the fantasy could (or maybe should) have rather been his future employment, which surprisingly continued for another eight-plus months.

“I received the note below that Ed sent to his team,” Wexner wrote in Monday’s memo. “After my conversations with him, and with his permission, I am sharing it with all of you. There are few with Ed’s passion and talent in this industry, but I have faith in our incredible teams, talent and product, and I look forward to the future as we grow and change. While we review how to best transition Ed’s work, SVP of Brand and Creative Ed Wolf will serve as interim head of Brand and Creative reporting to me, and Bob Campbell, VP, Creative for VS, will serve as interim head of VS Creative reporting to John Mehas. In the meantime, I ask everyone to continue their maniacal focus on fall and holiday.”

Razek’s message read: “So long partners. With the exception of Les, I’ve been with L Brands longer than anyone. I’ve loved every minute of it, and every one of you. I’ve appreciated your partnership, your energy, your teamwork and your enthusiasm. You are, every one of you, a joy to work with, and a joy to be with. The best partners anyone could ever hope for. And I’ve loved coming to work here, every single day, for many, many years. But all good things must and do, inevitably come to an end.”

The 71-year-old executive, who has hand-picked Victoria’s Secret models for over 15 years, continued: “A few weeks ago, I shared with Les my desire to retire sometime around mid-August. It was a tough conversation to have because, as some of you must know, we have shared so much together for so many years. Including a deep love of this business. Still, it’s time.”

Razek ended his note by thanking his colleagues for “the smiles, the hellos, the laughs” and “the mission”: “I could not be more lucky than to have been with all of you at this extraordinary and quite singular organization. I truly hope you know, deep in your hearts, how very special this place is. I do – more than ever. Much love and respect to you all.”