Language matters to Tanya Saracho, which is precisely why some characters on her Starz half-hour drama, Vida, speak only Spanish — with no English translation. “What you’ll miss maybe is an inside joke,” says the showrunner, who came to Hollywood just a few short years ago from the world of Chicago theater. “But you don’t ever miss story.” And the story of Vida is fresh and topical: After the death of their mother, two Mexican-American sisters return to the Boyle Heights neighborhood where they grew up and confront a host of hot-button social issues, from gentrification — “gentrification of a Latinx space by upwardly mobile Latinx,” Saracho explains — to gender identity.

Saracho, 42, spoke with THR about creating a new kind of writers room and the joy of introducing audiences to a rich new glossary of terms like “pocha.”

What’s the ethnic and gender makeup of Vida’s writers room?

This room is all Latinx, and we use the term Latinx, not Latino and Latina — we take away gender by putting an X. And that’s not up to me. That’s a term that’s being used. So it’s an all-Latinx writers room. There’s one male, a straight cis male and the rest are female-identified, and half of us are queer. If you’re talking about nationality, we have Dominican-American, Chilean-American, Salvadoran-American and two Chicanos — that’s Mexican-American — and then me. I’m a Mexican national.

How is the day-to-day experience in your writers room different than in others?

In other rooms, I’ve been the token, I’ve been the diversity hire — which I’m glad I was because that’s how I got into the world of television-making. But sometimes when you’re the token, you become the cultural ambassador, especially if you’re the only person of color in the room and the only woman, which I was for a few months. You become the representative for it all. I represented everyone in the world that is an “other.” But you don’t want to do that. First of all, that’s impossible, but also it’s just a lot of pressure.

Vida is replete with Spanglish and Mexican slang words, deliberately used as they are spoken in L.A. What conversations do you have around the accuracy of the language?

There are about three writers who are L.A. Latinx. The two other Mexican writers are Texas Latinx, so we have a different kind of slang. And there’s a New York slang. So the slang is so important. We also outsource it sometimes, like, “Let’s make sure it’s right.” So we used a community liaison, and we showed her all the scripts. She was an activist from Boyle Heights. Spanglish is very natural. It’s however it comes out. But there are a few patterns that all of us, especially Mexican-American writers, just noticed in how we utilized Spanglish. It comes out of necessity when you can’t find the next word. You go to whatever language will serve you best. And there is Spanglish spoken all day in our writers room too. 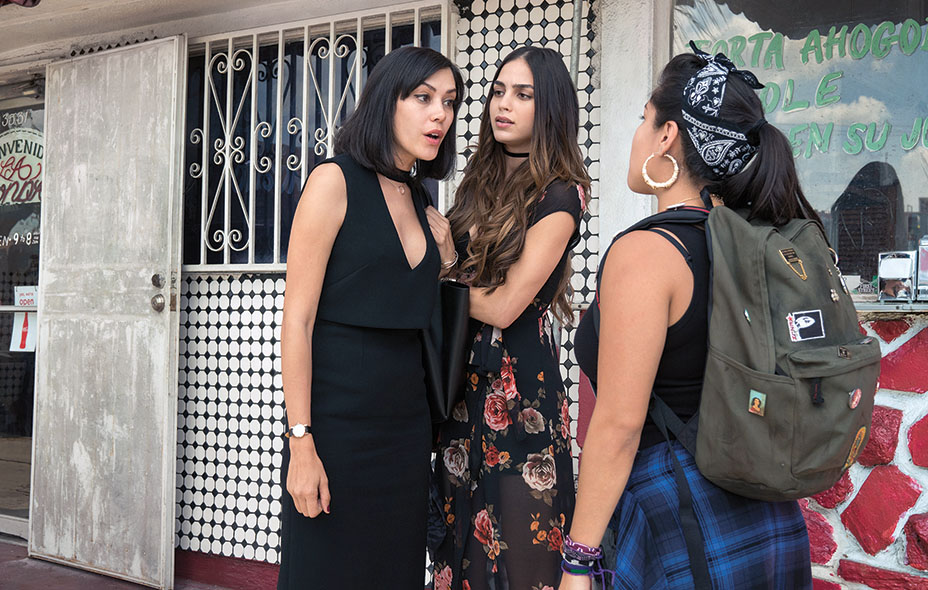 What are some of your favorite slang words that have been on the show?

That’s one of the creative joys, that I’ve never heard these words on American TV, and now they’re out there! I love that we’re introducing the idea of “pocha” and “pochaness.” It used to be a derogatory term, and now it’s sort of being taken back, and the way we’re utilizing it, you see both. And that’s actually what’s happened to the culture, that it used to be a derogatory term that Mexicans used for Mexican-Americans; it means sort of half hybrid, neither from here nor there, which was to lessen the Mexican-American experience. And now it’s being retaken, sort of like the word “bitch.” And “carnala,” which is a very Eastside, East L.A. word. Other Mexicans and Mexican-Americans use it, but it’s very associated with the Eastside, and it means “of the same flesh, sister.” “Carne” means flesh. “Carnal” is for the male and “carnala” is for the female. And I love that we use it because it is about sisters.

You’ve said that putting Mexican slang on cable TV is a “radical political act.” Why is that so?

It’s a political act to put brown bodies onscreen already, because we are marginalized and seen as “other.” Now it’s also a political act, and I think it’s radical, the way we’re building it. The eyes that are shooting this show are Afro-Latina eyes [of cinematographer Carmen Cabana]. The wordsmiths are Latinx. So it all becomes a political act because for so long we have not been allowed to tell our own narrative.

In theory, it’s a great idea. When you put it into practice, nobody’s training you in how to act, how to not other-ize diversity hires; in practice, it becomes this other thing. But I do think any and all ways we can get in there [are positive] because historically we have not had access and opportunity to these positions. So I’m still for it. I just wish it was better managed and it didn’t have this scarlet D for “diversity.”