Big openings with outrageous fanfare happen all the time in Las Vegas. But recently a major debut attended by the likes of Leonardo DiCaprio, designer Virgil Abloh and DJ duo The Chainsmokers managed to fly under the radar. Maggio and Ignazio Cipriani, heirs to the hospitality empire which includes the Mr. C brand of hotels and restaurants from Hong Kong to Ibiza to Mexico City, quietly debuted their first West Coast Cipriani restaurant inside the new Wynn Plaza in November with a star-studded guest list and no headlines.

Wynn Plaza, attached to the Wynn and Encore resorts, is a shopping, dining and wellness destination featuring first-to-Las Vegas stores and hotspots such as Balmain, Urth Caffe, SoulCycle, Marie France Van Damme, James Perse Yosemite and luxury brands Celine, Stella McCartney, Louis Vuitton Men’s (for which Abloh is artistic director) and future plans for a boutique for his Off-White label as well. 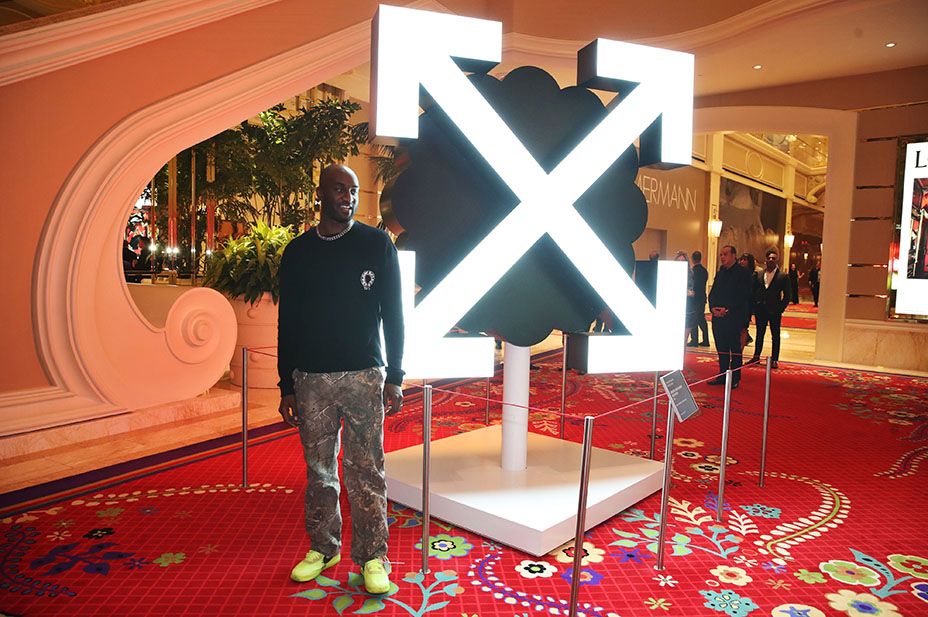 With currently more than half the tenants open, Wynn Plaza is a free-standing building connected to Wynn Las Vegas resort that fronts Las Vegas Boulevard. The Wynn and Encore Shopping Esplanades, which are inside each resort, already boast some of the city’s most exclusive retail including Alexander McQueen, Hermes, multiple Chanel stores, Prada, Cartier, Givenchy and Moncler, among others.

Among this new collection of stores is also one of the most significant West Coast dining reveals of the year: Cipriani, which, like Wynn, is known to respect the privacy of its customers. 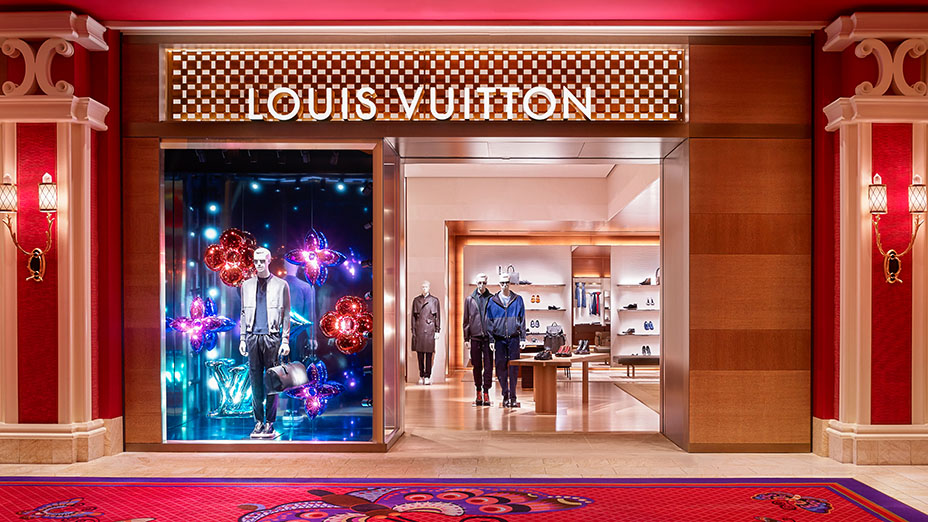 “[Celebrities] feel at home when they come to our venues, and that’s a sensation that perhaps they don’t get to feel as often,” says Maggio Cipriani.

“We don’t call the press,” says Giuseppe Cipriani. “We don’t advertise when a famous person comes in. They feel like they’re safe. They are very well served. I think that there’s no other secret. We live in a world [where] everybody knows what the other guy is doing, and I think we try to keep as private as possible.”

Glamour, fashion, Bellinis and, of course, pasta are all hallmarks of the Cipriani experience.

Giuseppe says that they entertained deals from almost every Las Vegas casino-resort at one time or another. “I’ve been coming to Vegas for a long time and we never really quite found the right location to open and the right situation. Wynn made it possible,” he says. “We are the only restaurant that is not owned by the [hotel]. Haim Chera [principal of Crown Acquisitions], who co-owns the development with Wynn, has been a good client of ours for many years, so the combination of that made it very appealing to us.”

Wynn’s Cipriani has a nautical feel, courtesy of the same Florentine architect Michele Bonan that designed the Miami, Monte Carlo, London, Dubai and Abu Dhabi outposts. The space hugs the corner of the building, giving it a circular feel. The tables are low and the banquettes swathed in plush sea blue with tan leather, walnut and chrome accents. Portholes look out onto a virtual ocean.

The walls are canvassed by pictures of Cindy Crawford, Claudia Schiffer and Naomi Campbell by fashion photographer Marco Glaviano, a longtime friend of the family, who frequented Harry’s Bar in Venice. 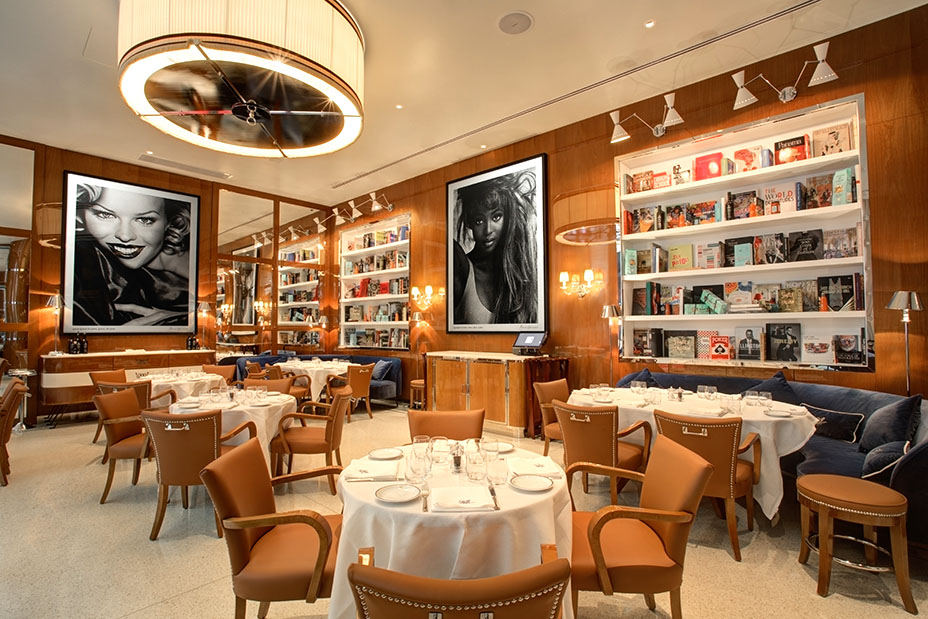 No night at Cipriani is complete without a Bellini, the white peach-puree and Prosecco cocktail created in 1948 by Giuseppe Cipriani Sr. at his original location, Harry’s Bar. They also claim to have invented Carpaccio and baked tagliolini with ham that has been known to make diners moan. The Las Vegas location also offers a sublime Margherita pizza as well as other types of pies and a small sushi menu.

Abloh didn’t just come for the food. In fact, he has been “in residency” at the resort in various capacities for three years, including as a DJ. And now, Wynn Plaza is also the new home of the “Arrows and Flower Neon Sign” sculpture by Takashi Murakami and Abloh, which was recently shown at their collaborative show at Los Angeles’ Gagosian gallery, titled “America Too.”

The 9-foot multimedia work made of neon, aluminum and stainless steel and located adjacent to a ground-level escalator bank at one of the entrances was inspired by the neon signs of Las Vegas and features Murakami’s signature smiling flower and Abloh’s Off White Arrow emblem. 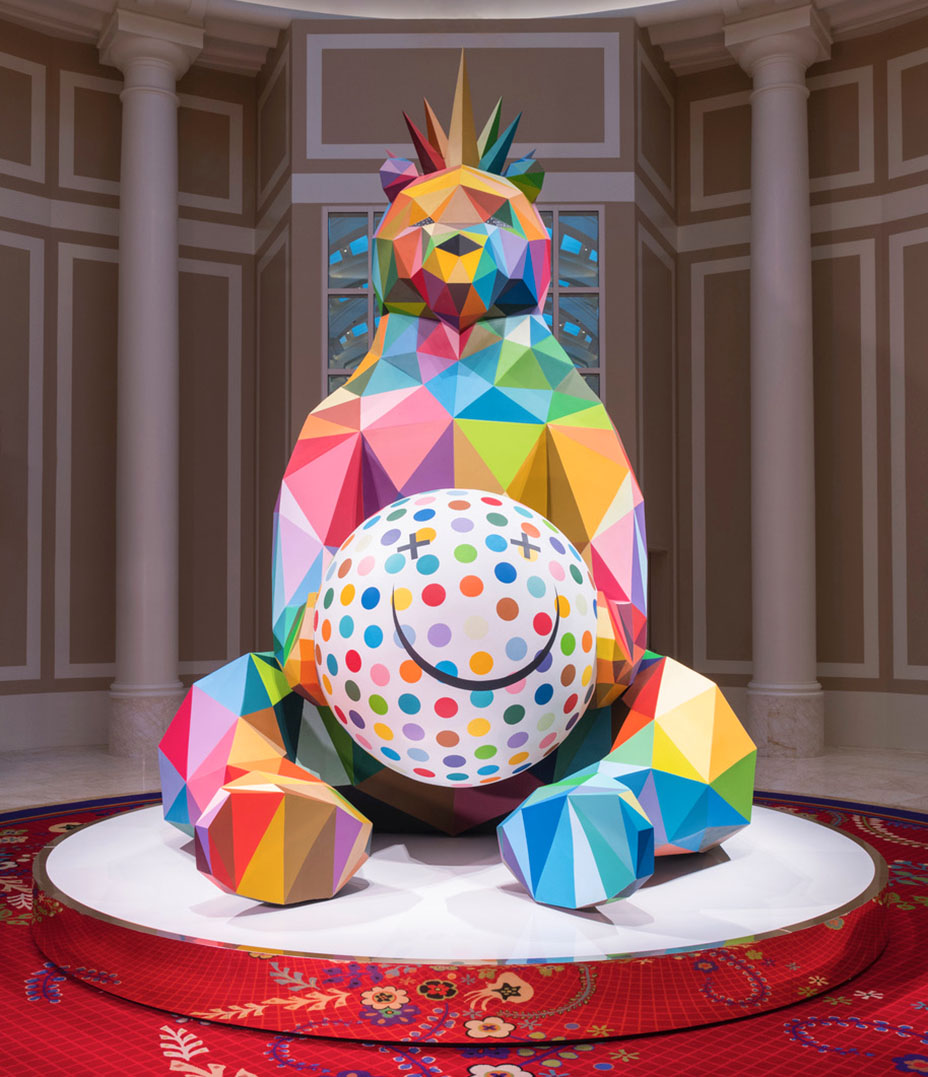 Another notable art work, the “Smiling King Bear” by Spanish artist Okuda San Miguel, also calls the Plaza home. The 16-foot tall sculpture, done in the Spanish contemporary artist’s prismatic style, depicts a whimsical bear with a crown playing with a happy ball. The installation was originally featured in Downtown Las Vegas as part of the 2017 Life is Beautiful Music & Art Festival.

From Roy Choi to Michael Symon's Latest: Where to Chow Down in Las Vegas Now