Since revenue from film and TV is expected to grow at a snail’s pace in the U.S. in the next five years, Hollywood is looking to virtual reality for its next growth spurt. Sure, the $600 headsets are clunky and some early content isn’t much better, but a study out June 7 from PricewaterhouseCoopers suggests the technology will improve so rapidly that VR will soon go mainstream.

It’s not far-fetched to envision consumers en masse strapping on goggles — made by such tech titans as Google, Sony and Samsung — to play video games or watch the latest incarnation of Sharknado, with the man-eaters swirling about their living rooms. “There’s no iTunes for VR content now, but our forecast anticipates that sort of marketplace in about three years,” says PwC partner Christopher Vollmer.

Including VR in its annual Entertainment & Media Outlook forecast for the first time, PwC predicts a growth rate of 64 percent annually for the next five years, with VR becoming a $5 billion industry in the U.S. by 2021. It will generate almost half as much as the box office, which will grow at a minuscule 1.2 percent to $11.2 billion in that time frame.

While video games are considered the low-hanging fruit of VR because the technology should vastly improve on an already established interactive experience, video ultimately will be the bigger business, according to PwC. That’s good news for Hulu, Netflix and the major film studios, which are eager to crack the code on how to make money from the new tech. It’s also why startups such as Jaunt VR (Disney is an investor), Within, Baobab and Penrose Studios are popping up, creating original VR short films and TV-style episodes.

21st Century Fox, which created FoxNext VR Studio in January, is one of the most active participants. It will put out a VR short promoting its July 14 release War for the Planet of the Apes, in which the viewer becomes an ape, and it partnered with Ridley Scott’s RSA Films for a short promoting May’s Alien: Covenant, which was viewed 4 million times. But it’s not all about free promotions, as FoxNext also is working on commercial versions of Apes and Alien VR videos, and it has released The Martian VR Experience, whose viewers paid $9.99 apiece to play — virtually — Matt Damon’s part in 2015’s The Martian. “VR will continue to develop and be adopted at an accelerated rate,” predicts FoxNext VR Studio general manager Brendan Handler. “It gives filmmakers an endless canvas to tell stories and offers consumers what they have been craving: more immersive experiences.”

Fox Home Entertainment also is charging $14.99 for VR versions of mainstream movies purchased through Facebook’s Oculus Video, which allows fans to use their phones, coupled with Samsung Gear VR, to watch titles such as Die Hard and Birdman on giant, virtual movie screens in a 360-degree theater. And Imax has introduced a model in which consumers sit in their own pods to watch shortform content in a cushy chair that moves and vibrates according to the “onscreen” action. At the Imax VR Experience Centre in a stand-alone building in L.A., ticket buyers pay up to $12 apiece to watch the first episode of Raising a Rukus, an animated series from The Virtual Reality Co., co-founded by Maleficent director Robert Stromberg.

One hang-up Hollywood must figure out is how to turn what is a solitary experience into a shared one, so users can still watch sports with their pals and go to theaters with hundreds of strangers while immersed in virtual reality. “That needs to be solved,” admits Vollmer. “Right now, VR is for power users — the people who want to be first and second, not third or fourth. It’s a dynamic space in the entertainment ecosystem, but it’s very immature.”

Carolyn Giardina contributed to this report. 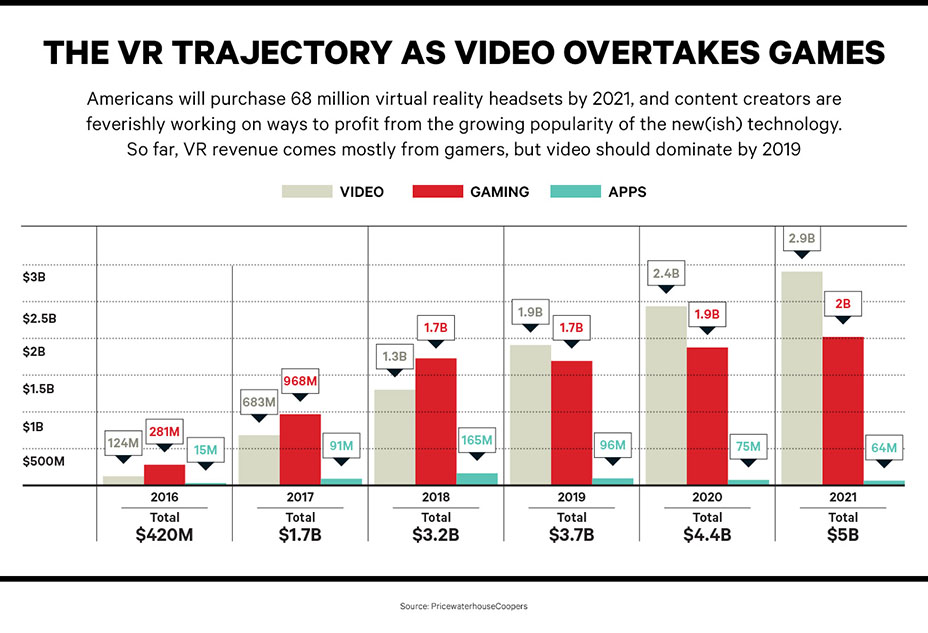