Tony Magaldi corrects the record about one Gianni Versace anecdote that has persisted all these years: The designer did not eat breakfast at News Café the morning of his death on July 15, 1997. “His routine was to visit our newsstand in the morning and buy out-of-town papers; once in a while he had coffee with us,” explains Magaldi, managing partner of the iconic 24-hour café on Miami’s South Beach. “But he rarely ate here; he had his own chef at home.”

News Café will be one of the locations seen when American Crime Story:The Assassination of Gianni Versace premieres Jan. 17 on FX, but the script doesn’t put the designer there on that fateful day. “I thought they might re-enact when he came in that last day, but it was another scene,” says Magaldi, who recalls standing on the café’s front steps on that July 1997 morning. “I remember how hot it was – July in Miami, you know? He came in, bought his papers and left. Not long after, a cop came by on his bicycle and asked if Versace had been here, and I said yeah, I had just seen him. And then he sped off. It’s one of those days you don’t forget.” 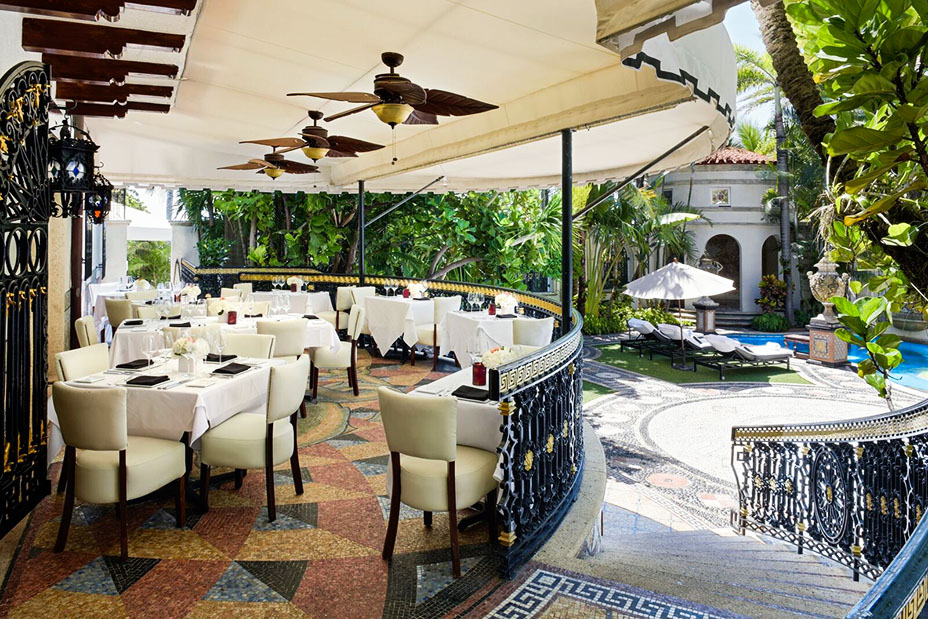 Memories of Gianni Versace have not faded in South Beach over the two decades since Andrew Cunanan shot and killed the designer, who was just 50 years old, on the steps of Casa Casuarina. Versace had purchased the South Beach mansion for $2.95 million in 1992 and lovingly converted it into not only his personal residence but also one of the world’s most celebrated examples of Italian Baroque splendor (it’s now a luxury hotel). Versace’s big-picture vision in this endeavor shouldn’t be underestimated: In 1992 South Beach still felt undeniably dingy and largely underdeveloped, dotted with faded Art Deco buildings occupied by senior citizens, many of whom spent their mornings (before the sun rose to sizzling temperatures) in lawn chairs on the porches of these forgotten hotels; locals had dubbed it “God’s waiting room.” But with News Café as a buzzy spot at Eighth Street and Ocean Drive, Casa Casuarina situated between 11th and 12th streets, and now-legendary hotels like the Clevelander, the Carlyle (used as a location for 1996’s The Birdcage and now a condo building) and the Tides (where portions of 1999’s Random Hearts were filmed) nearby, not to mention considerable help from the fashion and modeling industries, the oceanfront avenue evolved within less than a decade into one of the world’s most glamorous vacation spots.

These days you will find plenty of onlookers at the gates of Casa Casuarina; the numbers have not diminished after all these years. “We have literally thousands of people taking photos in front of the house each week — it’s actually the third most-photographed home in the U.S., after Graceland and the White House,” maintains Chauncey Copeland, general manager of the property, now the Villa Casa Casuarina, a boutique hotel, restaurant and event space owned by Victor Hotels Management since 2013.

American Crime Story execs contacted both Magaldi and Victor Hotels Management early in 2017 when they were getting set to film this latest installment of the Ryan Murphy-produced anthology. A miniseries highlighting the devastation and after-effects of Hurricane Katrina had been planned, but as the 20th anniversary of Versace’s murder approached, this story — broken into 10 episodes and based on Maureen Orth’s 1999 book, Vulgar Favors: Andrew Cunanan, Gianni Versace and the Largest Failed Manhunt in U.S. History — was pushed to the front of the line. The News Café scene was filmed in just one day in May 2017. “They needed a couple of days prior to that, because just the month before we actually had closed down the newsstand; everyone is always on their phones these days, so we didn’t really need it anymore,” Magaldi says. “But they did a great job bringing everything back to what it looked like at that time.”

The production took over Casa Casuarina, meanwhile, for the entire month, Copeland says. “At one point I know they were going back and forth about how they could re-create things as best they could on a Hollywood lot,” he notes. “But then they realized how little we had changed the environments, and they got very excited about filming on site. They didn’t have to do very much to it: They switched out some courtyard furniture for something more of that era, added some vintage chaise lounges by the pool, repainted the gate the color Versace originally had it, and removed some exit signs that are required because we’re a hotel. That’s really it.”

Indeed, it would have been costly to reproduce Versace’s vision on a soundstage. After he purchased the property, the designer reportedly spent $33 million on restoring and enhancing the original 1930 building, which had been conceptualized by Alden Freeman, an architect and heir to the Standard Oil fortune. Casa Casuarina, which takes its name from the species of tree Freeman regretfully razed while constructing his home, had changed hands and fallen into disrepair over the years; it was a dilapidated apartment building with 24 units when Versace discovered it during a South Beach vacation (among the elements that charmed him was a 1928 statue known as Kneeling Aphrodite, installed long ago by Freeman and currently positioned at the front entrance). Versace combined the building’s 24 units into an Italianate villa with 10 bedroom suites; after purchasing and tearing down the property next door, he added both a new wing and a garden with a 54-foot, mosaic-lined pool. 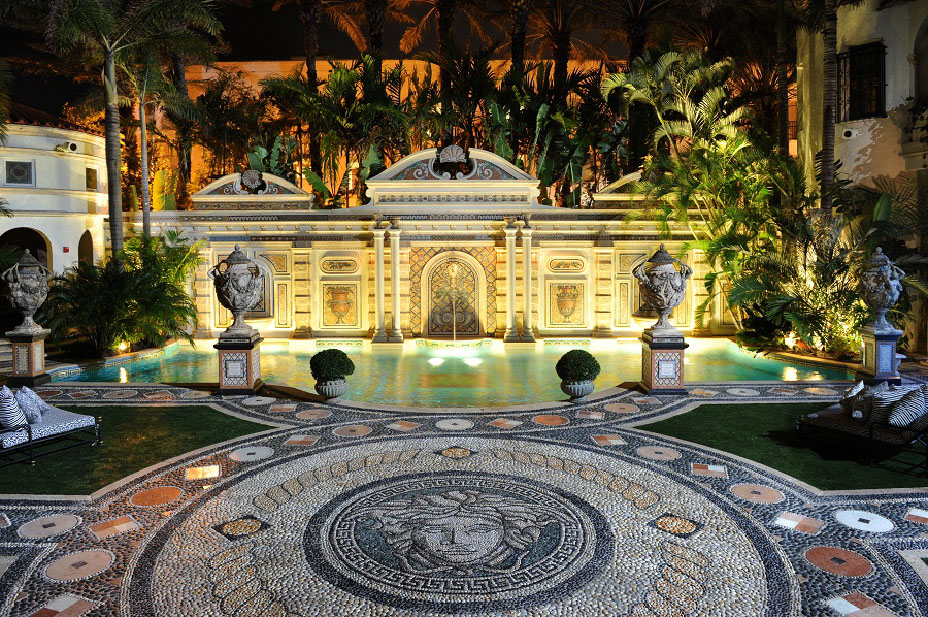 Those 10 bedroom suites remain largely unchanged, Copeland says. Donatella Versace removed furniture, artwork and other personal items, putting most of it on the auction block at Sotheby’s in 2001 after selling Casa Casuarina in 2000 to telecom millionaire Peter Loftin, who tried to make a go of the property as a private club. The current owners painstakingly examined books and old magazine layouts in an effort to reproduce Gianni Versace’s original interiors. “We combed through old photos and available film stock and also spoke with people who had worked with him on the design,” Copeland says. “There were several pieces we had to re-create, but we wanted to be faithful to his original vision.” (It should be noted that Donatella Versace has disavowed the miniseries; on Monday the Italian label released a statement affirming that no one connected with Versace authorized Orth’s book or the resulting screenplay, and that the miniseries should be considered “a work of fiction.”) 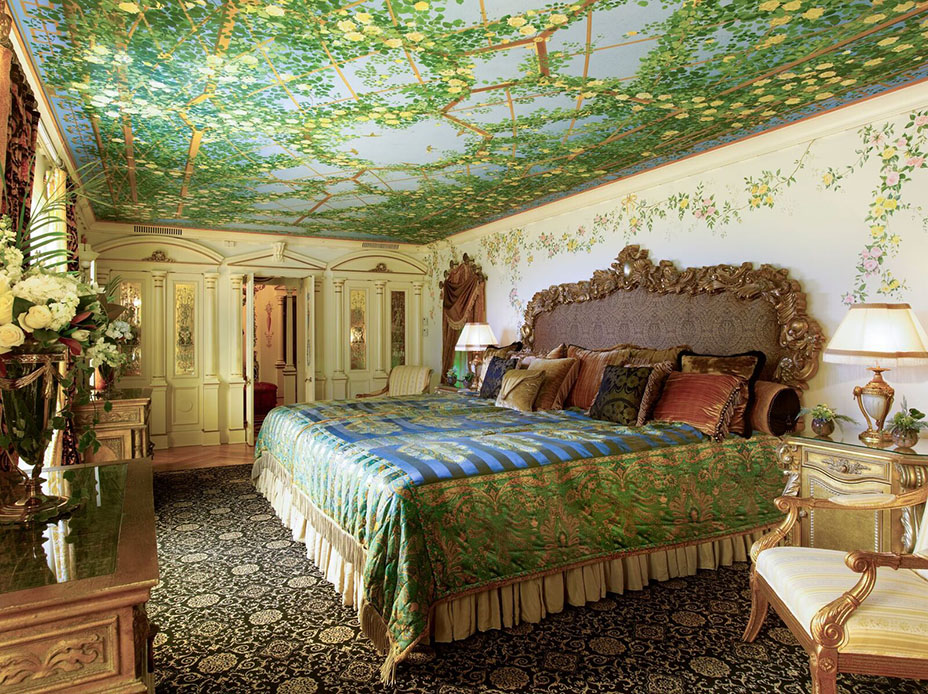 During high season — October through April — booking one of the suites can be tough, especially if you want to stay in the connected two-bedroom Villa and Empire suites; Versace slept in the former, which is adjacent to the latter via a lavish vestibule. The decor is as opulent as you might expect, with details ranging from frescoes to double-king beds that stretch 12 feet across. Rates for any of the 10 suites range from $899 to $1,599 per night during the slower summer months on up to $1,399 to $2,999 during high-occupancy periods. Hotel guests also are able to swim in the ultra-glamorous pool, but only until 4 p.m. Tuesday through Sunday. “That’s when we start to set up the restaurant, with tables on the pool deck,” Copeland explains. “On Monday, when the restaurant is closed, you can swim all day.” 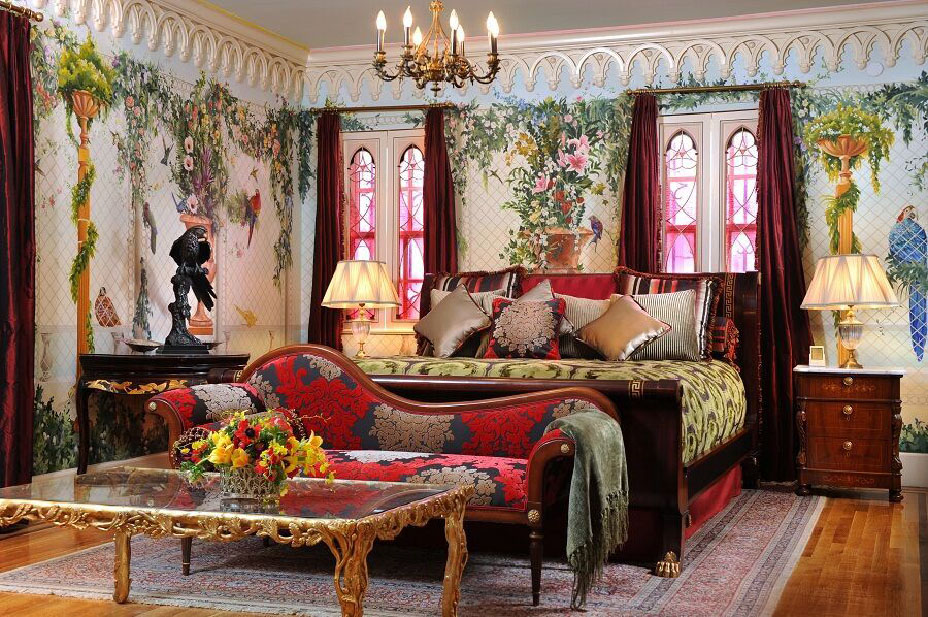 Rechristened Gianni’s in 2016, the restaurant features a menu that showcases Mediterranean seafood and is helmed by executive chef Thomas Stewart, who cooked dinner for the James Beard Foundation at Casa Casuarina soon after taking over the kitchen. In addition to the dining room, tables spill over onto a raised terrace and the aforementioned pool deck (during high season, tables also are positioned in the galleries leading to various dining areas). And regardless of season, don’t expect to walk in without a reservation; the privacy of the property remains strictly guarded. “Anyone with a reservation is of course welcome to enter,” Copeland says. “We’re very protective of the space, but that’s also for the enjoyment of our guests.” 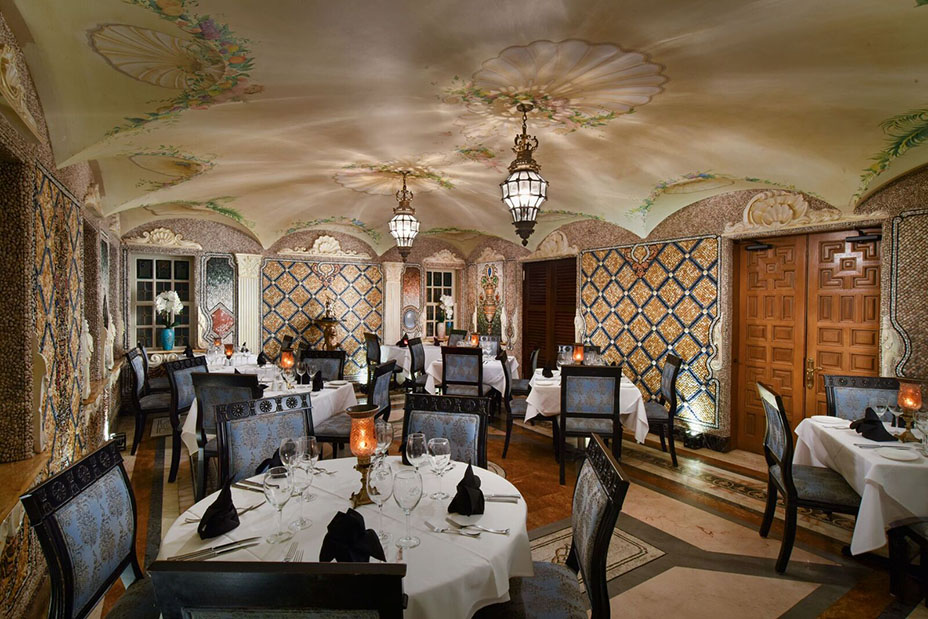 Ultimately, with the premiere of the miniseries a week away, has Casa Casuarina been feeling any effects from, say, the release of various trailers, which make it clear that Versace’s beloved South Beach residence was used to its full advantage? “We’ve been on a steady rise in interest the past few years, so it’s really hard to say,” Copeland says. “A lot of people, however, still don’t know that they can stay here and eat here; I have no doubt that interest will increase within the next few months.”

Twenty years later, Magaldi is happy that News Café patrons still seek out the site because of its connection to the most famous neighbor he’ll ever know — not because it’s good for business, though that idea is undeniable, but very simply because he genuinely liked Gianni Versace. “He was very gentle, quiet, unassuming,” Magaldi says. “Everything I saw about the [miniseries] production was that they were trying to be respectful to his memory. That was important to anyone who was here when it happened. That made me feel good about doing it.”

Copeland agrees. “If they bring to film what we saw them doing, I think it’s going to be a very high-quality production,” he says. “From our point of view, what Gianni Versace brought to South Beach was nothing less than heroic. He established himself right here in the middle of things when it was still very edgy and unknown. What happened was a tragedy. But we’ll always feel it’s important to celebrate the man.”