“This morning our Wabi caught fire. We’re all OK. It’s a really sad day, but we’re going to rebuild and be better than ever.”

So reads a Dec. 12, 2018, post on the Instagram account of Wabi in Venice, California, confirming that a devastating fire gutted the Abbot Kinney sushi staple that had served the area for 19 years as a go-to for local foodies and bold-faced names alike. It was shared along with nearly a dozen somber images, some showing firefighters surveying the charred scene, others with general manager Brent Moon standing amid the rubble, and one featuring the entire team and a promise that “the comeback will be epic.”

This morning our Wabi caught fire. We’re all ok. It’s a really sad day , but we’re going to rebuild and be better than ever. Thank you for the calls and hugs. Wabi Venice, We survive. Love Tricia,Sam, Brent, Rain, Sterling, Leah ,Carla Gilbert.

It took a bit of time, but owners Sam Marshall and Tricia Small were ready to make good on that by securing a new name, Wabi on Rose, inspired by a new lease at 512 Rose Ave., #F. They were finishing final tweaks in the kitchen, adding sushi cases and other minor fixes, and just about to open doors in March with the help of a new lead investor and business partner — former Paramount Pictures vice chairman Rob Moore.

Then the unthinkable happened: The coronavirus pandemic swept through the state, leading both California Gov. Gavin Newsom and Los Angeles Mayor Eric Garcetti to announce strict safer-at-home mandates that forced closures of dine-in restaurants, while still allowing for takeout and delivery. What to do with Wabi?

“Well, great, what are we going to do now?” explains Moore of the fleeting reaction of the Wabi on Rose team that was immediately replaced by positive actions. Marshall and Small had rehired many members of the team who were there when the fire ripped through the building, so they were prepared for dealing with crisis. “Compared to what they’d gone through, they were ready. There was never a moment of hesitation. They just immediately adapted and addressed how to open in an environment that would be safe for the well-being of everybody.” 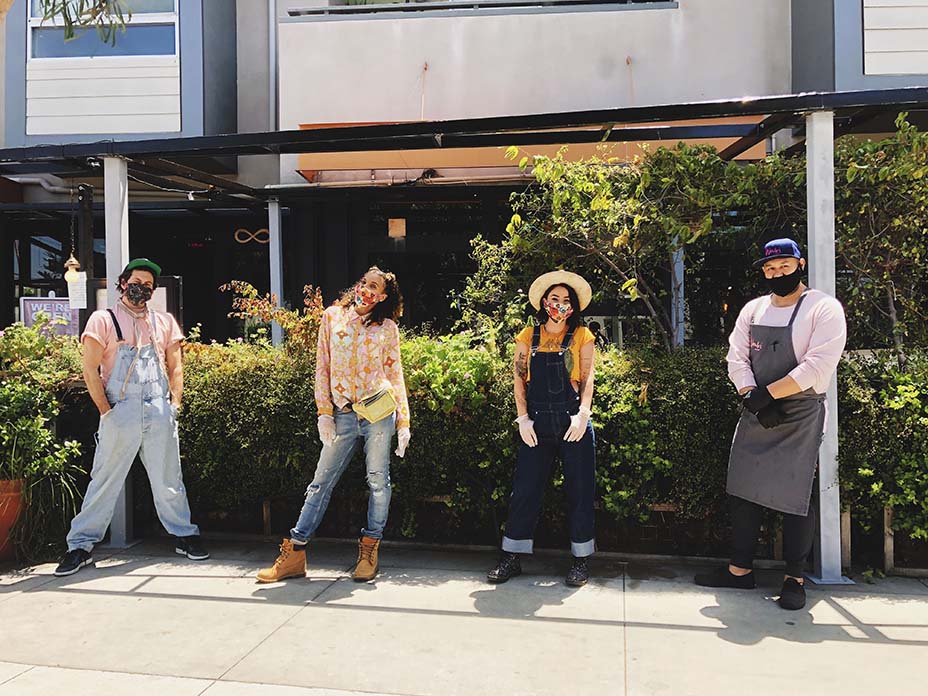 Executive chef Rain Pantana, general manager Brent Moon, assistant general manager Sterling Victorian and beverage director Leah Hendel are among the core staff that returned. Together with the owners and Moore, they made health and safety the priority by getting tested for the coronavirus, implementing “quarantine zones” in the restaurant, mask and glove mandates, temperature-taking schedules, no entry zones, no-contact payments and so forth. It’s not just a new normal, it is the only normal they’ve known, Moore says. Because it’s a new space, they’re also said to be having an easier time updating the floor plan and accommodating social distancing measures once dine-in dining is reintroduced.

Chef Rain’s Rain and Moon rolls have been especially popular — the latter is one of Moore’s favorite menu items. Hendel’s Spicy Margaritas have also been a hit as Wabi on Rose has taken advantage of relaxed liquor laws amid the pandemic that allow restaurants to serve and deliver mixed drinks. Also worth noting: Wabi on Rose has relaunched while also keeping an eye on those less fortunate by providing meals to unemployed hospitality workers along with prepping to deliver food to the nearby Venice Family Clinic staff.

“We are, hopefully, providing people with something that helps them get through what is obviously an incredibly intense and unusual time,” Moore continues, adding that the Wabi on Rose staff has been standing in front of the restaurant, wearing masks and properly social distancing while handing out laminated menus and promoting the business in the most organic of ways, including flowers and air hugs.

For Moore, who now serves as CEO of the gaming agency Sentinels, a firm that reps recent $3 million Fortnite champ Kyle Giersdorf, aka Bugha, his new venture sometimes delivers unexpected flashbacks. “Looking at the prior night’s report feels like looking over box office grosses — it’s that same bizarre dynamic,” Moore says. “How is this possible that we’ve done so much business? It’s a great start and all thanks to what they had built on Abbot Kinney and those in the community who welcomed Wabi back with open arms.”

Also crediting the community and its stable of regulars is Moon, who jokes that with a fire and now a pandemic, “all we need is a space invasion and we’d have successfully survived a full-on J.J. Abrams movie.” He acknowledges that the roller coaster journey has been “a lot” and after many tears shed, the response from the community has been the biggest motivator. “Mostly we’re grateful.”

"Time Is of the Essence": Wolfgang Puck on Why He’s Lobbying Trump for a Restaurant Industry Bailout