Continue to The Hollywood Reporter SKIP AD
You will be redirected back to your article in seconds
Skip to main content
May 20, 2020 9:00am
Logo text

Next week, the Steel Claw finally returns — which might mean nothing for those who have never heard of the Steel Claw in the first place. Thankfully, the fact that his comeback is drawn by The Walking Dead’s Charlie Adlard (and written by comedian, actor and novelist Charlie Higson) is more than likely to entice newcomers nonetheless.

The Steel Claw is a British pulp character who debuted in the Oct. 6, 1962, installment of British weekly comic anthology Valiant (no relation to the U.S. comic book publisher of the same name). Originally a villain, Louis Crandell was a scientist who lost his hand in a freak accident, only for it to be replaced by the steel claw of the series’ title. Later, an entirely separate accident meant that, if Crandell received a high-voltage jolt of electricity, he would become entirely invisible … with the exception of his steel claw. Of course, that meant he’d become a superhero — and sometimes a detective. Or a spy. He switched jobs a lot.

The character is one of a number being revived by 2000 AD publishers Rebellion in next week’s SMASH! 2020 Special, itself a revival of a comic anthology that ran in the U.K. between 1966 and 1971. Featuring contributions from creators including Rob Williams, Chris Weston and Tom Raney, SMASH! 2020 brings a number of classic British adventure heroes back for a 64-page anthology, dusting off some old favorites and breathing new life into them.

When it comes to the Steel Claw — whose solo adventures ended in 1973 — it falls to two Charlies, Higson and Adlard, to resurrect the character. THR talked to the two via email about the project.

What is it about the Steel Claw that got both of you on board this project? He’s a relatively obscure comic character who — with the exception of some cameo appearances in group projects — hasn’t really had a starring role since the early 1970s. Was this a character you both grew up with, or did you discover him some other way?

Charlie Adlard: I do remember the Steel Claw from my youth, but I can’t remember exactly where and when I might’ve read his adventures. To be honest, when Rebellion got in touch with me about drawing this, it was Charlie’s involvement that piqued my interest. Then, with the combination of that and the Steel Claw, which was a character I could see myself drawing, how could I refuse …?

Charlie Higson: He wasn’t so obscure back in the day. I was kind of aware of him when I was growing up in the ’60s — I guess I must have read Valiant now and then. Certainly the image of the steel hand feels very familiar, although there are probably loads of comics guys like him! I wouldn’t say I was any kind of super fan. I was a fan of Smash, though, and that’s why I wanted to be involved in this undertaking.

The thing is that British comics are very different to American ones. We had no “comic books” and no real equivalent of Marvel or DC — we still don’t. To most Brits, a comic is a large-format 24-page cheap, throwaway, newsprint magazine for young kids — mostly black and white, mostly comedy. Although they’ve pretty much disappeared now, in print at least, apart from maybe 2000 AD, which broke the mould in many ways.

You had one or two pages per character, and the daft ones would be interspersed with things like football stories, war stories and adventure stories, like the Steel Claw. It has to be said, British adventure comics writers of the ’60s were not in the same league as the Yanks, though.

Louis Crandell’s origin story as the Steel Claw both feels like an iconic pulp ideal — a lab assistant who lost his hand in an accident and gets a claw as a replacement! — and, at the same time, gleefully over the top. When you’re looking to revive a character like this, how do you choose what to lean into, and what to quietly disregard in the hopes of appealing to a contemporary audience?

Higson: I wanted to hark back to the ’60s in my story, and affectionately take the piss out of the earnestness of a lot of old adventure comics. Crandell may have started out as an evil villain, but he eventually ended up fighting for justice.

British heroes tended to be a bit lantern-jawed and stiff upper-lipped, slightly prim and humorless (this all changed with the arrival of the likes of Pat Mills and John Wagner in the ’70s). British action heroes didn’t have all the neuroses or complexities of American superheroes — they were always more Superman than Batman. I wanted this piece to have a retro feel and hark back to those days. I wanted an old-school Louis Crandell, rather than an updated, remade version with him as some kind of modern “dark” hero with a drug problem and uncertainty about his sexuality. I wanted it to be a celebration of old British comics.

Adlard: My initial response was also to go retro with it, but use the “retro” in a contemporary way. I like to think my style is fairly “modern,” so it’s the other elements I can add to give it a ’60s/’70s feel in a contemporary world. So I added a halftone effect and went a bit more crazy with the panels — both of which harken back to comics of the Steel Claw period.

Higson: I wanted to have fun with the daft criminal gang acronyms — instigated by Ian Fleming — that were much loved in stories of this nature in the ’60s and ’70s, like SPECTRE, SMERSH, UNCLE and in the Steel Claw’s case, FEAR — the Federation for Extortion, Assassination and Rebellion. But I felt that younger readers should still be able to enjoy it as a straightforward adventure story. So, I hope it works on several levels.

Adlard: Funnily enough, though, I decided to draw the strip digitally — obviously something that wasn’t an option back in the day — which, I suppose, gives it a more modern feel, but the real reason was that Charlie’s script was so dense, I felt going digital was a preferred option because I could basically fit everything in each panel!

Charlie A., this is some of your first published comics work since the end of The Walking Dead last year. You mentioned that it was the chance to collaborate with Higson that brought you on board the project, but is there a sense of it being a nice palate cleanser after more than a decade of working on the same project?

Adlard: I wouldn’t say Steel Claw was a [proper] follow-up to something that’s dominated my professional life for the past 15 years; it was a nice change of pace for a couple of weeks. That’s what it was. Not to dismiss the project, it’s part of an anthology, a great fun thing to do — and the opportunity to work with Charlie, of course.

Charlie H., this isn’t your first comics work, but you’re definitely more known for working in prose or writing for the screen. Have you a secret comics background that I’m embarrassingly unfamiliar with, or is this something of a novelty to be working on?

Higson: I used to write and illustrate a lot of comics when I was younger. Mainly for my own amusement, but they’d occasionally make it out into the wider world — I did a regular strip for the student newspaper at my university, for instance. But the things that most people in the U.K. will have seen of mine are a strip called Jelly Head I did for Viz Comic, and the graphic novel of my first Young Bond book (SilverFin) that I developed with the artist Kev Walker.

THR readers — really, Americans of all stripes — aren’t necessarily too familiar with the Steel Claw; what would you say to them to prepare them for your story? What do they need to know?

Higson: Any comic needs to speak for itself, I think! And, as you said before, probably not even that many U.K. readers will be familiar with the guy. I hope people can get where it’s coming from, though there are a few cultural references in it that might be lost on American readers — the Millennium Dome, Tony Blair — but, what the hell, I hope it’ll raise a smile on the mug of whoever reads it.

Adlard: It’s not very often I get to flex my comedy muscles. Even though the original was far from a comedy caper, this has its tongue definitely planted in its cheek. I mean, the simple image of a disembodied claw floating around, when Crandell’s invisible, looks ridiculous, so let’s lean into that for a 2020 spin on the character. 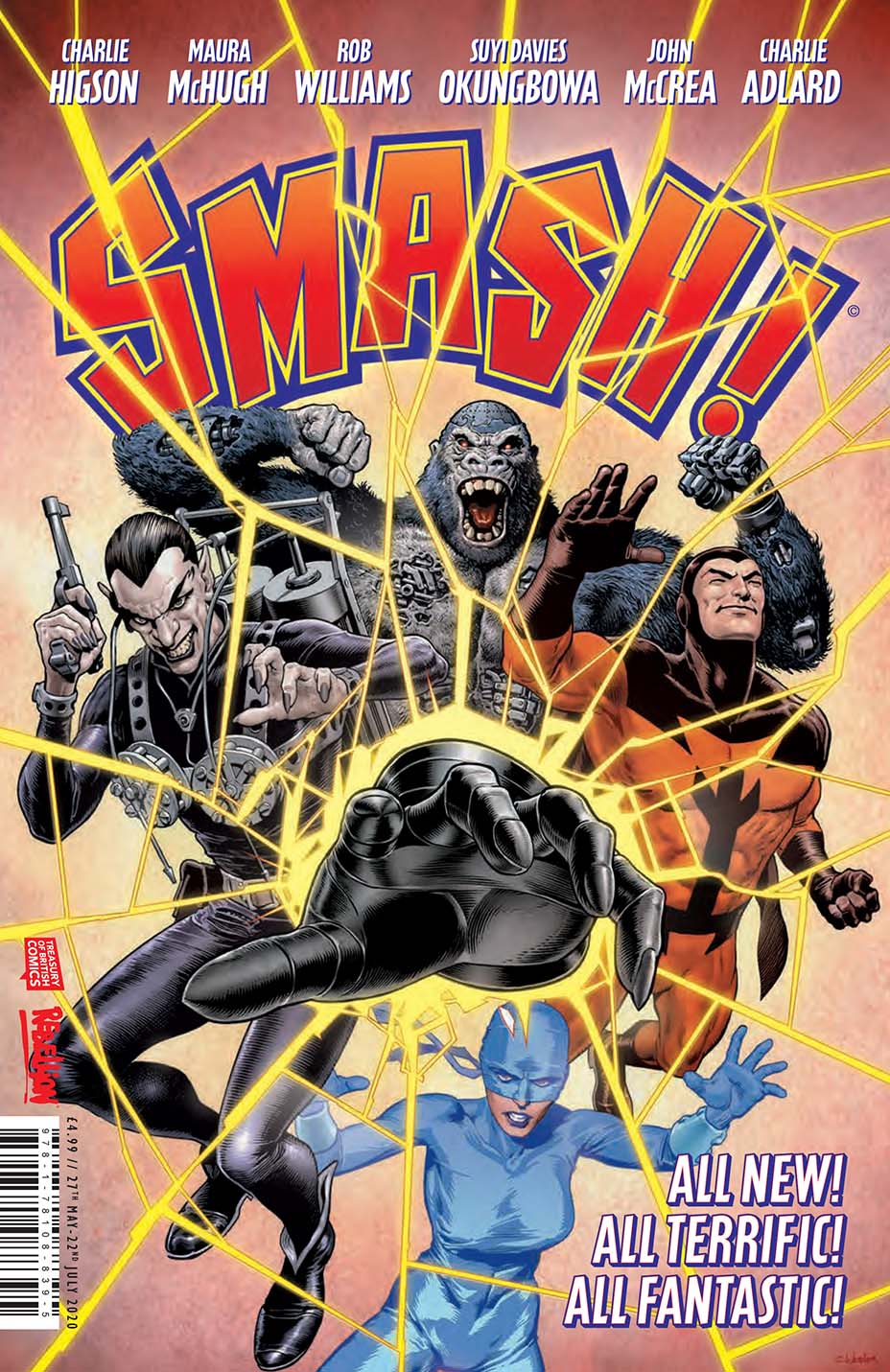 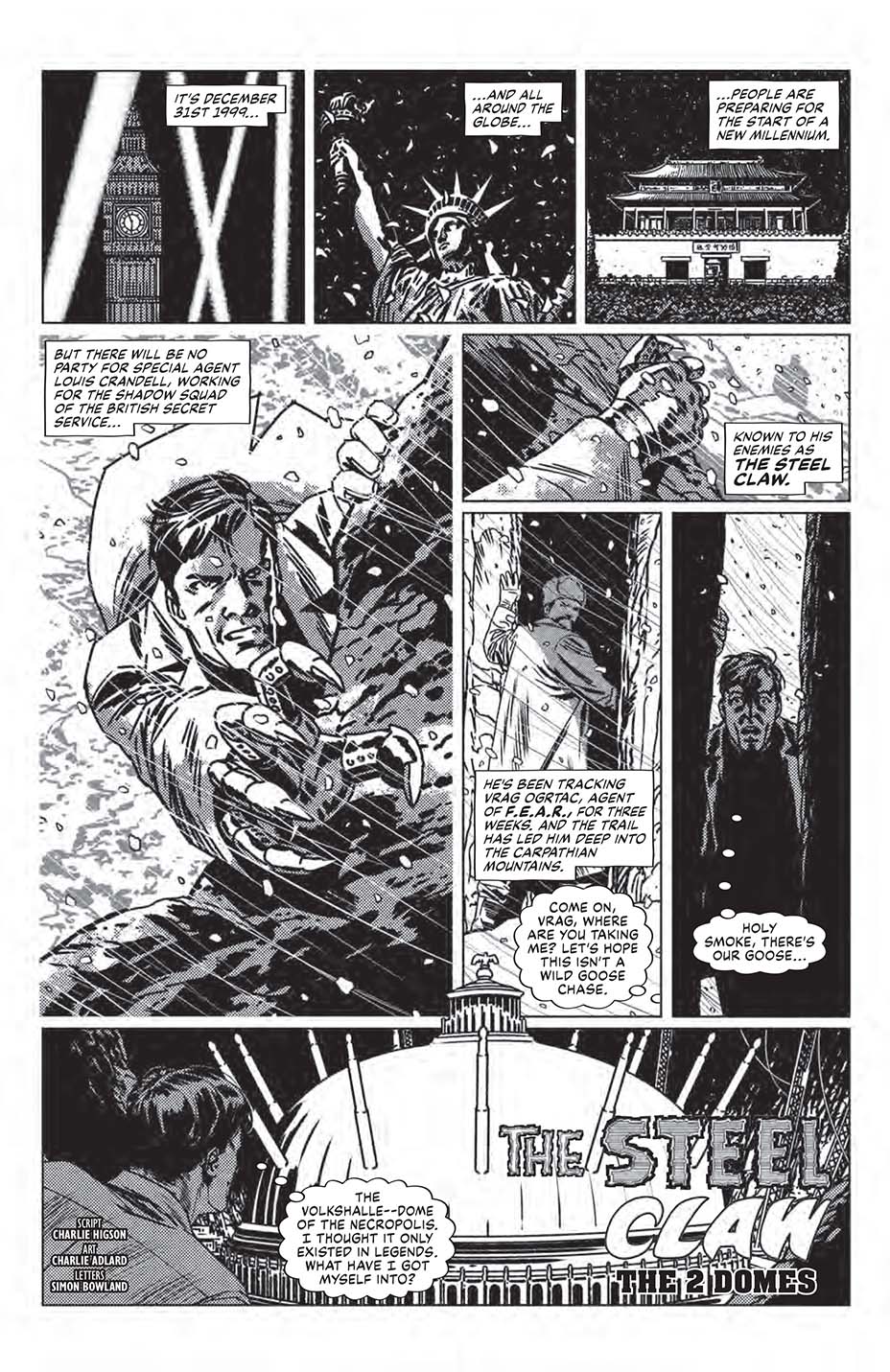 Interview has been edited for length and clarity. The SMASH! 2020 Special will be released digitally May 27. Above, Chris Weston’s cover for the special issue, and the first page of Higson and Adlard’s The Steel Claw.