Continue to The Hollywood Reporter SKIP AD
You will be redirected back to your article in seconds
Skip to main content
April 6, 2017 6:00pm

“Does anyone still wear a hat?” When Elaine Stritch deadpanned that rhetorical question in “The Ladies Who Lunch” from Company, it was a sardonic swipe at a breed of New York society matrons, imprisoned by appearances and running to keep one step ahead of extinction. That was 1970. In War Paint, which opens in 1935 and spans three decades, boy, do they ever wear hats. Chronicling the fiercely competitive rise and saddening fall of cosmetics titans Helena Rubinstein and Elizabeth Arden, this dressed-to-kill new musical looks back with mixed feelings on an era when style ruled and women were expected to be chiefly decorative.

The marquee draw is the dynamite pairing of Patti LuPone and Christine Ebersole, Broadway’s finest, in richly distinctive roles that play to their respective strengths. “Fire and Ice” is a divinely trashy-flashy number late in the show that signals the unstoppable rise of firms like Revlon with their down-market drugstore product, a shifting trend that catches both Rubinstein and Arden by surprise. But that song title might also describe the styles of LuPone and Ebersole, and their contrasting turns here are simply mesmerizing. If this review ends up unfinished, just assume I died and went to show-queen heaven.

The musical is an admiring feminist salute to two trailblazing entrepreneurs — the first women to head American corporations that bore their names — whose success was fueled in part by their rivalry. It would seem perfectly timed to follow FX’s juicy Feud, though War Paint is more notable for the distanced sparring of its glambitious animus. Despite the bellicose title, this is no wig-pulling, lipstick-smearing catfight. There’s delicious bitchery and barbs aplenty, but the more indelible takeaway is the poignancy of all that these women had in common.

Both were self-invented immigrants — one from a Polish shtetl, the other a Canadian prairie — excluded from the ranks to which they catered. Both refused to share credit with men at a time when women were underrepresented in the business world. Both got rich by telling women what they wanted before they knew what that was. And both were ultimately undone by their refusal to embrace change. 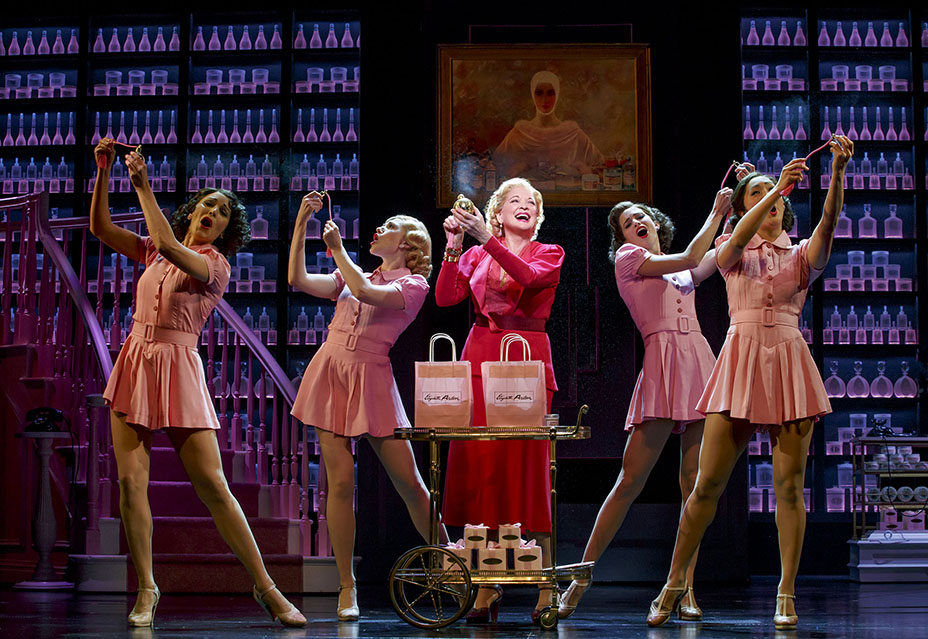 Doug Wright’s book for the musical (inspired by Lindy Woodhead’s dual biography of the same name and the 2007 documentary The Powder & the Glory) strains too late in the story for subtext by having the subjects wonder at the end of their careers whether they elevated or enslaved women. But despite its relatively low-key dramatic engine, this is a smart, sophisticated exploration of two uncompromising personalities, mavericks who helped to define the standard for female beauty in the mid-20th century, creating a boom market destined to grow and grow. And even though the sole face-to-face encounter depicted here is fictional, a current of prickly symbiosis runs through this musical, making it a fitting reunion of the creative team behind the superb Grey Gardens. In addition to Wright, that includes composer Scott Frankel, lyricist Michael Korie and director Michael Greif, all doing first-rate work.

The writers open with a tease of a prologue in which well-heeled ladies d’un certain age — dressed to the nines by genius costumer Catherine Zuber, and crowned in those head-turning hats — fret over the challenges of putting their “Best Face Forward.”

But in a nifty bit of construction showmanship, we then get the luxury of two legitimate opening numbers, democratically allowing both stars a splashy entrance. In “Behind the Red Door,” youthful “Arden girls” in rose-petal pink bustle about overseeing their customers’ beauty regimens until urgent whispers announce the impending arrival of the boss (“She’s coming! She’s coming!”), followed by Ebersole sweeping in at the top of the stairs with a self-satisfied, “She’s here!” In “Back on Top,” LuPone’s Helena, returning from an increasingly turbulent Europe, struts down an ocean liner gangplank swaddled in furs and proclaims, “It’s so wonderful to be back in Manhattan!” Worshipful applause greets them both, which is only fitting, since this is a show that knowingly exploits the place of its stars in the Broadway pantheon, no less than the history of its subjects.

It’s established early on that the two protagonists kept their distance, even forbidding the use of each other’s name in their presence. “That dreadful woman” is how Elizabeth refers to her rival, while Helena calls Arden “the other one,” responding with a curled lip to the suggestion she should make nice and go say hello: “The Ford should meet the Studebaker?”

One of the criticisms leveled at the show during its tryout run at Chicago’s Goodman Theatre last summer was the frustration of a narrative that seldom integrates the central antagonists. The creatives have worked to address that point by threading numbers throughout the show in which the women express parallel views in simultaneous songs, rather than alternating scene by scene. Among the standouts is “If I’d Been a Man,” in which they reflect on judgments they’ve had to endure and sacrifices they’ve had to make, fighting a constant battle to be taken seriously in spite of their success. 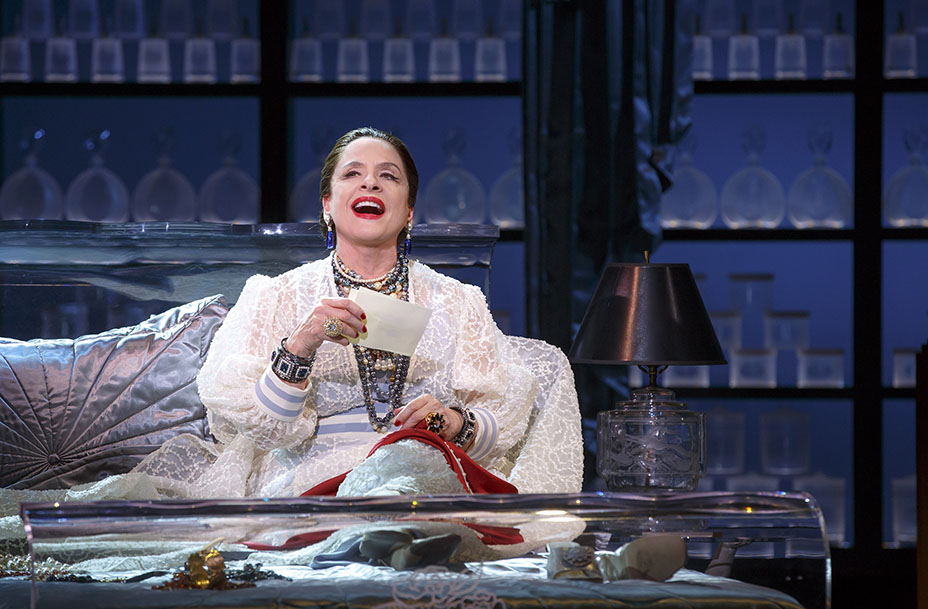 The two women have radically different approaches to the business. Arden is all about pretty packaging, customer pampering and WASP exclusivity, but precisely because she’s a working woman, she suffers humiliating rejection from the old-money society whose approval she craves. Rubinstein, who is shut out of certain circles due to anti-Semitism, emphasizes her scientific methods, wearing a lab coat at work although she has zero training in that field.

The writers mirror the similarities and contrasts in their subjects’ endeavors with humor and sensitivity, coming closest to a physical clash when corporate sabotage leads to a brush for each of them with the FDA. Lively comparison of their business savvy is made in “Necessity is the Mother of Invention,” in which both women launch new lines with patriotic campaigns during World War II. And when diversified competition in the postwar years eats into their profit margins, the book gently coaxes out the pathos of two pioneers being shoved aside by ruthless marketplace shifts and unsentimental company boards.

Just as each star is given her big opener, there’s a gorgeous symmetry, too, in their equally impactful back-to-back 11 o’clock numbers. In “Pink,” Ebersole pours melancholy irony into Arden’s realization that a color she doesn’t even like may be her sole enduring legacy. And in “Forever Beautiful,” LuPone sings with passion of the timelessness of art compared to the futility of their efforts to halt the aging process. In one of set designer David Korins‘ most stunning tableaus, portraits commissioned by Rubinstein from great artists descend around her during the number.

Wright then completes the emotional catharsis in the crisply played final scene that follows, inventing an encounter (a la Schiller’s Mary Stuart though more subdued) during an American Women’s Association gala at which, unbeknownst to each other, both women are being honored. The unspoken mutual respect that surfaces beneath their tart rapport is quite affecting.

While the ferocious LuPone gets many of the best lines, spitting them out in a thick Central European accent dripping with superciliousness, Ebersole’s dry delivery earns her an equal share of laughs, notably when rolling her eyes at the tacky competition. But these are no mere acerbic gorgons — they are fully lived-in characterizations of women who were visionaries and fighters, unapologetic about their ambition even when it was considered an unbecoming trait for their gender. 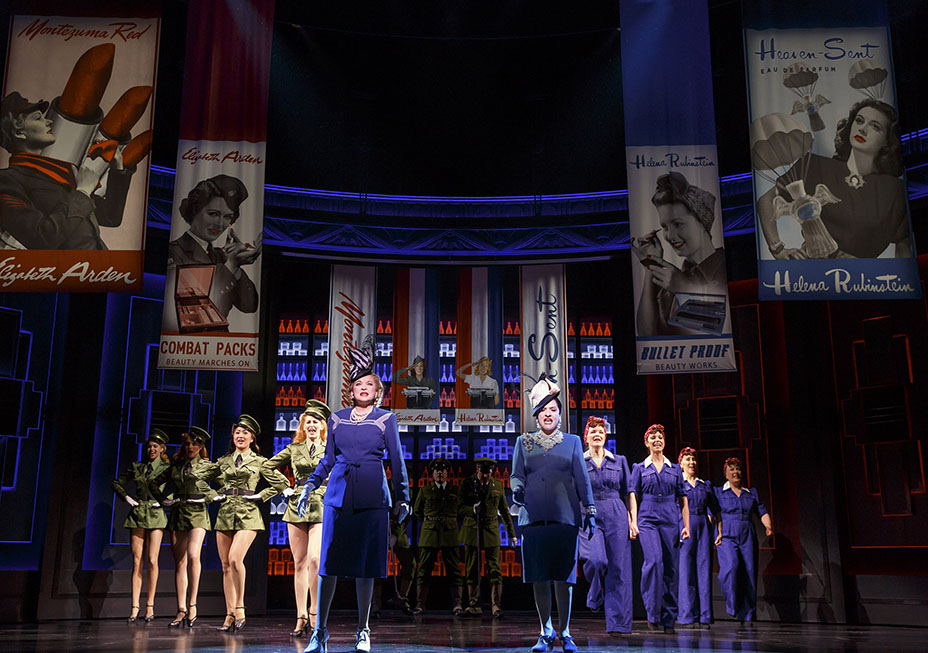 The leads get elegant support from John Dossett and Douglas Sills as their right-hand men and marketing gurus, both of whom bristle at being relegated to the background, causing them to forget their loyalty. But as good as the actors are, their second-act duet, “Dinosaurs,” a snide celebration of their former employers’ obsolescence, along with their own diminished positions, is one of the weaker numbers and begs to be cut. Its brash bitterness feels out of sync with the rest of the period-appropriate score, which strings together lush jazzy tunes with bouncy workplace numbers and songs of torchy introspection, enriched by Bruce Coughlin’s full-bodied orchestrations.

Director Greif keeps the multitasking ensemble moving through an evenly paced two-and-a-half hours, often with simultaneous or overlapping action in the two camps. He uses clever double-casting to point up the contrasts between each woman’s workforces.

The contributions of the design team cannot be overpraised. Zuber is among the very best when it comes to retro glamour, and this production trots out one eye-popping outfit after another. Korins‘ sets use deco panels to handsome effect, creating a sumptuous pink retreat for Arden’s salon; a royal receiving room for Rubinstein’s boudoir, where she holds business meetings from a massive Lucite-frame bed; and a plush upper-crust hangout for the St. Regis, where both women go regularly to dine on twin banquettes that provide fanciful opportunities for eavesdropping on each other’s secrets. The visual masterstroke, however, is the rear wall of potion bottles, through which lighting magician Kenneth Posner filters signature colors — pink for Arden, of course; white for Rubinstein; and even red, white and blue for the wartime number.

Some no doubt will find the show lacking in dramatic momentum or explosive conflicts. I found it thoroughly compelling and masterfully entertaining throughout. It’s an intelligent, character-driven musical about two innovators motivated as much by their own exacting standards as by the spirit of fierce competition between them. And it’s been given a suitably deluxe production co-piloted by two star turns for the ages.