During sport’s biggest night of the year, Super Bowl LIV, President Donald Trump debuted the first of two campaign ads on Sunday and also turned to Twitter, as he often does, to share his opinions. He tweeted twice before the game started.

Trump’s first tweet announced he had a Super Bowl interview that would air at 12:30 p.m. PT on Fox. “Enjoy!” he added at the end of that tweet. Then three hours later, right before the game started, the president tweeted in all capital letters, “Enjoy the game USA, our country is doing great!”

In a third tweet, Trump referenced his Super Bowl commercial, writing, “I promised to restore hope in America. That includes the least among us. Together, let’s KEEP AMERICA GREAT!” He then prompted people to text TRUMP to 88022 if they liked the ad.

The Black Keys, Jason Derulo to Perform at NFL TikTok Tailgate Ahead of Super Bowl

I promised to restore hope in America. That includes the least among us. Together, let’s KEEP AMERICA GREAT!

Text TRUMP to 88022 if you liked our Super Bowl ad! pic.twitter.com/Lgjt53B7QX

The ad, which aired during the first quarter and was the first of two 30-second Super Bowl spots for Trump, focused on criminal justice reform. It features Alice Johnson, who was granted clemency in 2018 after Kim Kardashian West urged Trump to do so. “My heart is just bursting with gratitude. I want to thank President Donald John Trump,” Johnson said in the spot.

Johnson also addressed the ad from her personal Twitter, noting that two Super Bowls ago, she was in prison, and today she is a free woman who will never stop “fighting for the wrongly and unjustly convicted.”

Two Super Bowls ago I was sitting in a prison cell.

Today I am a free woman and my story was featured in a Super Bowl Ad.

I will spend the rest of my life fighting for the wrongly and unjustly convicted!

West retweeted Johnson’s post about her new life since prison and added, “So proud of you!!!!” but did not directly comment on Trump’s ad.

The president took to Twitter one last time on Super Bowl Sunday to congratulate “the Great State of Kansas” on their big win, which he quickly deleted and tweeted again with the proper state of Missouri, where Kansas City actually is. Here’s a screenshot of the erroneous tweet: 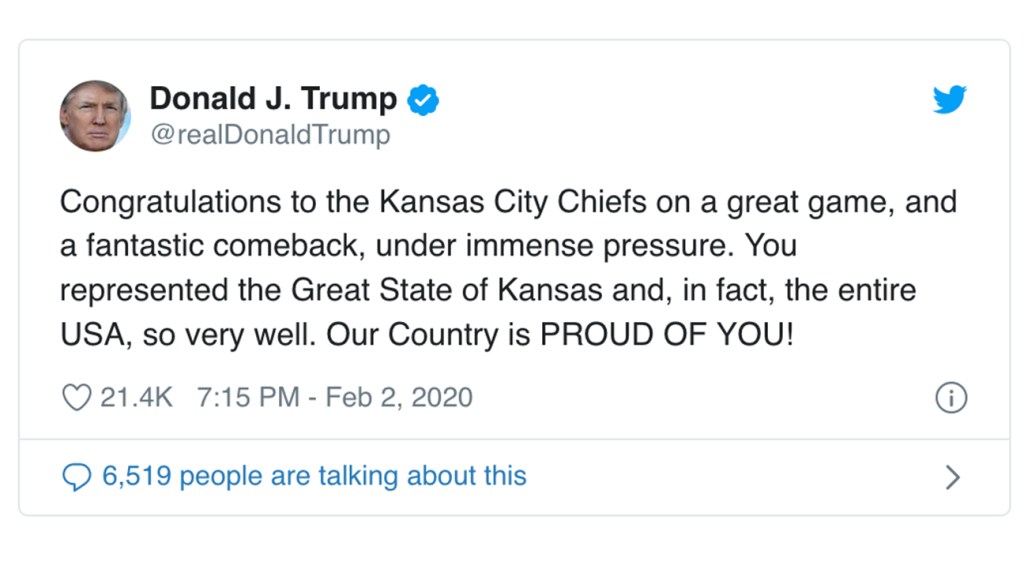 Congratulations to the Kansas City Chiefs on a great game and a fantastic comeback under immense pressure. We are proud of you and the Great State of Missouri. You are true Champions!

Over the years, Trump has made it his purpose to tweet at least once during the big game. Shortly after his inauguration in 2017, during Super Bowl LI, the president tweeted, “Enjoy the #SuperBowl and then we continue: MAKE AMERICA GREAT AGAIN!” The following year, he congratulated the Philadelphia Eagles on their “great Super Bowl victory!”

Most recently, in 2019, Trump gave a shout-out to Bob Kraft, the CEO of the New England Patriots, as well as head coach Bill Belichick and quarterback Tom Brady for their great season and making it to the Super Bowl.

The Kansas City Chiefs and the San Francisco 49ers battled it out for the Vince Lombardi Trophy during Super Bowl LIV, which took place at the Hard Rock Stadium in Miami. The Chiefs won by a score of 31-20.