What a pleasure to see improv queen Elaine May, erstwhile half of a legendary comedy double-act with Mike Nichols, back on Broadway after 50-plus years at 86, her timing as sharply idiosyncratic as ever. Even for those of us who know her acerbic style only from recordings, movies and playwriting, there’s a special satisfaction in watching this influential humorist perform. She’s alternately funny, maddening and heartbreaking as a longtime Greenwich Village fixture whose mind is deteriorating faster than her body in Kenneth Lonergan’s The Waverly Gallery.

While the minor-key 1999 memory play is not the most profound work of this keenly observant writer — who won a well-deserved 2017 original screenplay Oscar for Manchester by the Sea and more recently penned an enthralling TV remake of Howards End — it’s probably his most personal, inspired by the cruel decline of his grandmother as she suffered the indignities of Alzheimer’s disease.

The playwright’s inextricable investment in the work is obvious from his surrogate character Daniel, played by Lucas Hedges in his Broadway debut. Daniel opens the play in the middle of a frustrating conversation with his grandmother Gladys (May), and closes it with a monologue in which he memorializes her while also paying tribute to the heroism of his mother Ellen (Joan Allen), who cared for the dying woman through her agonizing final years. It’s a lovely speech of piercing simplicity and emotional candor, though elsewhere in the play, Lonergan overuses direct address, a flaw magnified by Hedges’ flat stiffness in those scenes.

The actor, so terrific in Manchester by the Sea, is far more persuasive when he has someone to play off, in the many fraught family exchanges that give The Waverly Gallery its texture. The play strikes a delicate balance between depicting the pitiless ravages of dementia in a once-formidable woman and showing its heavy toll on those closest to her. 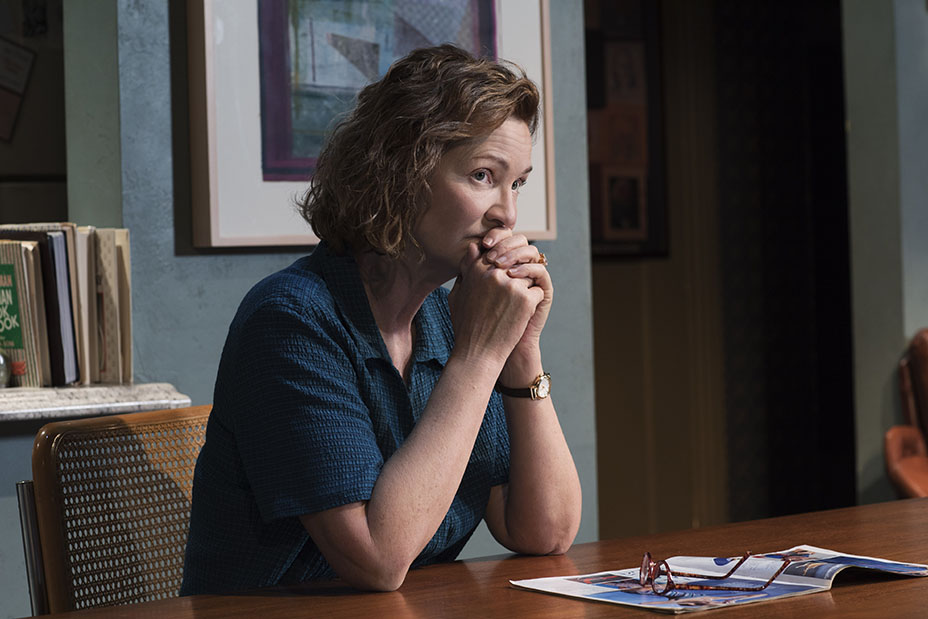 Lila Neugebauer, making an assured Broadway directing debut, is especially skilled at this type of ensemble work. She’s alert to every shifting response from the family to Gladys’ dottiness and endless repetitiveness — from sly amusement through eye-rolling impatience, and from explosive anger to guilt, shame and abject pity.

In the superlative production of Sarah DeLappe’s The Wolves that put her on the map, Neugebauer showed herself to be a maestro at conducting overlapping dialogue, a factor no less essential to Lonergan’s play. The flurrying counterpoint notes of humor and tension around the dinner table in the Upper West Side Manhattan apartment of Ellen and her husband Howard (David Cromer) are what gives the play its nervous rhythms, along with Gladys’ seesawing between nattering obliviousness and confused panic.

The establishing scenes are played chiefly for comedy, introducing Gladys and Daniel in the tiny art gallery off Washington Square that she has run for many years. She’s a chatty former lawyer, once involved in hard-line left-wing causes, and he’s a reticent speechwriter for the Environmental Protection Agency, though she’s convinced he works for a newspaper and he eventually stops correcting her. The combination of her poor hearing and progressive memory loss makes conversation with Gladys a trial, prompting the occasional tetchy reply from Danny. But mostly she just prattles on, more in need of an audience than an interlocutor.

Daniel is a smart but somewhat diffident guy with zero luck in relationships, and the motif of two people communicating on entirely different wavelengths carries over into his other exchanges in the play, too — with his frazzled mother or his sarcastic stepfather, as well as with Don Bowman (Michael Cera), the penniless working-class Boston artist whose paintings are the last to hang in Gladys’ gallery.

Scene changes are accompanied by Tal Yarden’s evocative projections of New York street scenes from decades past, set to composer Gabriel Kahane’s warmly melodic music. These serve to remind us that the woman slipping into a haze of scrambled memories was once a vital part of a community. Even when Gladys is at her most trying, the charming, elegant, feisty social butterfly she once was is still in there, and May subtly indicates the valiant effort she makes to hold onto that. Unwelcome changes in the Village are one of her constant refrains, perhaps allowing her to focus less on dismaying changes within herself — to the extent that she’s aware of them. 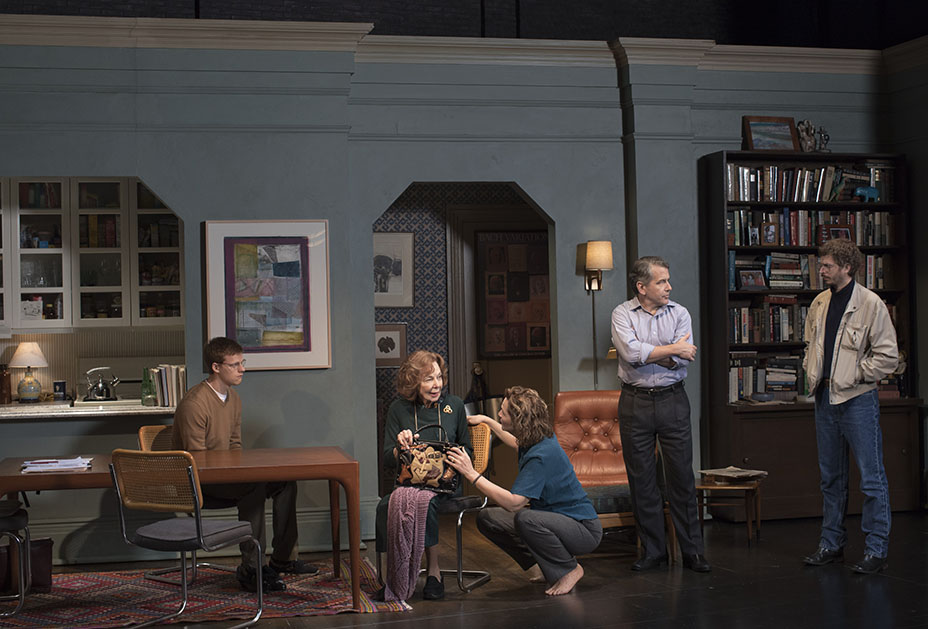 Lonergan marks Gladys’ steady downward spiral with signposts that will be painfully familiar to audiences who have dealt with aging parents or relatives, whether suffering from dementia or not.

Her stubborn denial is quietly wrenching once word arrives that the building owner intends to shut down the gallery, and Gladys insists she can go back to working at a law firm if necessary. But May is most shattering when her chipper garrulousness falls away into deepening anxiety — “Why are you so angry?” she keeps asking Ellen — and then outright terror of abandonment, before lapsing into complete absence as she retreats further and further into the past.

Seeing Gladys at her lowest point amidst the boho-clutter of her own apartment — designed in loving detail by David Zinn, and draped in melancholy light by Brian MacDevitt — with its walls and shelving covered in a lifetime of collected art, makes her diminished state all the more mournful.

Ellen’s frayed nerves, her mounting despair and outbursts of extreme irritation are equally moving, played by the estimable Allen in a standout performance of tremendous raw feeling and sorrow. A moment in which Ellen expresses her wish that her mother would just die peacefully in her sleep is haunting because Allen utters the words without placing any great weight on them, somehow underscoring Lonergan’s infinite compassion for the character.

Howard is more of a sideline figure, helping out where he can, and preoccupied with worries about his own elderly parents. But Cromer, who won a Tony Award this year for his direction of The Band’s Visit, is such a strong presence it makes you wish he took on more acting roles. 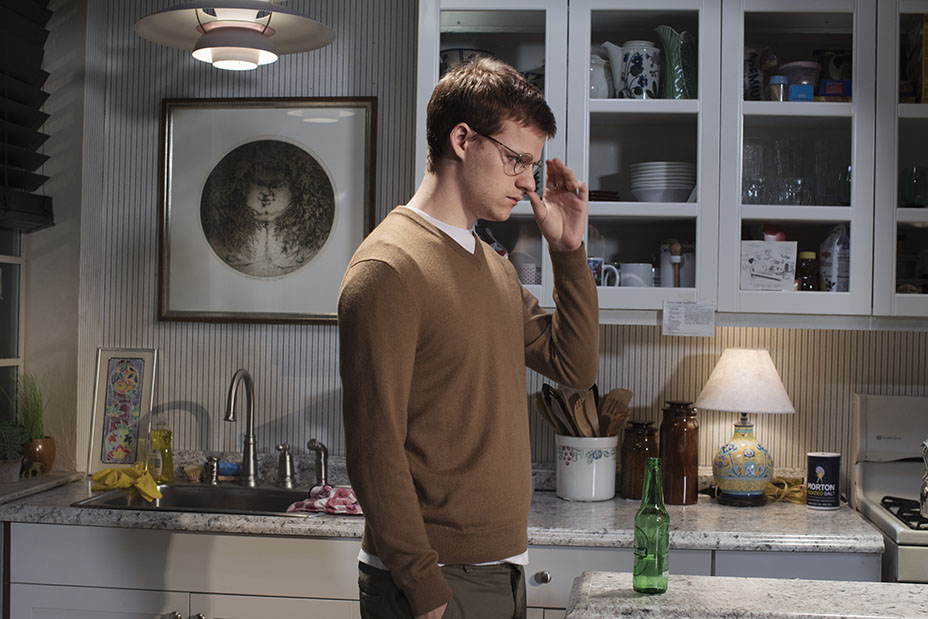 This marks Cera’s third consecutive time on Broadway in a Lonergan play, following This Is Our Youth and Lobby Hero, and the actor clearly has an affinity for the playwright’s frequent themes of loss and fear, emotional wounds and regret, along with his peerless ear for naturalistic dialogue. Cera plays down his customary tics here, and yet he makes Don a classic Lonergan character — an intrinsically awkward sad sack who strains to maintain an optimistic front. His refusal to acknowledge that the opening of his show at Gladys’ gallery has been pretty much a disaster — “I’ve been waiting for this day my whole life” — is quite touching. As is his embarrassment at being witness to a family in crisis. Cera’s performance is all the more effective for being so understated.

Neugebauer handles the gradual modulation from light comedy to searing pathos with confidence. But the play’s inevitable limitation is that there’s only one direction it can go. In that sense it suffers slightly from the proliferation of dramas dealing with Alzheimer’s and other forms of dementia in the years since it was first produced, the majority of them centered on women.

In movies, the path has been traced in affecting performances by Judi Dench in Iris, Julie Christie in Away From Her, Julianne Moore in Still Alice and Blythe Danner in the current release What They Had, to name a few. TV viewers watched Kate Burton as a surgeon diagnosed with early onset Alzheimer’s on Grey’s Anatomy. Laurie Metcalf played a brilliant scientist succumbing to neurological degeneration on stage in The Other Place, while in both the original play and the exquisite film adaptation of Marjorie Prime, futuristic technology was used to shore up the eroding memories of Lois Smith’s character.

As the baby boomer generation hit their mid-60s, this theme is only going to become more relevant, though that doesn’t make it less of a downer. But familiarity aside, The Waverly Gallery has been given a sensitive, for the most part beautifully acted production that honors the playwright’s very personal stake in this quotidian tragedy.