Arjun Bhasin says working on After the Wedding, the recently released film starring Julianne Moore, Michelle Williams and Billy Crudup and directed by Moore’s husband, Bart Freundlich, ranks among his most enjoyable experiences as a costume designer.

“Julianne and Bart created a set that really felt like a family,” Bhasin tells The Hollywood Reporter (Moore and Freundlich are also producers on After the Wedding, a gender-swapped remake of a 2006 Danish film starring Mads Mikkelsen). “Often when you work on an independent film, with its tight schedule and the challenges of the budget, you end up developing a close-knit bond with everyone. And I really value the work of Michelle and Julianne and Bart and Billy. It’s such a high level of talent, you’re only too happy to put your name in the mix with those people.”

After the Wedding is the story of two women who meet to discuss a philanthropic donation, though their connection may extend beyond that mutual interest. Moore plays Theresa Young, a New York-based media mogul who is considering her support of the Calcutta orphanage run by Isabel, played by Williams.

“Most actors who are invested in a character come with ideas, and then I have my own ideas, and we sort of battle it out,” Bhasin says of collaborating with Moore on Theresa’s look. “Julianne puts so much work into everything she does, and she’s really adept at making a character feel complete. She’s always very sure of what she wants to say, so it was great to take cues from her.”

Bhasin says he started with the idea of solid colors that felt luxurious but understated. “The color palette of Theresa’s clothes is very Rothko-esque: solid blocks of color and no prints, to show everyone that she’s very firm in her beliefs and has a clear state of mind,” he explains. “Her taste is exquisite but uncomplicated. The basis of her entire look is that we wanted her to look rich, we wanted her to look powerful, but she was serious about design, and she does nothing in a frivolous way.” 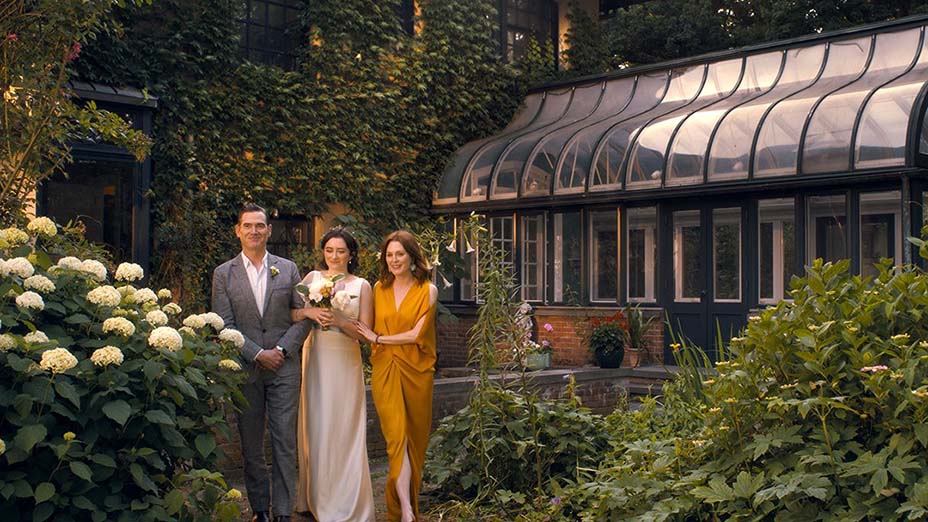 Moore and Crudup play a couple whose daughter, played by Abby Quinn, is getting married at their Oyster Bay estate, a stunning home with lush landscaping and gardens that was secured by location manager Jillian Stricker. Bhasin pulled several pieces for Moore from New York-based label Zero + Maria Cornejo, including a marigold-hued gown from Cornejo’s Resort 2017 collection for the wedding scenes.

“I love her work,” Bhasin says of Cornejo. “She uses color, texture and shape so beautifully, creating pieces that are contemporary yet also very classic. I saw that gold dress Julianne wears for the wedding on Maria’s runway and wrote to her, and she very kindly obliged. It’s a beautiful, statuesque piece and spoke a lot to Julianne and me. Her character isn’t afraid to make a statement at a wedding in something that’s luxurious while also being quite simple.”

As a “friend of the house” of jewelry brand Chopard, Moore used her connections to secure high-jewelry pieces, crafted of sustainable materials, to accessorize her character’s look. “I’ve never worked with high jewelry before, so I felt very lucky that Julianne had a relationship with Chopard and that they were willing to come onboard,” Bhasin says. “There was something very bold about the designs and very graphic — they read successful and tasteful, but also a bit cool and funky.”

“When [Julianne] approached us about lending jewels for this project with Bart, I said, ‘Of course!’ She’s practically family to us,” Caroline Scheufele, Chopard’s co-president and artistic director, tells THR. “She has been such a great champion of our journey to sustainability and has even helped design some pieces for our Green Carpet Collection.” 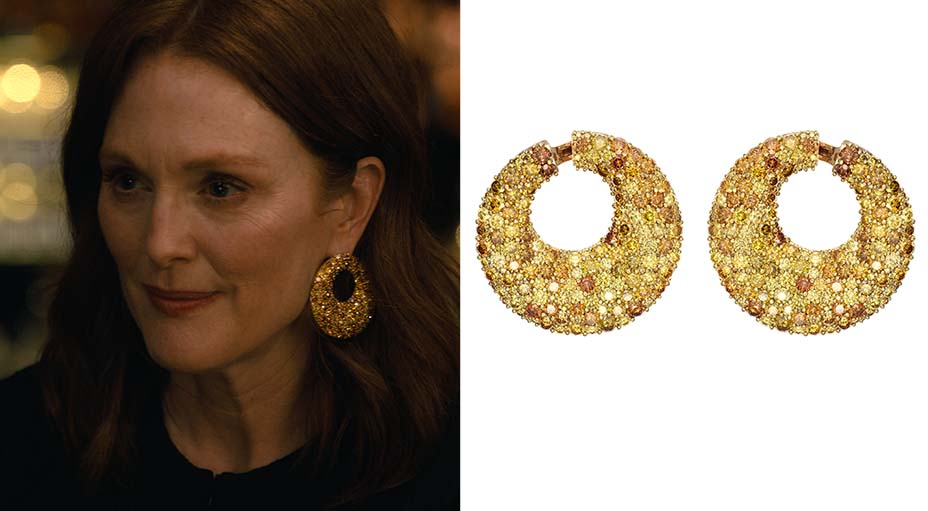 “The yellow-diamond earrings had been in Shanghai on another actor for another event, but Chopard went above and beyond to get them to us in time,” he says. “They really got swept into the filmmaking process. For continuity, some scenes take place in five different locations over several days, and these pieces came with their own security guards. It’s a real commitment for everybody.”

“This film is really about the choices that women have to make when they’re in positions of power, and sometimes it’s not as easy as you might think it’s going to be,” Bhasin says. “Julianne’s character is strong and powerful, but she’s also practical and feminine and fashionable, and that’s why those [accessory] choices were made. She wears a watch that’s beautiful, but it’s also a bit serious, and we also specifically wanted that Puzzle bag. There’s something almost Japanese about its construction — it’s modern and graphic and says luxury without screaming a logo.”

The result is an overall look that is also meant to markedly contrast with Williams’s Isabel, Bhasin notes. “The idea of Michelle’s character is that she’s been living in India and running this orphanage, so the elements of her wardrobe are comfortable for warm weather and practical for her to work in, and then she’s thrown into this society-wedding scenario, and she has to make do with the things she’s brought,” explains the designer, who sourced the fabrics for Williams’s costumes in India. “She’s out of place in this world, so her fabrics are completely different. Julianne is in crepes and silks and duchesse satins, while Michelle is in cottons and linens and Eastern-influenced colors. And I think her jewelry consists primarily of prayer bracelets from India. Everything about their style sends a message that these are two very different women.” 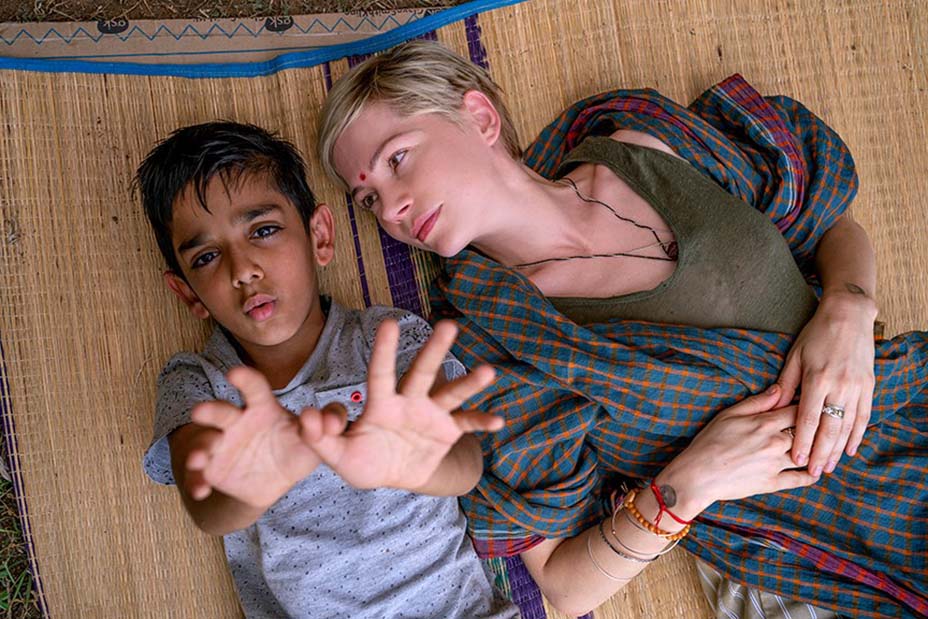 Among Bhasin’s upcoming projects: He’s currently in India filming a BBC series adaptation of Vikram Seth’s 1993 novel A Suitable Boy with Mira Nair, with whom he also worked on 2006’s The Namesake. And this fall, Bhasin’s costume designs will be seen in A Beautiful Day in the Neighborhood, the Fred Rogers biopic starring Tom Hanks, set for a Nov. 22 release.

“I finished [After the Wedding] and went straight off to do the Rogers film with Tom Hanks, which was a different experience only because I grew up in India, so I didn’t grow up with [Mister Rogers’ Neighborhood],” Bhasin says. “I don’t have any nostalgia for the show, but all my American friends get really tearful when they talk about it. Of course, my work is never objective; I always get really involved in the world of the film. That’s one of the things I loved about working with Julianne [on After the Wedding]. I’m all about colors — I’m Indian, and I love to live in a colorful world.”