My grandfather would have loved the scene.  Boldfaced names from Hollywood and Washington gathered on Dec. 14 at the Newseum — the D.C. shrine to the profession that made him an American icon — for the premiere of Steven Spielberg’s new movie, The Post. The crowd was eclectic. There was Jeff Bezos next to Warren Buffet, Diane von Furstenberg next to Daniel Ellsberg (the whistleblower who leaked the Pentagon Papers), CNN’s Wolf Blitzer next to CBS’ Major Garrett and Tom Hanks right next to Meryl Streep. Hanks plays the man the nation knew as the great Washington Post editor Ben Bradlee; my siblings and I just called him Grandpa. And Streep plays Grandpa’s boss, the late publisher Katharine Graham.

Ben Bradlee was no saint and no church mouse. He was gruff — a teddy bear at heart, but intimidating — he didn’t kiss boo-boos or make sock puppets. I grew up in a Cambridge, Massachussetts cul-de-sac; he lived 400 miles away in a Georgetown mansion once owned by Abraham Lincoln’s son. I played with Barbies and Cabbage Patch dolls while he dined with presidents and princes, diplomats and demagogues. Watergate, as far I was concerned, was a theme park with rafts and a wave pool.

Steven Spielberg and Meryl Streep on Trump, News and Why 'The Post' Had to Be Made Now: "Everyone I Know Is Scared"

Childhood summers meant visits to Long Island, where Grandpa and my step-grandmother, author Sally Quinn, had a home in East Hampton. It was years before I realized that their house — Grey Gardens — was known to cult movie fans around the world. The legends of spirits that kept my cousins and I up at night, and the vague smell of cat pee that wafted when it rained? Lingering mementos from Jackie Kennedy’s aunt and cousin, Big and Little Edie Beale — the eccentric duo frozen in time thanks to the 1976 Maysles Brothers documentary and subsequent HBO movie and Broadway musical.

Hollywood connective tissue ran deep at Grey Gardens. The neighbor across the street? Acclaimed writer and director Nora Ephron. Nora’s ex-husband? Carl Bernstein of Woodward and Bernstein fame. When Woodward and Bernstein’s book All The President’s Men was made into a movie, Jason Robards won an Oscar for playing Grandpa. When Ephron’s novel Heartburn, based on the breakdown of her marriage to Bernstein, was made into a movie, Meryl Streep played the Nora character. Tom Hanks — around whom swirls well deserved Oscar buzz for his portrayal of Grandpa in The Post — endures in blockbuster history as a favorite of Ephron’s and Grandpa’s other Hamptons neighbor, Steven Spielberg. But such was the life of Ben Bradlee, a giant intersection of politics and pop culture — and all roads lead to The Post.

While parts of Hanks’ performance were quite different than the Grandpa I knew, there were certain scenes that were stunningly accurate and left me full of emotions. Calling Mrs. Graham and reinforcing in his trademark bullish tone what a fundamental failure it would be if The Washington Post failed to publish the Pentagon Papers is an example. “If we don’t publish them… We will lose… The country will lose.”

When it was time for me to choose a college, there was no denying Washington was in my DNA. Georgetown University was my top pick and it was a no-brainer; my relationship with Grandpa was coming full circle. The proximity of campus meant I could visit him often, which I was thankful for, but he was getting up there in age and the dementia was harder to hide. His braggadocious sailor strut was now a frail shuffle. His ruthless sarcasm less ruthless. But there was still that Ben Bradlee magic in his eyes — indefatigable in life, always flirtatious and immortalized on the big screen exercising his favorite right, his favorite religion — the First Amendment.

As I sat with my family among the VIPs gathered at the premiere of The Post, I could only imagine what Grandpa would have thought. He died in 2014, more than four decades after he and Mrs. Graham published the controversial Pentagon Papers. Would he ever have believed that all these years later that their high-stakes decision would be re-created by Hollywood’s foremost director and two of its biggest stars? I can just hear his loveable raspy bark, echoing along the Potomac: “God, the fun.”

Kim Masters on Ben Bradlee: What the Legendary Washington Post Editor Taught Me 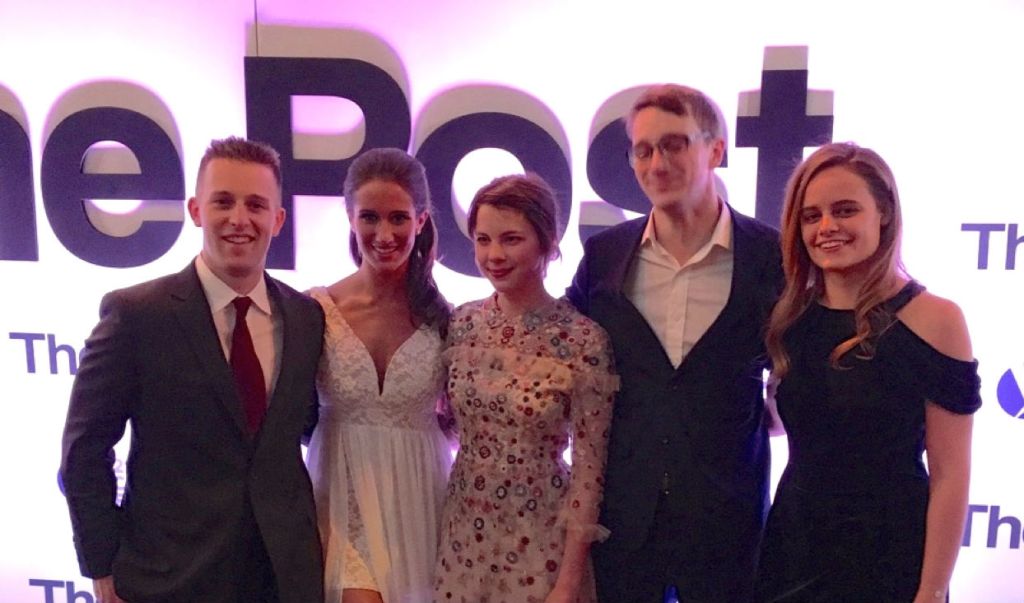