Bob Iger watched Hulu’s 2008 launch from the sidelines, as Disney refused to join the parent companies of NBC and Fox in the streaming service until the following year. But his long game paid off May 14 when Disney gained full operational control over Hulu in a deal that maps out a new future for the long-challenged joint venture once dubbed “Clown Co.” by its digital rivals.

Now, for the first time in its 12-year history, Hulu has a single corporate parent. And while top brass is still hammering out details of how it will be integrated with other direct-to-consumer offerings, Disney expects to grow Hulu into at least a $27.5 billion business by 2024.

Hulu’s name is often rattled off alongside Netflix and Amazon as one of the dominant streaming services in Hollywood, but, in reality, it has long made do with fewer resources than its rivals. As a domestic-only platform, its $2.5 billion programming budget is a fraction of what Netflix spends annually on content, and Hulu has relied on its owners to support its losses, expected to peak at around $1.5 billion this year. As a division of Disney, Hulu will have access to programming resources, an international infrastructure and a marketing playbook that could accelerate its subscriber base, which hit 26.8 million at the beginning of May.

Speaking at an investor conference an hour after news broke that Disney had agreed to a five-year plan to buy out Comcast’s 33 percent interest in Hulu, Iger ticked off several opportunities, including launching Hulu abroad and bundling the service with Disney’s other new offerings, Disney+ and ESPN+. Iger’s talk of “synergies” — he posited that ad sales and technology could eventually be consolidated — suggests cuts may be coming as Disney brings Hulu into its streaming business.

“We’ve sized synergies,” Iger admitted, “but we’re not being specific about it.” Even so, BTIG media analyst Rich Greenfield downplays the impact as “probably a rounding error” compared with the thousands of employees expected to be laid off following Disney’s purchase of the majority of the 21st Century Fox assets.

One area where things are already being streamlined is Hulu’s corporate operations. CEO Randy Freer now reports directly to Kevin Mayer, chairman of Disney’s direct-to-consumer and international division. Comcast also has relinquished its three seats on the Hulu board. When it was made up of rival executives, that governing body was known to complicate decision-making, though people who work with Hulu say that programming decisions have moved more quickly since Disney acquired Fox’s 30 percent stake and became Hulu’s majority owner.

The most visible changes at Santa Monica-based Hulu will likely be in the programming on the service, which offers both on-demand and live content depending on how much a customer wants to pay. Though it has a stable of originals — including Emmy winner The Handmaid’s Tale and George Clooney starrer Catch-22 — its output has been less frequent than that of Netflix, known for dropping a new series (or three) each Friday.

But the number of originals is expected to grow, with programming oriented around, per one well-placed Disney insider, being an “older, broader, edgier” streaming counterpart to family-friendly Disney+. Executives also are telegraphing increased alignment between Hulu and the newly acquired FX brand. “The possibilities of a platform like Hulu, which has so many more subscribers [than FX’s stand-alone service], is much more exciting than trying to scale up on our own,” network CEO John Landgraf said ahead of Disney’s May 14 upfront presentation.

Executives at outside studios say they expect Hulu to eventually begin holding on to global rights to its originals as it plots an international rollout. Meanwhile, Hulu, which has not traditionally produced its own shows because it doesn’t operate a studio, now can take advantage of its relationship to corporate siblings under the Disney Television Studios banner.

Already it was the beneficiary of a change in direction of ABC Signature’s High Fidelity, which was originally intended for Disney+ but moved to Hulu after Zoë Kravitz was cast as the lead. “You could see more of that,” suggests the executive. “I don’t think that’s the intention, but it’s one of the nice outcomes of having a company with four different networks and two different streaming services.”

Disney’s deal with Comcast, meanwhile, guarantees that Hulu will remain a destination for next-day current broadcast programming and library fare. NBCUniversal has agreed to re-up its licensing agreement with Hulu through 2024, though it has carved out the right to also stream those shows on its own platform after it launches in 2020. Hulu has a multiyear licensing deal to keep Fox Corp. programming on its platform, too.

But Hulu also will need to plot a future without that third-party programming, especially after NBCUniversal no longer has an ownership stake in the business and, thus, less of a financial incentive to keep its top shows on the platform.

While that might pose a challenge for Hulu, some are viewing it as an opportunity. “We see the commitment from Disney to Hulu as a very nice beacon for the independent film market,” says Alphonse Lordo, who works with clients like Spyglass Media as managing director of banker SunTrust Robinson Humphrey. But with licensing deals currently in place, it will be a while before Hulu must address holes in its offering. “Hulu will remain a cord-cutter’s dream for at least another few years,” says Greenfield. “It feels like a win-win overall.” 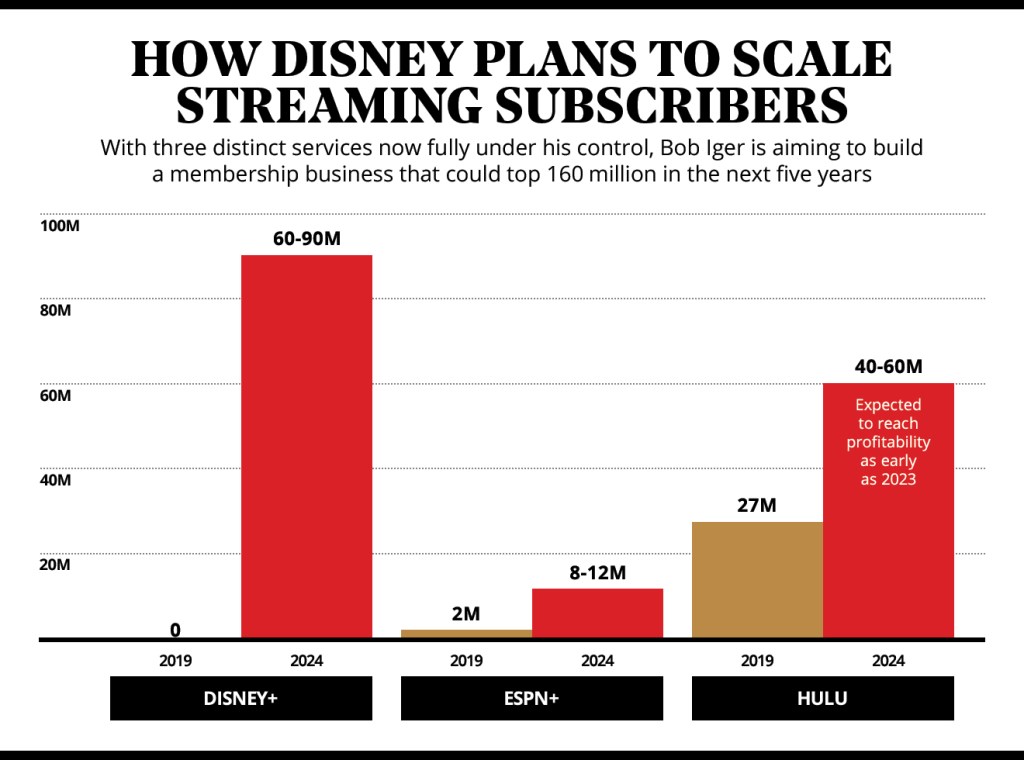 This story appears in the May 22 issue of The Hollywood Reporter magazine. To receive the magazine, click here to subscribe.