Defiance has never been so glamorous.

In May, when 82 women including Cate Blanchett, Ava DuVernay and Agnes Varda climbed the steps of the Cannes Film Festival Palais with their arms locked, they did so to represent the 82 female filmmakers — as opposed to 1,645 male directors — who had been selected to compete over the festival’s seven-decade history.

The #5050×2020 movement began in late 2017, when French director Rebecca Zlotowski attended a secret Time’s Up meeting in L.A. Zlotowski, director Celine Sciamma and Directors Guild members planned the Palais march as their first statement at the fest; the second occurred two days later in a tent on the beach, where Cannes’ three male artistic directors signed a gender parity pledge. It calls for the festival to share data on submissions and board members, and to work toward 50-50 gender parity in executive leadership. Heads of 20-plus other fests, including Venice and Toronto, have signed the pledge.

“This image gave our movement extraordinary visibility,” says Delphyne Besse, a French sales agent. She and other organizers are collecting data on festivals and gender, and intend to publish their first report at Cannes in 2019. 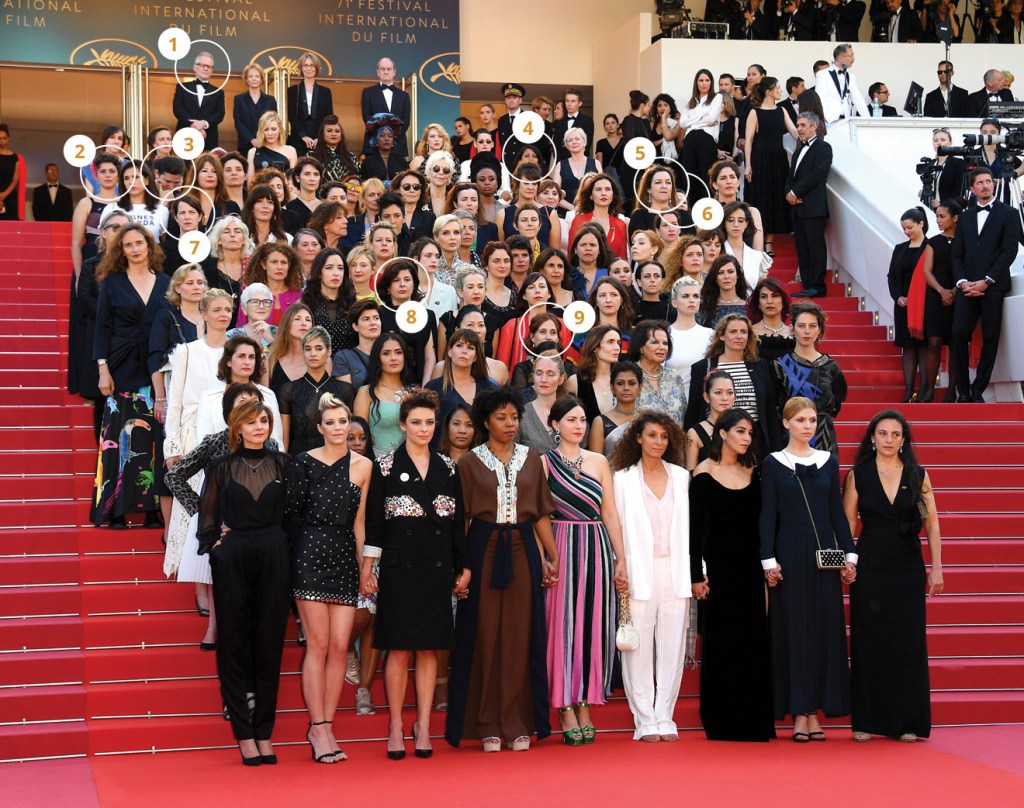 “The event that took place … is something historic when it shouldn’t be. And yet it also means that it is the end of an era, the end of a cycle.”

“A feminist Brazilian producer friend  told me they were planning to do a feminist act at the festival, and I said, ‘Of course!’ Since Cannes, the French minister of culture has signed a deal that by 2020 [government funding for film] will split resources 50/50 between genders. This inspires other public funds as well.”

“I was raised by a feminist mother and a feminist father [but] all women of my generation didn’t have my luck. It was a right moment to do this.”

“We were all wearing our 5050×2020 pins. There was this power of women coming together from all over the world, in an industry controlled by men. For me, the red carpet is stressful. I’m not used to being in front of the camera. I’m But this was a moment to celebrate.”

“I thought it was going to be a grassroots gathering. I realized it was far more organized than that. The French love pomp and circumstance. They had a festival car meet us. They even offered hair and makeup! It was about, ‘We want you to understand that we take this seriously.’ “

“Cannes has a terrible track record for women; this was Harvey Weinstein’s stomping ground. For many years, they’ve said, ‘This is not our problem.’ This year, women were taking back this place where they’re usually on display, taking back the whole concept of the red carpet, repurposing it for our rebellion.”

“This year, I presided on the Jury of the Camera d’Or and it was inconceivable for me not to be with the other 81 women. On the steps, I was suddenly seized with an extremely strong, deep emotion… something was changed, something was rocked.”

“A core group of about 10 women organized. It took a lot of WhatsApping, calls, meetings, back and forth with Cannes protocol, Cate Blanchett, Agnes Varda. We joked that we could become wedding planners after this experience if ever we had to change careers.”

“As an editor, it was important for me to stand there alongside the visible ones like actresses and directors. Due to safety reasons, we couldn’t talk about it until the very last moment and we had only a few minutes to get to the car and go to the stairs. When we climbed the steps in silence, I thought about my daughters hoping this will help them to have access to the jobs they’ll choose with the salaries they deserve.”