They were on their feet in the subterranean control room at Fox News headquarters in New York when at 2:40 a.m., anchor Bret Baier called Pennsylvania for Donald Trump. The state, one of several Rust Belt electorates Hillary Clinton was predicted to dominate, instead clinched the presidency for the erstwhile reality show star and billionaire-turned-populist. It was, Baier remarked, “the most unreal, surreal election we’ve ever seen.”

Fox News granted The Hollywood Reporter access to its gleaming new $30 million studio during the network’s all-night coverage of what would turn out to be the most surprising election in decades. When Baier said on-air that no one saw this result coming a year ago, or even a few months ago, a producer yelled: “This morning!” To which Jay Wallace, the network’s executive vp news and editorial, added: “Three hours ago!”

Indeed, more than eight hours earlier, at 6 p.m. when Baier and anchor Megyn Kelly took their seats at the new street-level studio, the polls and the collective media establishment had Hillary Clinton as the overwhelming favorite to become the 45th president of the United States.

At the start of the night, about 50 bystanders had gathered behind metal barriers outside Fox News on Avenue of the Americas in midtown, where the network was providing a live feed of the coverage. Most were Trump supporters — as evidenced by the chorus of cheers that would erupt each time a state was called for the GOP candidate. And as the night wore on and Trump’s victory became more likely, the crowd swelled.

The studio, with an enormous retractable digital chandelier, which Kelly dubbed “the chandy,” resembled a construction site a mere week ago, said staffers. There is a glass- enclosed green room festooned with monitors right next to the studio. And the network’s decision desk, which in elections past was quarantined far from the studio, on this night was set up just out of camera range and separated only by a blue curtain. Arnon Mishkin, whom host and decision desk member Chris Stirewalt called “nerd No. 1,” advised the decision desk team at the top of the evening that they would wait until after the state polls closed to call races, a promise they and other news organizations made to Congress.

Commentators (including George Will, Charles Krauthammer and Fox News hosts, including the cast of The Five (Dana Perino, Juan Williams, Eric Bolling, Kimberly Guilfoyle and Greg Gutfeld) holed up in the green room across the hall from the studio where two flat-screen TVs were tuned to Fox News and Fox Business Network, which was muted.

The entire floor of the new studio was a hive of activity, and the close quarters made for some inherent logistical challenges. Producers ferrying guests and hosts to and from the desk adjacent to Baier and Kelly urged them to be quiet. When one floor producer accidentally crashed a rolling chair into a table with a loud rumble, Chris Wallace quipped: “Oh, we have to be quiet, huh?!” 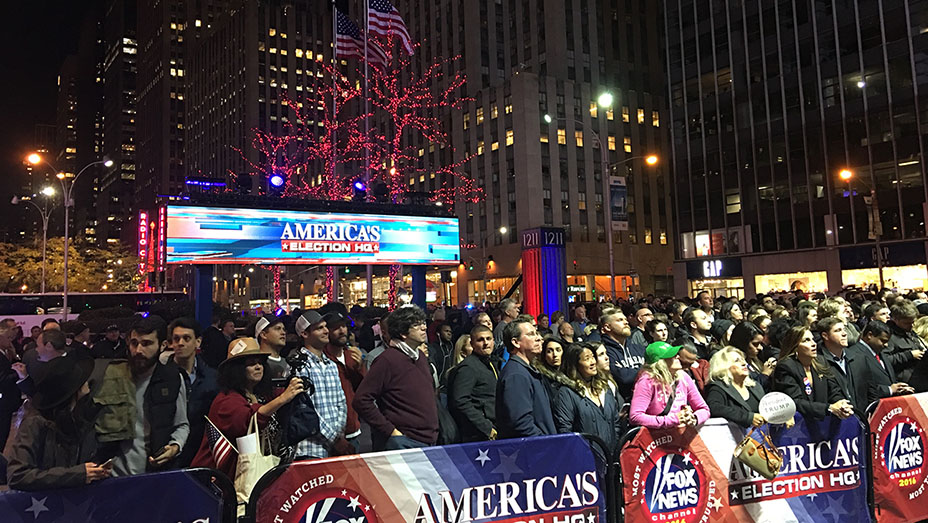 At 7:25 p.m., Bill Shine — who in August, in the wake of the ouster of Fox News chief Roger Ailes amid sexual harassment claims, was upped to co-president with Jack Abernethy — arrived in to the studio. Five minutes later, Rupert Murdoch, the 85-year-old executive chairman of Fox News and its parent company 21st Century Fox, walked in with his teen daughters, Grace and Chloe. He was greeted warmly by Williams, one of the network’s liberal hosts. Murdoch gave his phone to Shine to snap a picture of the three of them in front of the network’s new set, which boasts 14 cameras, 34 monitors and more than 5,000 square feet of studio space, including the main downstairs studio (3,675 square feet) and a balcony (1,750 square feet).

By 8 p.m. when polls closed in a slew of states including the Democratic strongholds of New Jersey, Massachusetts and Connecticut and the traditionally red states of Texas, Missouri and Mississippi, Trump surrogate Rudy Giuliani was given a mic in preparation for a remote live shot from Trump Tower. He blinked rapidly as he waited, his face beamed onto the enormous screen opposite the anchor desk. Kelly threw to him at 8:10 p.m. “Women are not coming out for Donald Trump,” she said, asking Giuliani if the campaign should have done anything differently to court females. Of course, it became a moot point by the end of the night. And by 8:30 p.m. Florida was too close to call, but was beginning to lean toward Trump.

At 8:48 p.m., Kelly told viewers: “We have not been able to make a call on Virginia, which she was supposed to be running away with.” Clinton will eke out a win in Virginia, but it didn’t matter. By 10:22 p.m., in the control room, a producer told Wallace NBC News had just called Ohio for Trump. A minute later, Baier told viewers that the Dow had plunged 600 points in futures trading. And as the presidency was leaning decidedly toward Trump, another producer mused: “The most hated man in Washington tomorrow? James Comey.” Of course, the FBI director’s disclosures about the investigation into Clinton’s emails had been much cogitated in the closing days of the campaign. At 10:53 p.m., Kelly asked contributor and Democratic strategist Mo Elleithee: “Are you starting to freak out that Hillary Clinton may lose this thing?” Elleithee attempted to put on a brave face and explain a Clinton path to victory, but it rang a bit hollow.

As the night wore on and key swing states including Pennsylvania and Michigan were still too close to call, others began to fall to Trump. Wisconsin was among the first reliably blue states that went Trump. And when it did, around 11:30 p.m., a producer in the control room asked for a split screen of Clinton’s and Trump’s respective headquarters, “The sad and happy people.” As the camera brought up Clinton’s headquarters at New York’s Javits Center, Kelly noted: “Look at the scene, it’s very somber.”

Kelly made multiple trips through the blue curtain to talk to Mishkin at the decision desk, asking why they couldn’t call so many of these battleground states. Of course, it didn’t have the same dramatic stagecraft it did back in 2012 when she walked the long hallway back to the decision desk to ask the Fox News number crunchers about Ohio. “It’s a much shorter walk,” she said, “thanks to our new studio.”

When Baier took the network’s coverage to a break at 1:36 a.m., he noted with some wonderment that the 2016 election is “one of the biggest stories any of us have ever covered.” Kelly, who tussled with Trump several times during the campaign, looked at him with a raised eyebrow: “Or will ever cover.”

Later, after Trump delivered a gracious and uncharacteristically short acceptance speech, Shine marveled at the past year — both the volatile campaign and the internal drama at Fox News. “Tomorrow,” he said, standing in the control room, “it all starts again. We’re going to be busy.”