Like a quarterback shrugging off a sack, the NFL is brushing off doubts about its ratings supremacy among U.S. TV viewers. Linear ratings for the league hit a multiyear bottom in 2017, prompting a rash of speculation about whether pro football’s stranglehold atop the Nielsen charts was coming to an end. But now, as ratings for other programming keep declining, the audience for the NFL is rising.

Through six weeks of the season, NFL games across all its television partners are averaging about 16.3 million viewers, up 3 percent from last season’s average of 15.8 million. Since hitting a low for this decade of 15 million viewers in 2017, viewership has climbed 9 percent and is on par with the 2016 season (16.5 million).

What happened? Explanations for the rebound range from more exciting play on the field — scoring and other offensive metrics have boomed in the past season-plus — to the presence of high-profile young quarterbacks like Patrick Mahomes of the Kansas City Chiefs and Baker Mayfield of the Cleveland Browns to the NFL no longer being the culture-war battleground that it became in 2016 and 2017 thanks to Colin Kaepernick.

“If the conversation around football is primarily about the game, then we’re probably winning,” says Michael Mulvihill, executive vp and head of strategy and analytics at Fox Sports, which has the Super Bowl this season. “And if the conversation is about topics away from the game, we’re probably losing. I think the focus for the past season and a half has become more where we’d like it to be, which is just on the games.”

The growth of fantasy sports and the spread of legalized betting to a handful of states other than Nevada also has helped fuel the TV ratings, says Michael Nathanson, media analyst at MoffettNathanson. “One of the things we noted early this year is gambling is picking up a bit,” he says. “As gambling becomes legalized, there’s definitely more interest in sports and watching things live.”

Off the field, discussion about player safety as well as former San Francisco 49ers quarterback Kaepernick’s protests during the national anthem (and the resulting backlash, including from President Trump) has receded somewhat. Ratings have bounced back across all demographics, says Mulvihill, with the number of women viewers rising somewhat more on a percentage basis than men (though males still make up the majority of viewers).

The NFL’s improving ratings fortunes come at a time when ad-supported TV as a whole is in the midst of a sharp decline: “Even in the years where ratings were down, the relative strength of the NFL compared to the rest of television was actually getting stronger,” says Mulvihill. “Now that things are back on a positive trend, I think the league is separating itself even further from everything else in the marketplace.”

NFL games (afternoon and primetime) make up large majorities of the 50 most-watched programs each year. During the past three full seasons, the NFL averaged about 1.9 million more viewers than the same-day audience for the most-watched primetime show. This season, the gap is more than 4 million viewers. Dramas and comedies will close that when delayed viewing is factored in, but for broadcast, Roger Goodell’s league remains the surest bet to gather a big audience all at once — which means networks can charge a premium for ads. A 30-second spot on NBC’s Sunday Night Football costs $685,000 on average, while ads on Fox’s Thursday Night Football go for $540,000 — well above the rates for even the priciest primetime entertainment show, This Is Us ($359,000).

The NFL’s TV rights come up for bid again in 2021 (ESPN’s Monday Night Football package) and 2022 (CBS, Fox and NBC). Nathanson projects an increase of 30 percent or more in rights fees over the combined $5.6 billion a year networks now pay — which, he says, still makes sense for the broadcasters. “The last ESPN deal was inefficient, and the ROI doesn’t make sense for cable networks,” says Nathanson, noting that ESPN pays $1.9 billion per year for Monday Night Football, while the broadcast nets dole out slightly more than $1 billion each.

One thing Nathanson doesn’t see — at least for the near future — is a streaming platform becoming the primary outlet for one of the TV packages. “It’s too disruptive. But [there could be more] around the edges like they’ve done with Thursday night and Amazon [which streams most of those games],” he says. “But I think the NFL understands, as long as the broadcast monetization system is still there with retrans, they don’t want to blow up the ecosystem.”

With teams like the Dallas Cowboys, New England Patriots, Green Bay Packers and the 49ers set for some two dozen national telecasts during the rest of the regular season, Nathanson and Mulvihill see the ratings momentum continuing, a trend that bodes well for the Feb. 2 Super Bowl (last year’s game slipped below 100 U.S. million viewers for the first time in 10 years).

“I also think we as Americans want an escape from all the political back-and-forth,” says Nathanson. “You have a bit of escapism, you have higher scoring, you have some younger players, perhaps you have some gambling influence. It’s all kind of working together.” 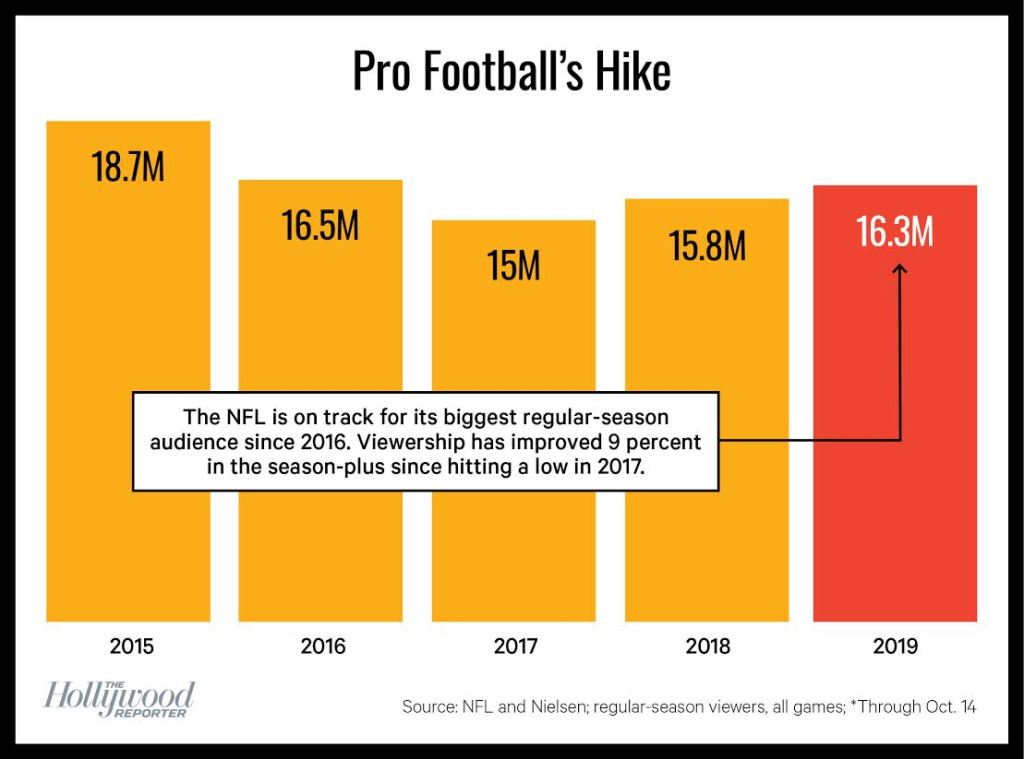