De-urbanization has become a growing trend amid the COVID-19 pandemic, as people across the country leave major cities for suburbs and less populous states. It’s no different for the entertainment community. Stars, creatives and execs who were already unhappy with taxes and congestion in L.A. and New York are taking advantage of the remote work environment and making the move.

The Hollywood Reporter surveyed this year’s Power Business Managers to find out how many of them were seeing clients make the leap, and it turns out nearly three-quarters of those who responded said some clients were already moving and others were seriously considering it. Most of those aren’t just biding their time until the pandemic ends, either, and intend to relocate long term.

Hot spots are popping up across the country with states that have low to no income tax creating a significant draw. Here’s what the experts told THR about the trends. 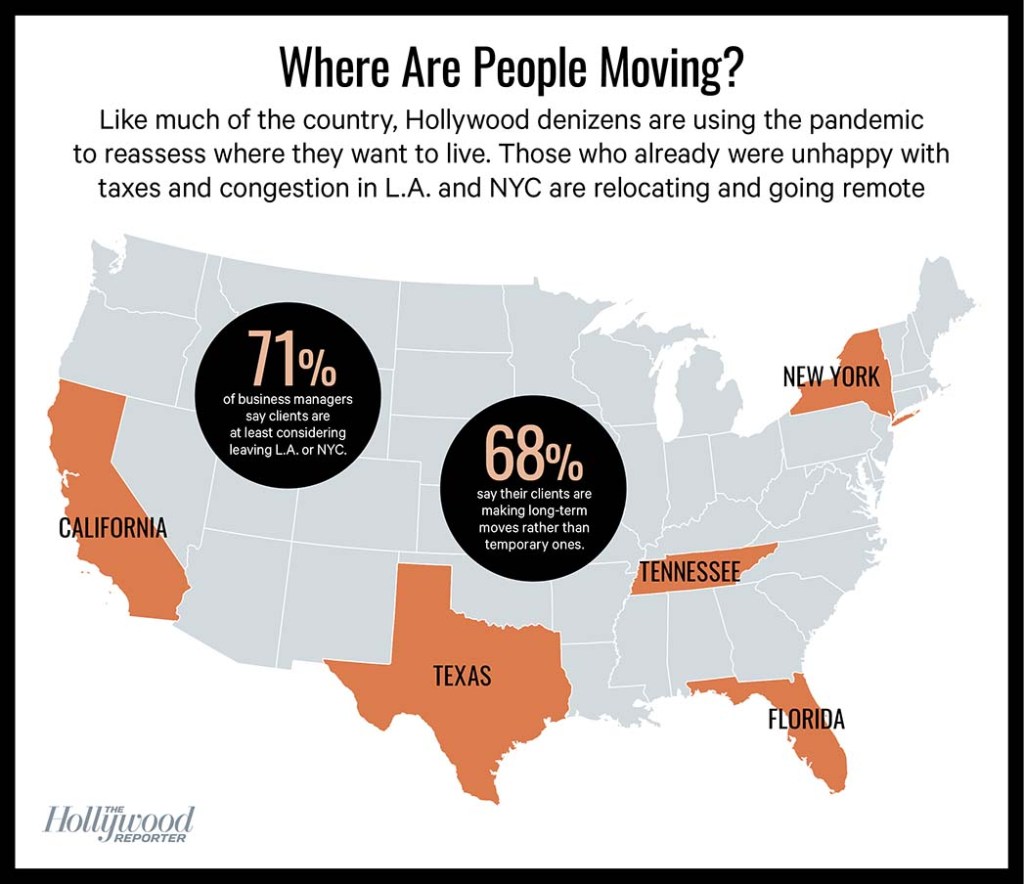 “Both in NYC and L.A., clients have moved within about 45 minutes outside of the city since they now realize that meetings can be done remotely,” says Fulton Management’s Eric Fulton. “The areas are attractive because of their privacy, the ability to raise a family in a safer, less hectic environment, and your money buys more home [or] land the farther you go out.” Palm Springs, Ojai and Santa Barbara are popular locations in Southern California, and Sacramento is drawing some attention up north.

“Texas seems to be near the top of everyone’s list,” according to THR’s anonymous survey of the industry’s top money managers. The Lone Star State, and Austin specifically, continues to be attractive to both individuals and businesses. The longtime home of South by Southwest offers more space, less congestion and a state constitution that forbids income tax as of 2019 — which all contribute to its high ranks on several real estate industry reports done since the start of the pandemic.

East Coast city dwellers are headed upstate, where the Catskill Mountains are especially popular. “It is a reasonably manageable drive, which allows for weekend getaways,” says DL Business Management’s David Levin of those opting to buy a second home instead of relocating for good. “The NYC resident who has opted to stay close to their offices has the ability to breathe fresh air and be in nature, away from their elevator apartment buildings, most likely at a more affordable price than a typical Hamptons beach house.” (But some note the Hamptons is still popular for the Hollywood set.)

“The public education here is fantastic,” says business manager Lou Taylor of schools in Williamson County, a suburban area south of Nashville. “Many who relocate don’t feel the need to put their kids in private school, which is almost required in New York and California.” Taylor adds that the lack of state income tax is a draw — especially as California mulls AB 1253, which she describes as a “millionaires tax” — and it’s geographically convenient to both coasts: “Nashville is a three-and-a-half-hour flight to L.A. and a 90-minute flight to NYC. You can fly to NYC to do a day of meetings and return by dinner to Nashville.”

The lack of state income tax also is luring Californians to the Sunshine State, with several business managers noting clients have purchased homes in Florida in THR’s annual anonymous survey. “Clients who don’t have a contract on a show tend to be open to really living just about anywhere now,” says Fulton Management’s Elizabeth Ricin. “The thought process being that regardless of where ‘home’ is, they’re going to have to relocate for a movie or short-term job based on where it is filmed.” Idaho, Nevada, Colorado, New Mexico, Montana and Washington also were mentioned in the survey as attractive for those considering a move. And New Zealand and Canada are luring stars who want to leave the country altogether.