Cardi B’s star has been rising meteorically in both music and fashion. The first chart-topping female rapper since Lauryn Hill has been causing a fashion frenzy since she wowed during New York Fashion Week appearances at Helmut Lang, Christian Siriano, Fenty x Puma and Alexander Wang’s afterparty in September and stepped out a day later in a regal, ice-blue, off-the-shoulder Christian Siriano gown at Rihanna’s Diamond Ball. So there is high anticipation to see the new fashion darling’s moves during her turn on the red carpet and performance at today’s Grammy awards, where “Bodak Yellow” is  nominated for best rap performance and best rap song.

THR spoke exclusively to Cardi B’s stylist Kollin Carter, who confirmed that she will be joining Kelly Clarkson, Rapsody and others in wearing a white rose on the carpet, which in her case will adorn a pleated white lace gown with butterfly sleeves by Saudi-born, Beirut-based fashion designer Mohammed Ashi, creative director of Ashi Studio, who has designed three custom looks in all-black or all-white for the rapper to wear this weekend. The first was the elegant, strapless ivory crepe tuxedo-inspired gown that Cardi donned at last night’s Clive Davis pre-Grammy gala, followed by today’s red carpet gown and another look to be worn onstage during her performance with Bruno Mars. 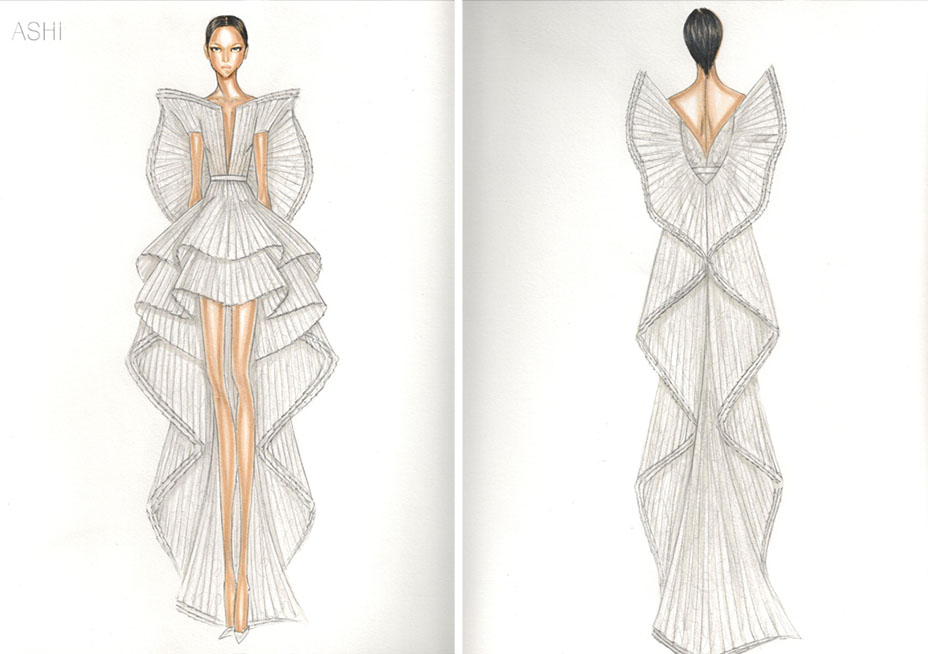 Walking the red carpet on Sunday night, the star told E!’s Giuliana Rancic, “I’m feeling good. I’m feeling nervous, overwhelmed, everything. Butterflies in my stomach and vagina!” “OK,” Rancic responded with a laugh, adding, “I love you. Why do I love you? Well I know why, the same reason everyone loves you, because you speak your mind, Cardi B, you do not hold back.”

She doesn’t hold back when it comes to fashion, either.

“I tend to stick to a palette of off-white and black because it’s the aesthetic for the house; we do dramatic volumes and embroidery, so I try to keep it basic with the color,” explained Ashi, by phone from Beirut, noting that the house introduced some strong, vibrant colors for the first time in the spring 2018 collection. “We wanted to do something that represents us and, at the same time, fits Cardi B’s outspoken personality, so we sent her a couple sketches. We finally came to an agreement two weeks ago. We were originally working with a color but, at the last minute, we decided not to introduce any colors. We made something very theatrical and powerful in terms of the structure of the dress, so the structure will speak more loudly than the color. That’s true of all the looks she’ll be wearing. We stayed with a tonality of black or white, but in different shades. The most striking outfit is going to be in black with a short hemline in front and a long hemline in back, which is one of our signature looks. It has a plunging V-neckline and broad shoulders. It’s a statement piece.” 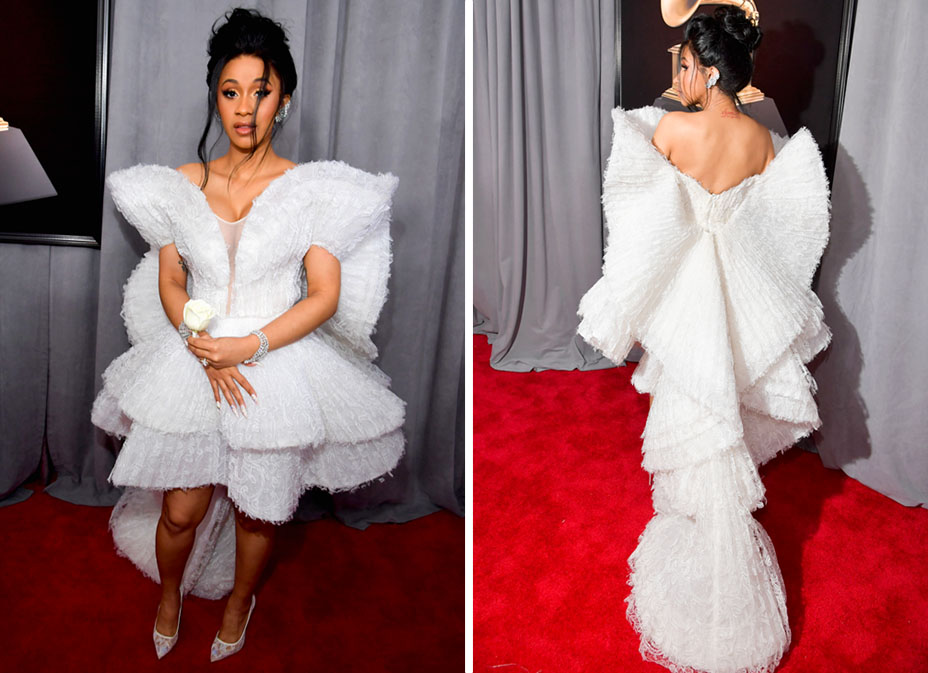 (Ashi designed the black strapless high-low couture gown, crafted of hand-beaded vintage lace with ostrich feather trim, that Heidi Klum wore to the Golden Globes last month, and he hinted that Klum might be wearing another of his creations tonight. As might Lady Gaga, who donned multiple Ashi Studio gowns in her role as Elizabeth on American Horror Story: Hotel.)

Carter hinted that Cardi’s onstage look will also include some colorful pieces by Jeremy Scott for Moschino “because it’s super-‘90s and colorful and fun,” or the L.A.-based, hip-hop-oriented fashion brand Cross Colours, launched by Carl Jones in 1989, “that brought in the whole color-blocking wave.”

“With Time’s Up going on, I wanted to be sure that we kept everything super-fun (because Cardi’s fun and goofy and she likes to play around) but remained timeless, classic and elegant,” said Carter. “I can say that the new memo has been on my side because it’s everything that I wanted to do anyway, as far as the black and looking sophisticated. I feel like we have been heading in that direction. It is also standing for something through fashion, which is so powerful to me. She will look like a butterfly on the red carpet, like she has wings. Let’s just say that by the end of the carpet, she’ll be America’s angel.”