According to data compiled by social intelligence company Synthesio, Capcom and Nintendo can both claim to have “won” E3 — depending on which metric you consider.

In terms of sheer volume, Nintendo was the winner, with 27.5 percent of all discussion around E3 mentioning the brand. Sony followed closely behind, driving 21.2 percent of E3 social media conversation. In third place, however, was Polish publisher CD Projekt, which drove 11.1 percent of social conversation off of the reveal trailer for its new RPG, Cyberpunk 2077, which capped off Xbox’s June 10 press conference. Even more impressive considering that CD Projekt didn’t have a booth on the convention floor — only a meeting room open to press and industry badge holders that was overflowing throughout the three-day con, with people trying to get in for a glimpse at the gameplay demo — unlike Nintendo and Sony, which together dominated the massive West Hall of the L.A. Convention Center.

Rounding out the top five in mentions were Bethesda (10.8 percent), which offered up new games in its popular Fallout and Elder Scrolls franchises, and Microsoft (8 percent), which despite breaking a Twitch record for concurrent streams with its pre-E3 presser, wasn’t a major topic of discussion on the show floor. 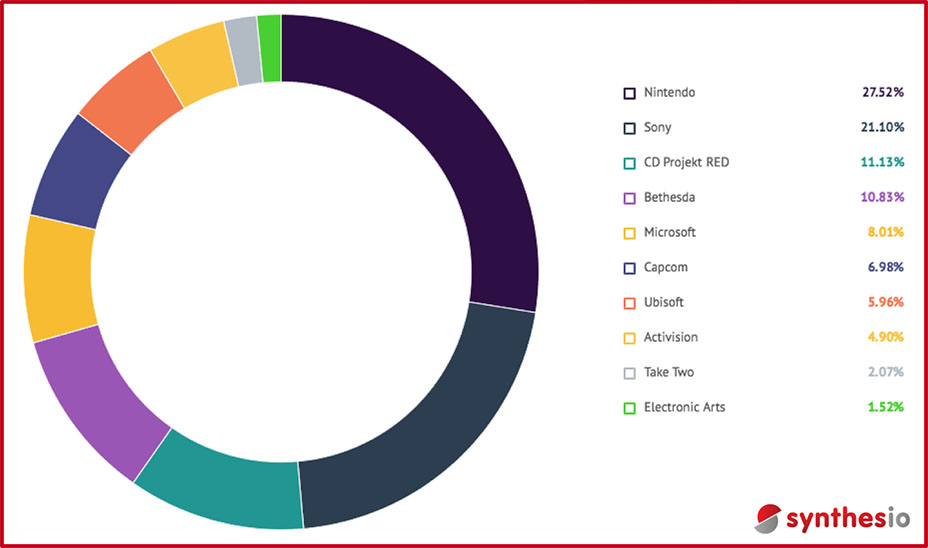 However, Synthesio also released what it calls a “social reputation score,” which takes into account not only number of mentions, but also whether the sentiment expressed was positive or negative, and assigns a number between 0 and 100. Also, the mentions are weighted by influence, so those with more impressions and interactions have a greater effect on the score. According to this metric, Capcom was the winner with a score of 78.89, followed by Ubisoft (74.24), Microsoft (73.73), EA (72.99) and CD Projekt (69.99). Indeed, Capcom brought news, trailer reveals and demos from many of its beloved franchise — including Mega Man, Resident Evil, Monster Hunter World and Devil May Cry — to the con, so its strong showing on social media isn’t a surprise. And Ubisoft’s two major titles — The Division 2 and Assassin’s Creed Odyssey — both generated tons of buzz. Nintendo ranked sixth with a score of 66.99, due to 33 percent of all mentions being negative in sentiment. Perhaps leaving Waluigi out of Smash Bros. Ultimate was just too much for some fans? 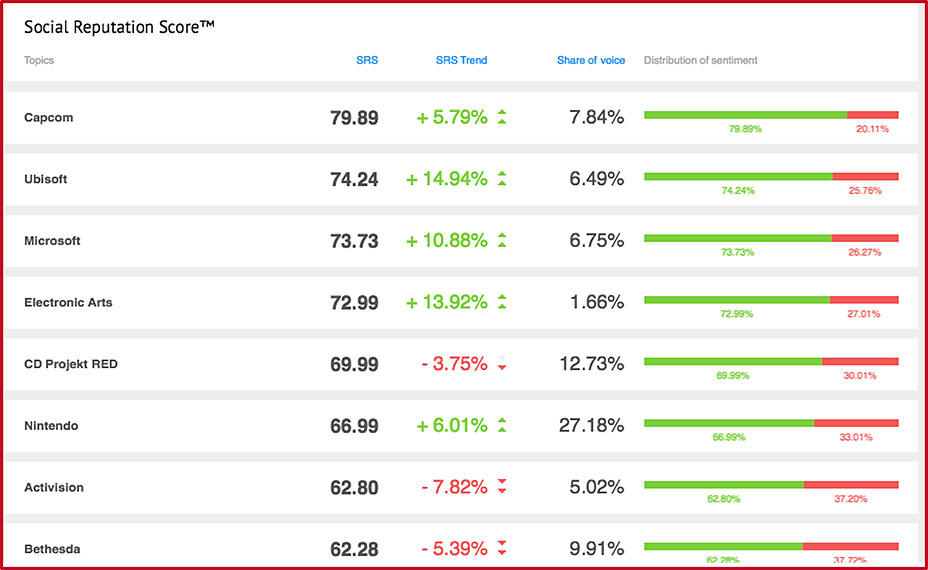 Synthesio pulls data from a number of platforms to compile its rankings, including Twitter, YouTube and online forums.

E3: The Games That Stood Above the Pack

How DC Has Weathered Corporate Change Before

'Night of the Cadillacs' Is a Horror Comic Rooted in L.A. Diners and Dive Bars